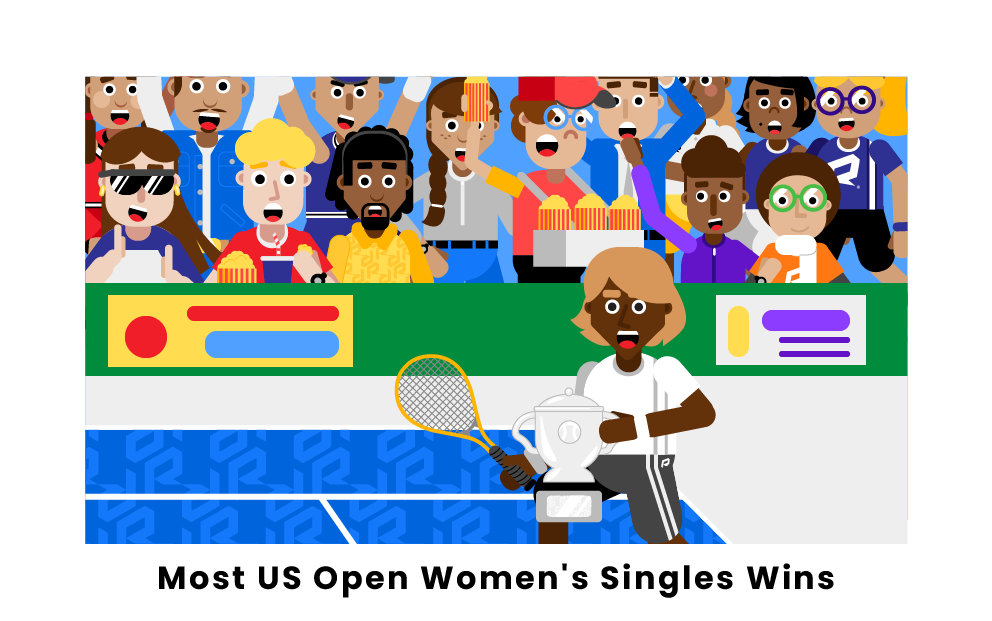 Which women’s tennis players have the most US Open Singles Championships Wins?

With three Grand Slam titles already under her belt, Chris Evert played her first US Open finals match in 1975. She played against Evonne Goolagong and won in three sets (5–7, 6–4, 6–2). She successfully defended her title three times in a row after that against Goolagong, Wendy Turnbull, and Pam Shriver. After a narrow loss to Tracy Austin in 1979, Evert returned and won against Hana Mandliková in three sets. In 1982, she won her sixth and final title against Mandliková in two sets (6-3, 6-1). While Evert held the title herself for years, she is now tied with Serena Williams for the all-time record for most wins in the US Open Women’s Singles division.

As a titan of modern tennis, Serena Williams has made an impressive mark on the legacy of the US Open. In 1999, she played her first singles final against Martina Hingis and won in two sets. After three years, Serena then defeated her sister Venus in sets of 6-4, 6-3. In 2008, she returned to the US finals and won against Jelena Janković. After another several year break from the finals, Williams began a consecutive streak in which she won in 2012 and 2013 against Victoria Azarenka and won a sixth title against Caroline Wozniacki in 2014. This feat tied her with Chris Evert for the most wins in the US Open Women’s Singles division.

After already winning four Grand Slam tournaments, Margaret Court played her first US Open final in 1962 against Darlene Hard and won in two arduous sets (9-7, 6-4). After narrowly losing to Maria Bueno the next year, she did not return to the finals until three years later, when she defeated Billie Jean King in two sets. Court continued her success in the Open Era with an easy win in 1969 against Nancy Richy. The next year, she defended her title against Rosemary Casals and won after three long sets. Three years later, in 1975, Court won her fifth US Open singles win against Evonne Goolagong (7-6, 5-7, 6-2).

In 1988, Steffi Graf played her second US Open final against Gabriela Sabitini and defeated her in three sets (6-3, 3-6, 6-1). It was not only her first US Open win but the last time someone won all four Grand Slam tournaments in a calendar year. The next year, she successfully defended her title against long-time rival Martina Navratilova in three long sets. After several wins in other tournaments and four years later, Graf returned to the US Open in 1993, playing against Helena Suková in the final and winning her third title. She then won her fourth US Open against Monica Seles in 1995 and won her fifth and final win defending her title against Seles the next year.

The US Open was the last Grand Slam tournament for Martina Navratiliva to win, and she completed the feat by defeating Chris Evert in two quick sets. The following year, she won her second title also against Evert but in three more contentious sets. After a narrow defeat to Hana Mandliková in 1985, Navratilova won two other major tournaments before returning to defeat Helena Suková for the 1986 US Open win. The year after, she won her fourth and final US Open title against Steffi Graf in two sets of 7-6, 6-1.

Billie Jean King won her first US Open in the last year of the Amateur Era. In an arduous two sets of 11-9, 6-4, she beat Ann Haydon-Jones for the 1968 win. She then lost her title to Virginia Wade the following year and did not return to the finals for three years. In 1971, she defeated Rosemary Casals in two sets and successfully defended her title the next year against Kerry Melville Reid, also in two sets. In 1974, Billie Jean King claimed her fourth and last US Open Women’s Singles title against Evonne Goolagong in three close sets (3-6, 6-3, 7-5).

After four years of making it to various Grand Slam tournament finals, Kim Clijsters won her first US Open final in 2005. In that match, she faced Mary Pierce and won in two clean sets of 6-3, 6-1. After four further years of failing to make it to any Grand Slam finals, she played and won against Caroline Wozniacki in the 2009 US Open (7-5, 6-3). The following year, Clijsters successfully defended her title against Vera Zvonareva in two sets (6-2, 6-1). Though she never played in another US Open final, she retired with an impressive three women’s singles wins.

Tracy Austin had a short but highly-successful tennis career, and her most prominent wins were at the US Open. At 16, she joined the professional circuit and within a year was playing in Grand Slam finals. In 1979, she won against Martina Navratilova in the semifinals and then defeated Chris Evert in the finals in two sets (6-4, 6-3). At the time, she became the youngest woman ever to win the US Open. Two years later, in 1981, she won a second title against Navratilova in three sets (1-6, 7-6, 7-6).

At only 18, Monica Seles entered her first US Open final with three Grand Slam tournament wins behind her. In the match, she faced Martina Navratilova and won in two sets of 7-6, 6-1. In the following year, she returned with two more Grand Slam titles and successfully defended her US Open title against Arantxa Sánchez Vicario in two sets as well (6-3, 6-3). In 1995 and 1996, Seles returned to the finals but lost to Steffi Graf both times. She sparsely played from then on but retired young with two total US Open Women’s Singles wins.

Venus Williams played her first US Open final at only 17 against Martina Hingis but lost in two sets of 0-6, 4-6. Three years later, she came back and won the Women’s Singles final against Lindsey Davenport in two sets (6-4, 7-5). The following year, she defended her title against sister Serena Williams and also won in two sets (6-2, 6-4). In 2002, Venus faced her sister again in the finals but lost in both sets. Though she never played in a US Open final again and became more famous for her 14 doubles Grand Slam wins, Venus retired with two US Open Women’s Singles wins.

Fresh off a French Open win, Justine Henin played and won her first US Open final against Kim Clijsters in two sets of 7-5, 6-1. After a few years of winning Australian Open and French Open titles but never placing on American soil, she returned to the US Open finals at last in 2006 and lost narrowly to Maria Sharapova (4-6, 4-6). After this loss, Henin bounced back and won one last French Open title and then won her second and final US Women’s Singles match against Svetlana Kuznetsova in 2007.

Just before turning 18 years old, Naomi Osaka rocked the tennis world by playing her first US Open Finals match against Serena Williams. After two quick sets of 6-2, 6-4, she became the first Japanese woman to win a major singles title. After being eliminated in the 2019 semifinals, Osaka returned and won the 2020 US Open final against Victoria Azarenka in three contentious sets (1-6, 6-3, 6-3). Though she was eliminated in the third round of the 2021 tournament and canceled her performance in the 2022 tournament, Naomi Osaka remains early in her career with two US Open Women’s Singles wins.