How Many Games Does A Set Consist Of In Tennis? 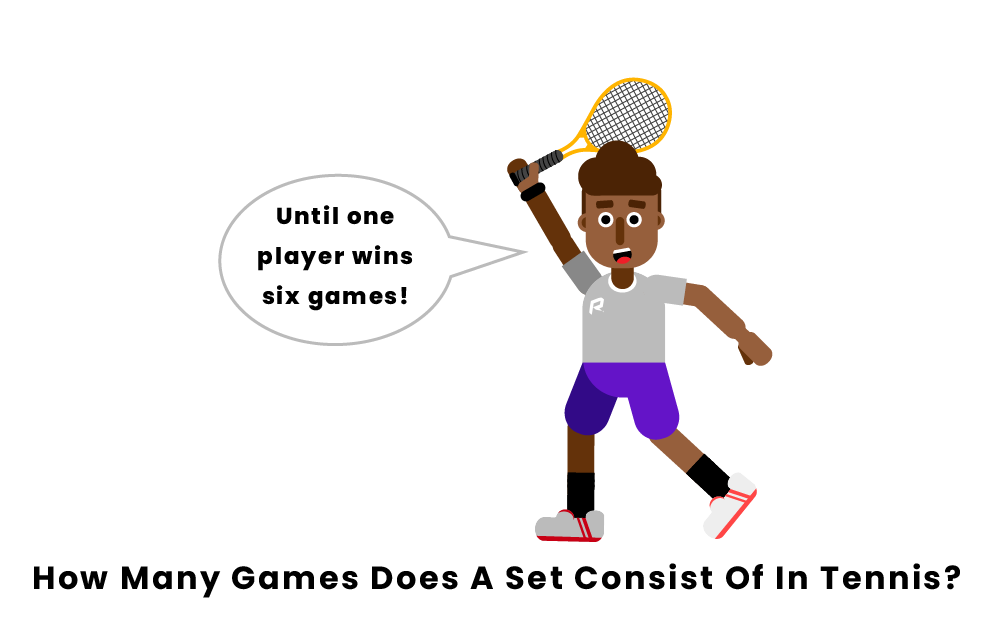 Most people know that tennis matches consist of subdivisions known as “games” and “sets,” and that players play multiple games in one set, as well as at least a few sets per match. But how many games are in a tennis set? What are the different types of scores a set can end on? What is the win-by-two rule, and how do tiebreakers work? Below, we will discuss all of these aspects of the game of tennis.

How Many Games Are in a Tennis Set?

Those new to the game of tennis may wonder: how is it possible to have a score like that in the example above? Don’t tennis sets usually consist of six games, with the first person who reaches six games winning? It is very much true that, in tennis, sets are designed to be won by the first person who reaches six games, but there are certain caveats which allow a score like those above to occur.

In tennis, a set consists of games. The amount of games played in a set all depends on who can reach six games won before their opponent. If both players reach five games each in the set, then a win-by-two rule applies. So, sets can go to 7-5 or 5-7. If the number of games reaches 6-6, then a tiebreaker is used to determine the winner of the set.

In major tournaments like the U.S. Open, the final set has a win-by-two rule and never has a tiebreaker at 6-6. So, it is possible for the final set of a major tournament to reach a high number of games. One of the longest matches took place in the 2010 Wimbledon Championships, where John Isner and Nicolas Mahut had a final set that reached a game count of 70-68.

The Grand Slam Board announced on March 16, 2022 that the final set of majors will no longer be won by two games. A tiebreak is now played at 6-6 in the final set. The winner of the tiebreak must get 10 points and have a win-margin of two points.

6-0 Set: Also known as a “bagel set,” in this type of set, one player wins six straight games while the opponent wins zero games.

6-2 Set, 6-3 Set, 6-4 Set: A more common set is when one player wins six games and the opponent wins two, three, or four games. This is because “breaking” someone, winning when you are not serving, is difficult, and usually only happens once or twice per set.

7-5 Set: With this type of set, one player wins seven games and the other player wins five games. Seven games were needed to win this set because once each player reached five games each, the set was decided with a win-by-two games rule.

7-6 Set: This is the final type of set you will see in a tennis match and happens when both players reach six games each in the set. Since no “breaks” occurred in the set, a tiebreaker is played. The rules of a tiebreaker are different from normal games, and involve the player who first reaches seven points winning the tiebreaker.

One wrinkle in the amount of games played in a set are tiebreakers and the “win by two” rule. A player cannot win simply by reaching six games first, because if that is the case, it will give a strong advantage to the player who serves first. If no “breaks” occur, a score of 6-5 can happen, with the player serving first usually winning the match. That is why, in order to win a set one has to win by two games if the score is 5-5 or 6-5. If the score is 5-5 or 6-5, another game or two will be played until a score of 7-5 is achieved.

If the score ends up 6-6, different rules apply in different major tennis tournaments, but the most common rule is a “tiebreak.” This added set is played, not on a “0, 15, 30, 40” scale, but on a numerical scale from one to seven, also with a win-by-two points rule. The player set to serve first serves, then the other player serves twice before switching back to the first player to serve twice as well. The scores go up until one player has gotten at least seven points and has won by two more than their opponent.

Common tiebreaker scores are 7-5, 8-6, 7-4 etc. In major tournaments, a tiebreaker is used in the final set (third set for women, fifth set for men) if the score is tied at six games-all. The tiebreaker goes first to 10 points and to win by a two-point margin.

Pages Related to How Many Games Does A Set Consist Of In Tennis?