How Long Is A Tennis Match? 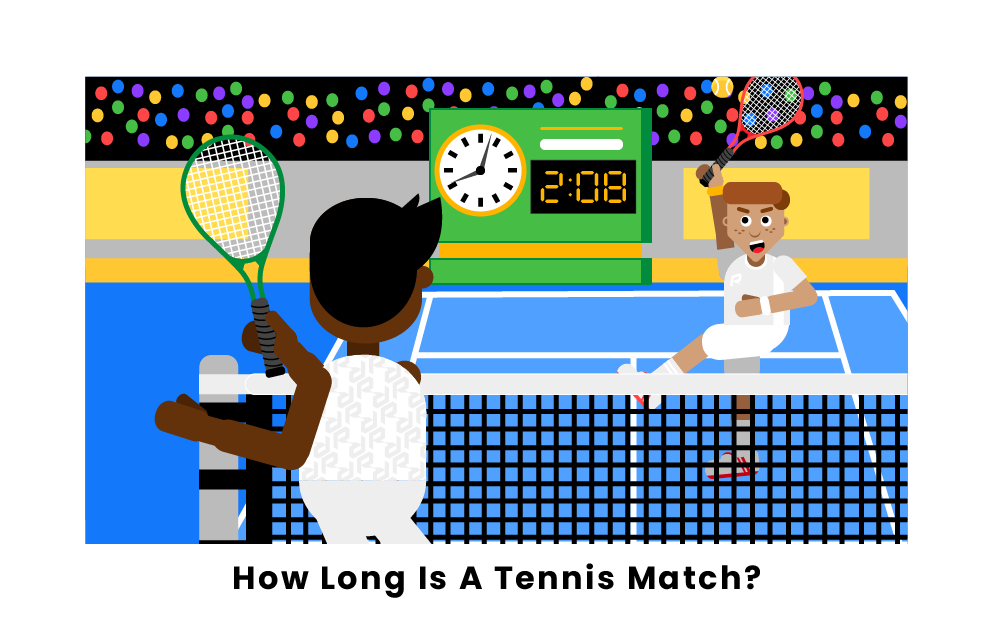 Since the sport of tennis has no clock, the length of a match can vary quite greatly. Some of the longest matches in history have taken over six hours to complete, and some quicker matches are over in 30 minutes. This variability is dependent on a few factors, mainly whether the match is best-of-three sets or best-of-five sets, the difference in ability of the two competitors, and the surface the match is played on.

To look at the length of a tennis match, one must first understand how they are structured. In a best-of-three set match, the first player to win two out of a maximum of three sets wins the match. If one player wins the first two sets, the match is over, and the third set is not played. When the match is set up as a best-of-five, the first player to win three sets out of a maximum of five wins. Similarly, if one player wins the first three sets or three of the first four, the remaining sets are not played. In order to win a set, a player must win six games, and to win a game, a player must win four points. There are other rules and nuances, but for the purpose of this article, these basics will suffice.

Now that there is a basic understanding of the structure of a tennis match, the length of them can be better understood. As can be seen above, matches have a clock that counts up during the match so that everyone knows how long the match has been going on. First, the majority of tennis matches are played as best-of-three sets, so let’s look at their typical length. On average, best-of-three set tennis matches last about an hour and a half. This can be shorter or longer depending on a few factors. If one player is significantly better than the other and the sets are over quickly, the match can be over in less than 30 minutes. If the competitors are evenly matched and play a tight match, the match can take over two hours.

Lastly, all of these same factors are true when it comes to five-set matches; they just naturally take longer by design. The only time five-set matches are played is in the men’s tournaments at grand slam events. These events are the Australian Open, the French Open, the U.S. Open, and the Wimbledon Championships. All other men’s tournaments, as well as all women’s matches, are best-of-three matches. With that in mind, a typical five-set match lasts around 2 hours and 45 minutes. With the same factors in mind that were when discussing best-of-threes, best-of-fives can be over in an hour at their quickest or take upwards of five to six hours at their longest.

What Are Some of the Shortest Tennis Matches of All Time?

Naturally, the fastest tennis matches of all time are best-of-three matches. The fastest match of all time that was recorded took place at the 1946 Surrey Open in England. In this match, Jack Harper defeated J. Sandiford in just 18 minutes. All of the factors that lead to quick matches were in play here; it was best-of-three sets on a grass court, and Harper was a significantly better player than Sandiford. Harper did not lose a game and, in fact, lost just one point the entire match. On the women’s side, the fastest match of all time took place at the 1963 Eastern Grass Courts Championships in New Jersey. In this match, Margaret Court defeated Darlene Hard in 24 minutes. Court lost just two games during the match. Once again, this was a best-of-three match on a grass court where one player was way better than the other. Court was one of the best women’s players of all time, and Hard was a little-known challenger. Lastly, the fastest match of the 21st century took place in 2001 when Francisco Clavet defeated Jiang Shan in just 25 minutes at the Heineken Open in Shanghai. Like Harper, Clavet did not lose a game during the match.

What Are Some of the Longest Tennis Matches of All Time?

The longest tennis match of all time deserves a story all to itself. At the 2010 Wimbledon Championships in England, John Isner defeated Nicolas Mahut in 11 hours and 5 minutes. The players did not play for 11 hours straight, and rather the match was spread out over the course of three days so that it could be finished around the other matches of the tournament and limited daylight. The reason this match lasted so long was due to one of the quirky nuances in tennis rules. While a set is normally over when a player wins six games, one cannot win a set six games to five; rather, they need to win the set by two games. If a set is tied at six games apiece, however, a tiebreak is usually played.

The basic premise of a tiebreak is to end matches quicker. In 2010, however, the Wimbledon Championships did not have players play a tiebreaker in the last set. That is why the score of the final set in the Isner Mahut match was 70-68. The players had to play the last set until someone was ahead by two games. To put in perspective how unusual this match was, the second-longest match of all time lasted 6 hours and 43 minutes between Leonardo Mayer and Joao Souza at the 2015 Davis Cup. The Isner-Mahut match lasted over four more hours than this match. While an immediate change was not made, all four of tennis’s grand slam events have now introduced a fifth-set tiebreak. This means that we will likely never see another match quite like the Isner-Mahut marathon of 2010.

Pages Related to How Long Is A Tennis Match?