How Does Scoring Work In Tennis? 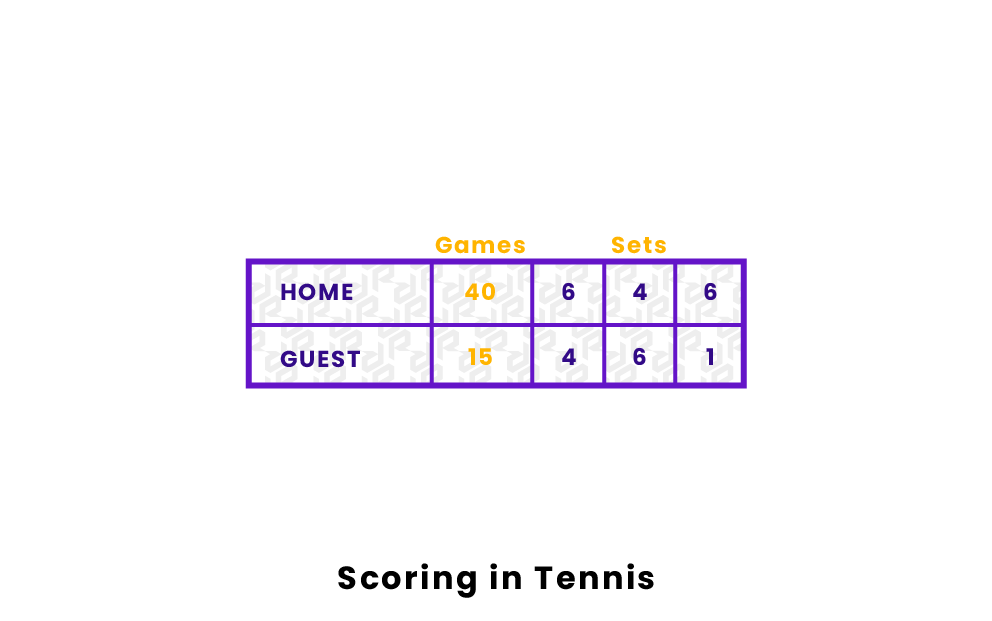 Tennis is a popular international sport that is fun for all ages. However, the sport has many unique rules and terminology, especially related to scoring. Find a complete explanation of how to score a tennis match below.

How Does Tennis Scoring Work?

There are three main components to the scoring system in tennis. Before breaking down the point system, you should know that in tennis there are games, sets, and the match. The match is the proper term for the entire competition and each match is made up of sets. A game consists of points, and a set consists of games won.

The scoring system in tennis is the same for both singles and doubles play. The only difference in gameplay is the boundaries on the court. In singles play, the alleys are out of bounds, and in doubles play, they are not. The player (singles) or team (doubles) who wins the most sets wins the match.

How Do Games Work?

The point tier in tennis goes as follows: both players start at 0. After scoring one point, a player will now have 15. The next point won would bring the player to 30. Following that, another point won brings a player’s score to 40. If the player with 40 wins the next point (assuming that the score is not tied at 40), they will win that game and now lead the set 1-0.

Tennis games and matches traditionally use a win-by-two format. If both players have 40 points, they are in what is called “deuce.” The next point won when in “deuce” gives that player the advantage, which, in short, means if they win the next point, they win the game. However, if the player that does not have the advantage wins the point, the game returns to “deuce.”

Though the standard scoring system includes the deuce and advantage scoring layout, there are unique times when that standard will be disregarded, and the next point after 40-40 wins the game. The most popular example is a fifth set tiebreaker, a rule used by all Grand Slam tournaments that the fifth set in a match needs to only be won by a single point once players have reached a game score of 10-10.

When a set gets to a score of 6 - 6 in games, then there is what is known as a “tiebreaker.” To win a set tiebreaker, a player must have a score of at least seven points and also have two more points than their opponent. Tiebreaker scoring is sequential, starting at one. So, for example, a player could win a tiebreaker with a score of 7-5, 8-6, 9-7, etc.

How to Score Points In Singles

How to Score Points In Doubles

The scoring in doubles play is the same, except that the doubles alleys are in-play. This means that hitting the ball into the alleys does not result in the other team receiving a point but rather continues play until another player hits the ball into the net or behind the baseline.

Tennis matches can typically drag on for hours on end. The longest match in tennis history was played in 2010. It lasted over 11 hours and was played over the course of three days.

The strategy behind playing games, of course, varies from player to player and from grass courts to clay courts to hard courts. To win a game, you want to focus on your opponent’s weaknesses, and the best tennis players in the world are quite good at doing this and taking advantage of it. If a player can expose a weakness early in a tennis match, that match will typically fly by a little bit quicker because the losing player is simply outmatched. The goal, in short, is to win and win quickly.

Tennis players alternate serving from game to game. Serving is seen as a major advantage in tennis, so it is imperative that players win a game in which they have service. When a player who is receiving the serve has the opportunity to win a game on the next point, it is known as a break point.

When a player who is not serving wins the set, it is known as breaking the other player. Breaking a game gives a player a huge advantage towards winning the set. Since most games are won by the player who serves, winning even a single game in a set can lead to a set victory. Breaking the opponent can also help shift the momentum of the match.

How many points does each side have in a tennis match if the score is a deuce?

If the score of a tennis match is “deuce,” this means each player has 40 points. Typically 40 points would mean a player can win the game on the next point. However this is not the case when both players are at 40. Instead, one of the two players must win each of the next two points in order to win the game.

What are the scores called in tennis?

Are the alleys in play in singles tennis?

In singles tennis, the alleys are not in play. If a player were to hit the ball into one of the alleys, their opponent would win the point. This fact is why the two lines running perpendicular to the net are commonly called “doubles alley.”

Pages Related to How Does Scoring Work In Tennis?