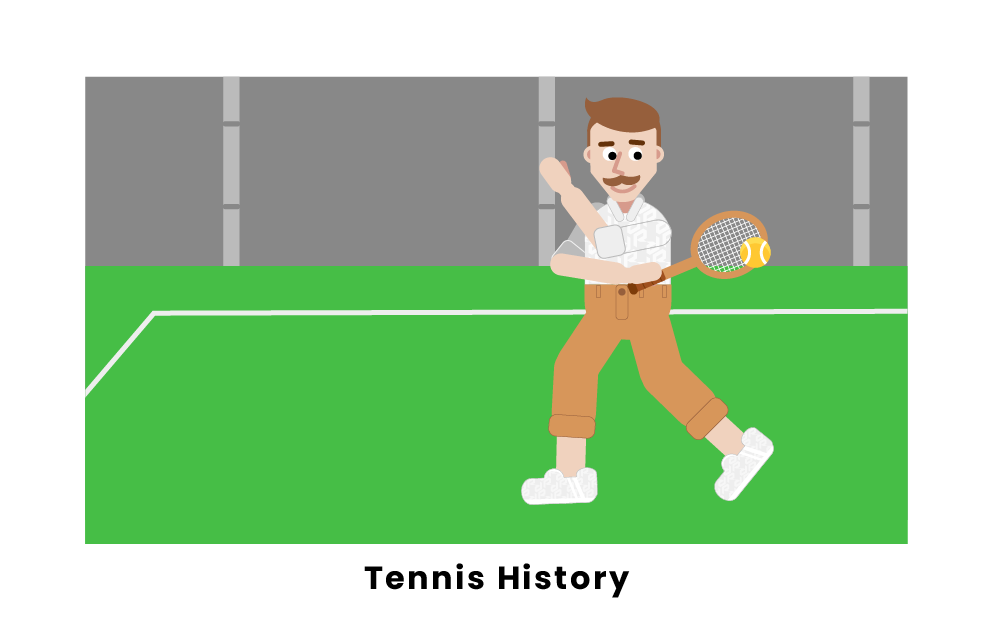 What is the history of tennis? What are its origins? Where did tennis come from? Who invented it? These questions are just a few of the many a tennis novice, or someone interested in the sport, might ask. Here, we will take a look at the answers to all of them as we examine the history of the sport of tennis.

Tennis is a sport that can be played either individually or as part of a two-person team. Each player is equipped with a specially designed tennis racket, with the object of the game being to successfully hit the ball over the net such that the opponent fails to return the ball after two bounces, or within the boundary of play. Games are played on a rectangular court with a net running across the center. There are a variety of different playing surfaces, including grass and clay.

Tennis originated in France during the 12th century, developing from a ball game where players used their hands, or a glove, to make contact with a ball and volley it over a net. Towards the beginning of the 16th century, rackets were invented and the sport expanded into surrounding areas such as England. It was not until this point in time that tennis gained its official name, which is derived from the Anglo-Norman word tenez, roughly meaning either “hold,” “receive,” or “take.”

The official establishment of tennis as a sport occurred around 1500. It was extremely popular throughout Europe, especially France, and the first tennis “tour” involving levels of professional athletes was created in France in 1571, when King Charles IX granted a constitution to the Corporation of Tennis Professionals. Rackets and balls specific to tennis were starting to be manufactured at this time, and approximately 1,800 indoor courts were created in England to accommodate a growing desire to play the sport.

Tennis’ popularity continued to grow throughout the 1600-1800s, and tennis in fact played a role in a number of historical events. One of these events was the beginning of the French Revolution. Tennis became a prominent part of the early revolution when a number of French politicians signed a pledge in June of 1789 to avoid assembling until the monarchy was eradicated and the country had created a democratic constitution. The pledge was signed on an indoor tennis court, and thus became known as the “Tennis Court Oath.”

Outdoor tennis was not established until 1877, a few years after Walter Wingfield, the inventor of modern tennis, introduced the gameplay features we associate with today’s tennis. It was also around this time that the previously-utilized hourglass-shaped courts gave way to the rectangular courts viewers and players are accustomed to today.

While the early origins of tennis lie in the 1100-1500s, the modern version of outdoor tennis that exists today did not come about until the second half of the 19th century. The invention of modern tennis is generally credited to Walter Wingfield of London, who introduced a style of play involving rubber balls and a manicured grass court in 1873. Wingfield’s invention was a big moment in the history of tennis, as it proved that the sport could be played outdoors and validated the idea of striking the ball with rackets.

Tennis became extremely popular throughout the 1870s, as croquet clubs in England started to adopt the sport when it was realized that preexisting grass croquet courts were perfectly suitable for tennis matches. The year also marked the first recorded tennis tournament, with the All England Croquet Club hosting the inaugural Wimbledon Championship. To this day, Wimbledon is played each year, and is widely considered to be one of the most important and prestigious competitive events for professional tennis players. Moreover, tennis is currently the fourth-most popular sport around the world.

Listed below are the countries in which tennis is most popular. Rankings are based on overall popularity of the sport and the number of events held in each nation: