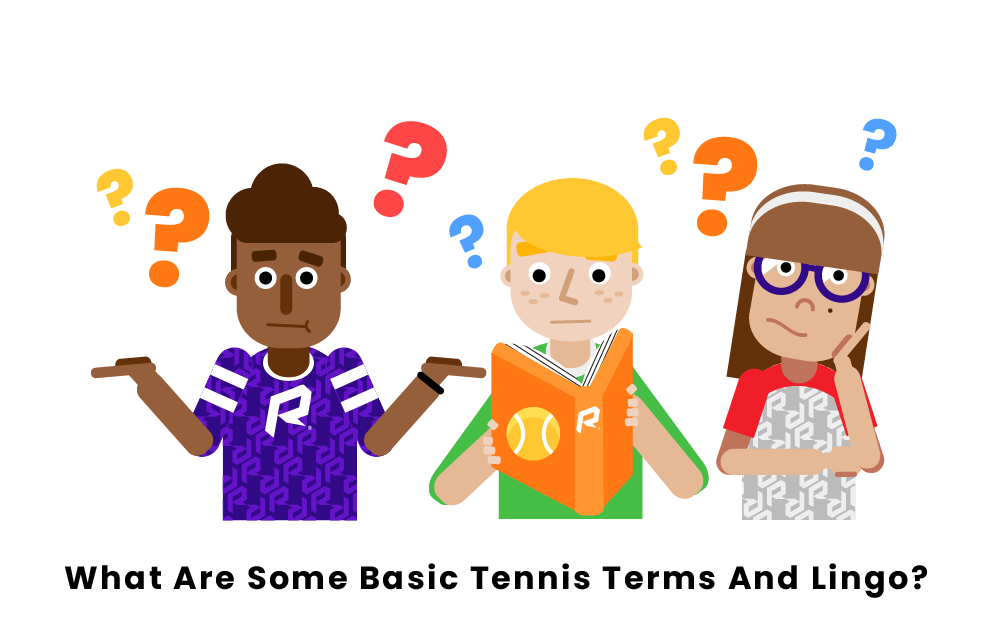 Ace: When a ball is served so well by a player that the other player is not even able to touch the ball to be able to return it.

Advantage (AD): It is the point scored after Deuce (40-40), where if the player with the advantage wins the next point, they will win the game

Backcourt: The area surrounding the baseline

Backhand: A swing where a player brings the racquet across their body to make contact with the ball

Baseline: The back line of the court that runs parallel to the net and perpendicular to the perimeter sides of the court

Deuce: 40-40 (All tied up and the point before advantage): Win by 2 points to win the game, each player has won 3 points already

Drop Shot: A softly hit ball that lofts in the air with a lot of backspin before dropping

Forehand: Hitting the ball with your dominant hand holding the racquet on that same side of your body

Let: Point played over again because of an interference

Lob: A ball hit that is well above the head of the opponent forcing them to run back on their side of the court

Match: Overall contest decided by a best of 3 or a best of 5 sets

Rally: Returning the ball back and forth while it is in play

Serve: When one player puts the ball into play to start the point (Alternates every game which player serves)

Set: Whichever player has won 6 games (by 2 games or more over the opponent), if not, sudden death occurs

Slice: Hitting the ball with your racquet in a high to low motion generating backspin

Tiebreak: Way to decide who wins a set when it is tied at 6 games each

Topspin: Hitting the ball with your racquet in a low to high motion in a forward motion

Volley: Hitting the ball before it hits the ground