Tennis courts surfaces are very diverse in type and makeup. Tennis courts can vary in terms of the material that makes up it’s surface, which can have a range of effects on the way the game is played. This piece discusses different types of tennis courts, their benefits and downsides, top brands, as well as the main court markings.

Tennis courts are the foundation of the sport itself, providing a practical playing surface for the players. The courts are marked by various lines that create playing boundaries for both singles and doubles. These markings also help the court’s dimensions, which consist of 78 feet in length, 27 feet in width for singles, and 36 feet in width for doubles. The court is divided in the middle by a net that stands 42 inches tall on the sides and gradually decreases to 36 inches in the middle. The surface of the courts are typically made of grass, clay, or asphalt on “hard courts”, but it is also possible to find carpet courts. This material composition of the surface of these courts can create a range of effects on the play of the sport, including bounce height, speed of the ball, and the upkeep needed to maintain court conditions. Without court markings, the net, and the surface of the court itself, it is impossible to enjoy this globally popular sport.

When looking for tennis courts, you'll want to consider the following:

What are you looking for in a tennis court?

There are many different types of tennis court surfaces, including clay, grass, carpet, and asphalt, that can affect a range of factors from bounce to court maintenance. 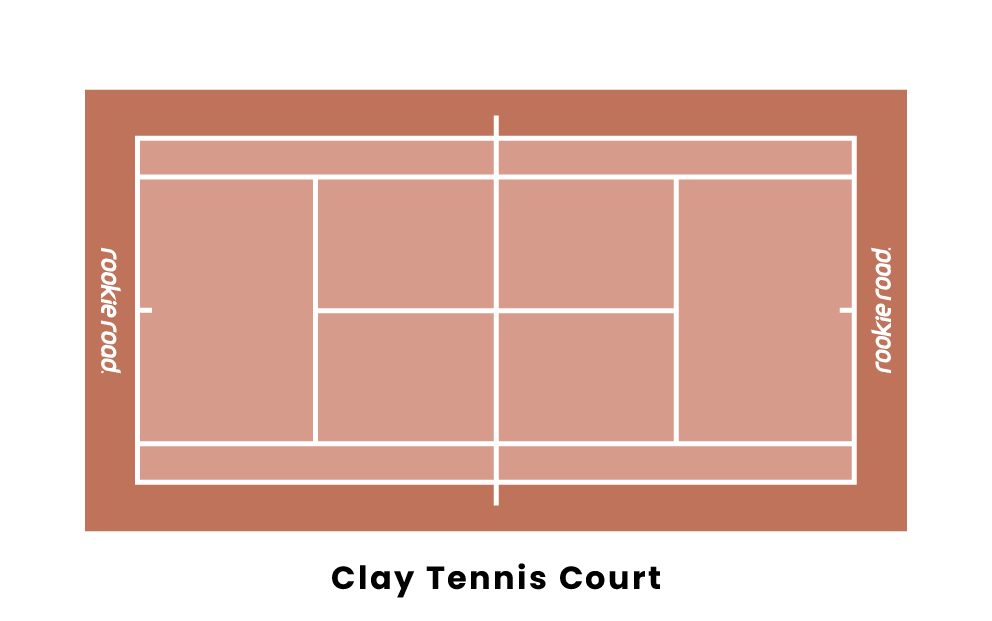 Clay courts are generally more durable and are considered to be a premium type of court. The properties of clay allow players to be more agile on the court, limiting stress on joints and even allowing for the ability to slide to reach balls. Clay typically results in slow bounces, which allows quick players more time to return shots. 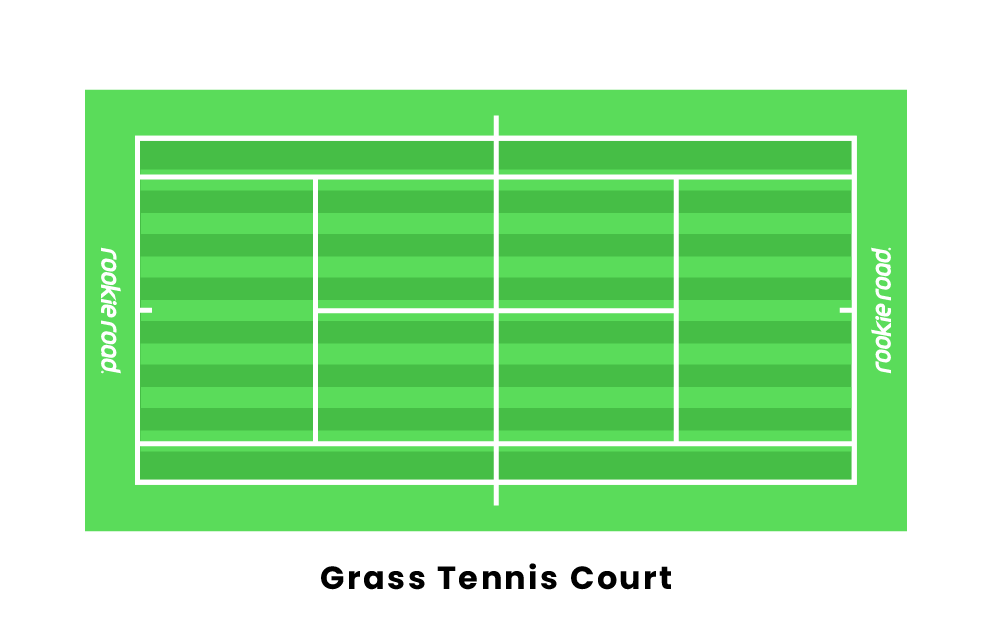 Grass courts are the original type of tennis courts; however, there are not many remaining due to the difficulty of maintaining these courts. Yet, despite the limited number of courts, many professional tournaments still use grass courts, including Wimbledon. Bounces on grass tend to be quicker and lower to the ground, giving the advantage to harder hitting players. Bounces are generally very consistent on this surface. 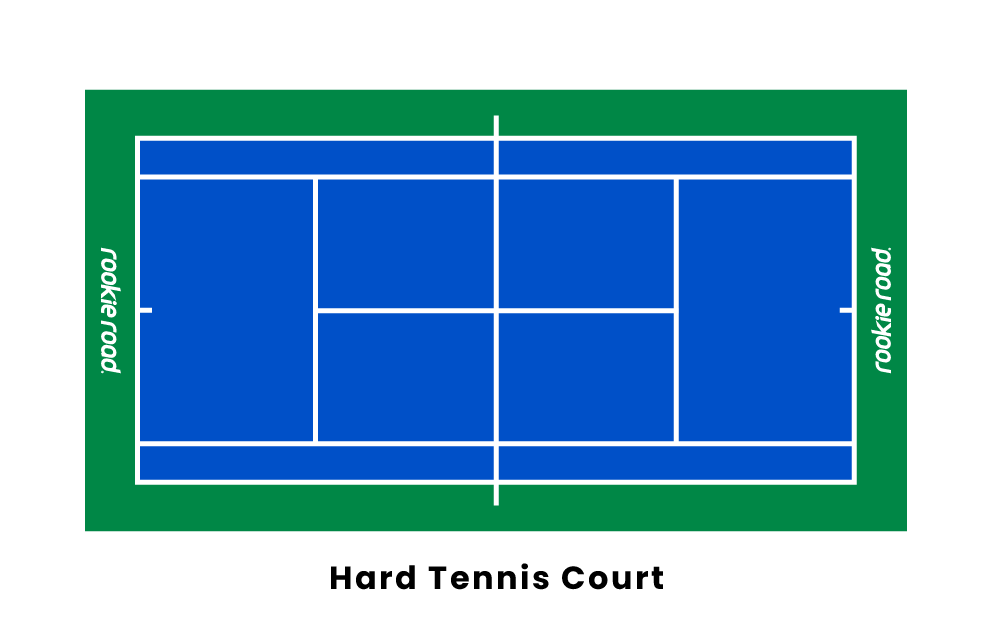 Hard courts are the most common type of tennis court today and are used in the most professional tournaments worldwide. Hard courts are typically made from an asphalt or concrete base, covered with an acrylic top, and mixed with other materials to produce the final product. These courts usually feature fast bounces, but bounce height can vary depending on the type of hard court, so players should be familiar with how each hard court plays to receive the best results. 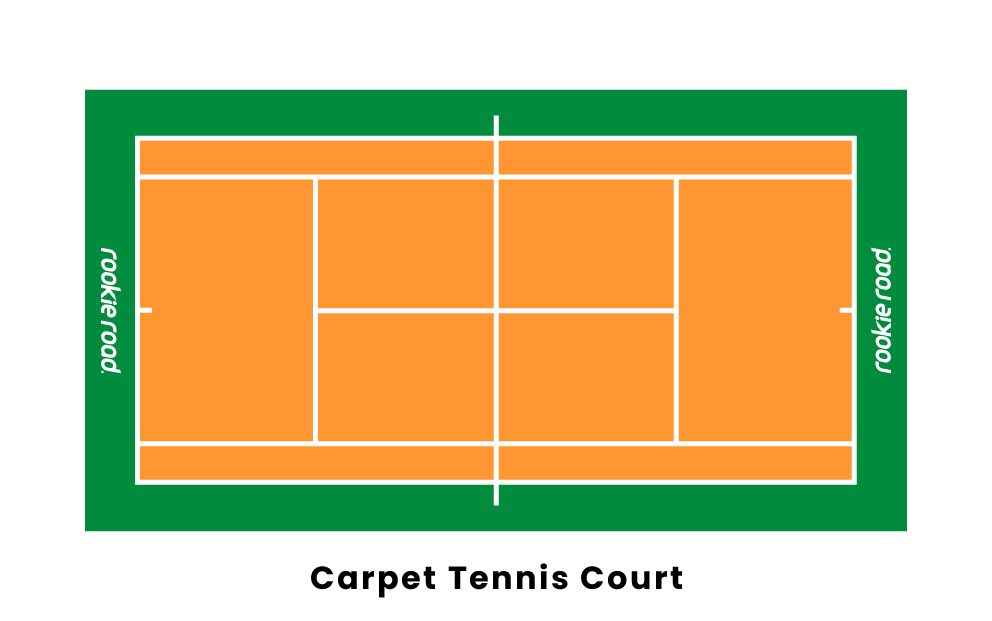 Carpet courts are typically used in indoor settings, making them a great court option for tennis players looking to play during the winter. However, carpet courts are not very popular in the professional world as they are not used in any major tournaments. Carpet courts actually play the fastest out of all courts, with quicker and lower bounces than grass and hard courts.

The tennis court features a multitude of court markings, each serving various purposes ranging from out-of-bounds markings to starting positions.

As mentioned, hard courts play differently depending on the individual hard court itself. This is because many different courts feature different brands of hard court material.

DecoTurf uses a five-layer system to create its version of hard court, beginning with an asphalt or concrete layer, followed by layers of acrylic, sand, rubber, and paint. DecoTurf prides itself on its ability to be low-maintenance, as well as its ability to withstand most weather conditions. DecoTurf is used in many tournaments, including the Olympics and the US Open until 2020.

GreenSet is another popular type of hard court that uses a similar system but features its acrylic layer on top of an asphalt or concrete base more so than other types of hard court. GreenSet was first used in 1970, primarily in indoor settings, and is now used by over 600 tournaments worldwide, including the Australian Open and the Davis Cup tournament.

Laykold is one of the most popular types of hard court and the tennis world has seen a recent massive transition to this type of hard court, including the US Open officially changing its surface from DecoTurf to Laykold in 2020. Laykold is known for being economical and environmentally friendly, as it is locally made using locally sourced ingredients to best fit the court for the local climate.

What type of tennis court is used at Wimbledon?

The oldest grand slam of the four major tournaments, Wimbledon, has used grass tennis courts throughout its rich history and still does to this date. Specifically, Wimbledon uses perennial ryegrass cut short to just eight millimeters to produce its tennis courts. As mentioned, grass courts feature consistent bounces that are generally low and fast. This is why Roger Federer is considered to be the king of Wimbledon and grass courts by many, as these bounces are a perfect fit for his playing style.

What are the dimensions of a tennis court?

A tennis court is typically 78 feet in length with a net in the middle, dissecting the court into two 39 feet long halves. There are two sets of sidelines on a tennis court, one for singles and one for doubles, with the purpose of making the court smaller in width for singles play. The result is 27 feet of width for singles and 36 feet of width for doubles. The net stands 42 inches tall on its ends and gradually decreases to 36 inches in the middle.

What are the most common tennis court surfaces?

Today’s most commonly found tennis courts are hard courts, as this surface type is used throughout the world for many tennis tournaments and is also used recreationally in parks and rec centers. In the past, grass used to be the most popular type of tennis court surface; however, with the evolution of hard courts and the amount of maintenance needed for grass courts, this type of court has quickly fallen to the rarest type of surface.

Pages Related to About Tennis Courts