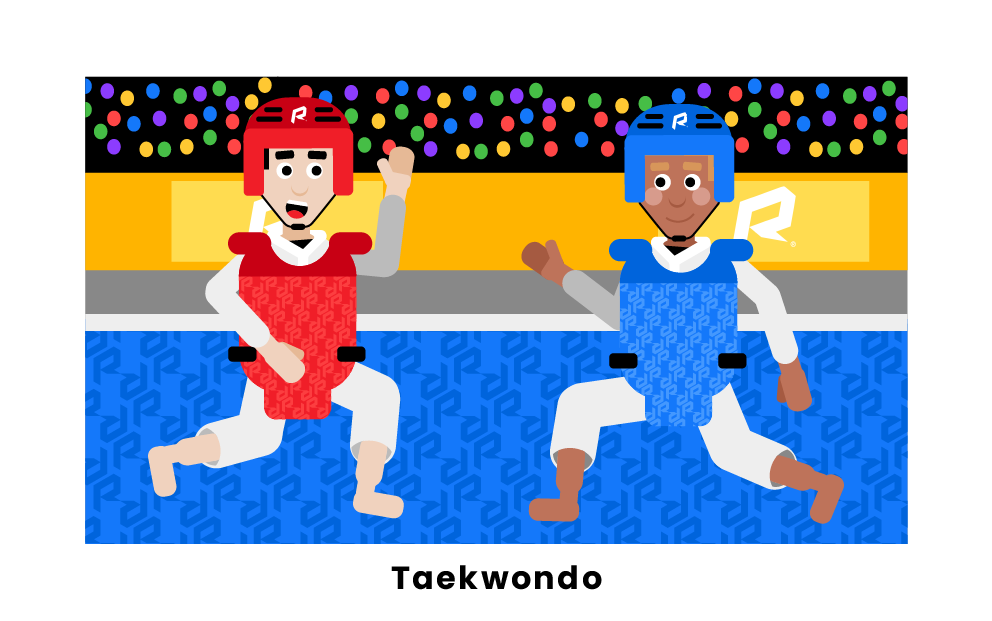 The name Taekwondo comes from the Korean words "Tae" meaning foot, "Kwon" meaning fist, and "Do," meaning way of. It is a very scientific and systematic form of martial arts that teaches far more than physical fighting skills. This discipline of fighting shows ways of enhancing the spirit and life through training the body and the mind. 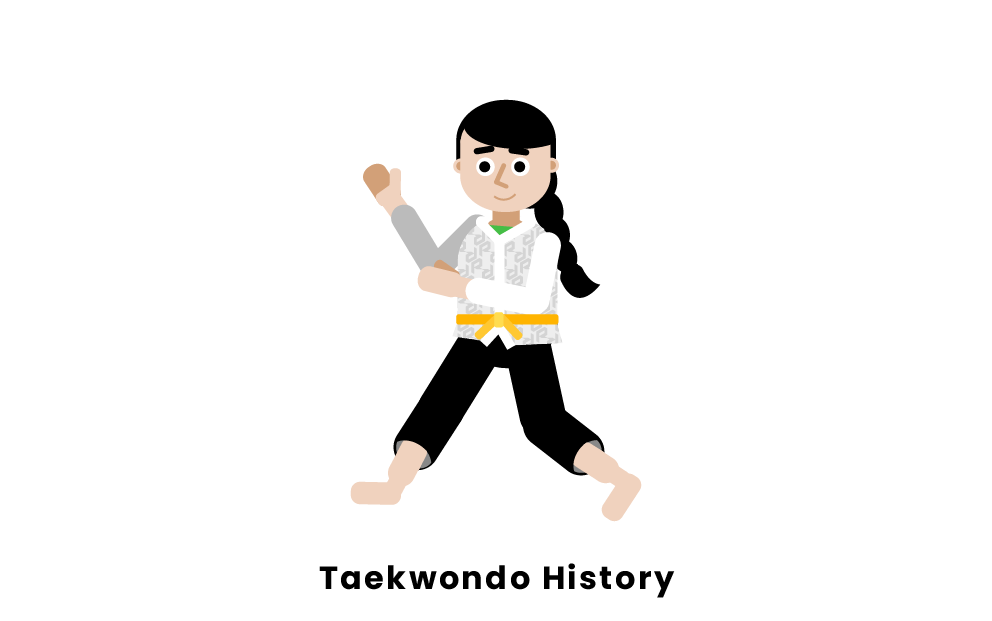 Taekwondo is one of the oldest martial arts, with its history dating back over 2,000 years. The earliest clues of the sport's existence is a mural painted on a tomb that was built in Korea between 37 BC and 66 AD. As the country developed so did taekwondo. There are examples of training in virtually all the records of the different kingdoms that existed in the country. Taekwondo in the United States became popular during the 1950s when a handful of instructors travelled to America to spread the sport. Throughout the next couple decades, it became an international sport. 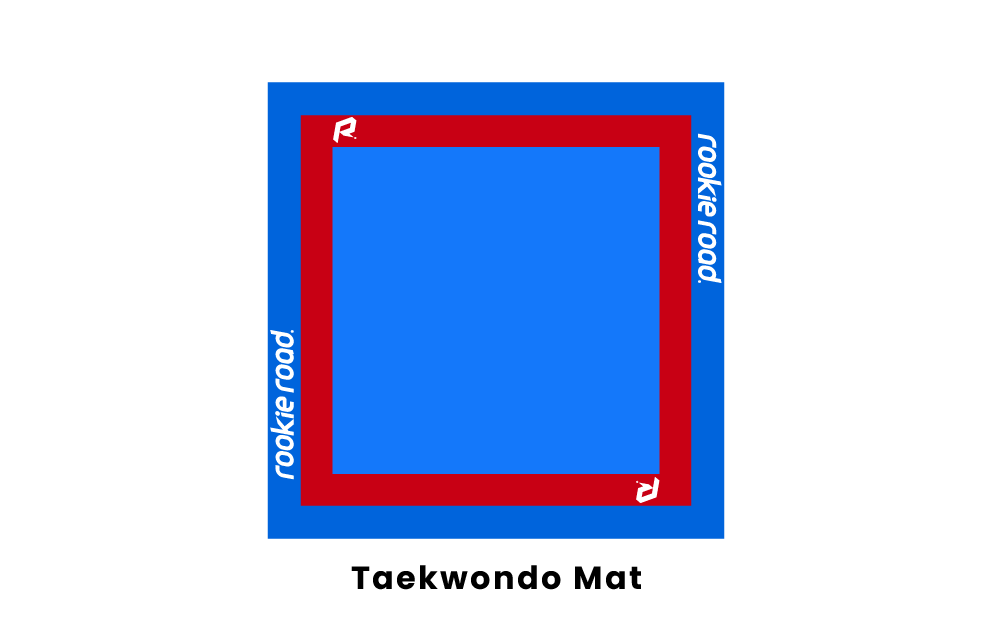 Taekwondo takes place on a mat surface. Taekwondo facilities benefit from thinner mats, as they should be around 1 inch in thickness. A thin mat will be more firm, which provides stability for stand-up martial arts training. This stability will provide them with the ability to perform head high kicks, spins, jumps, and other techniques. 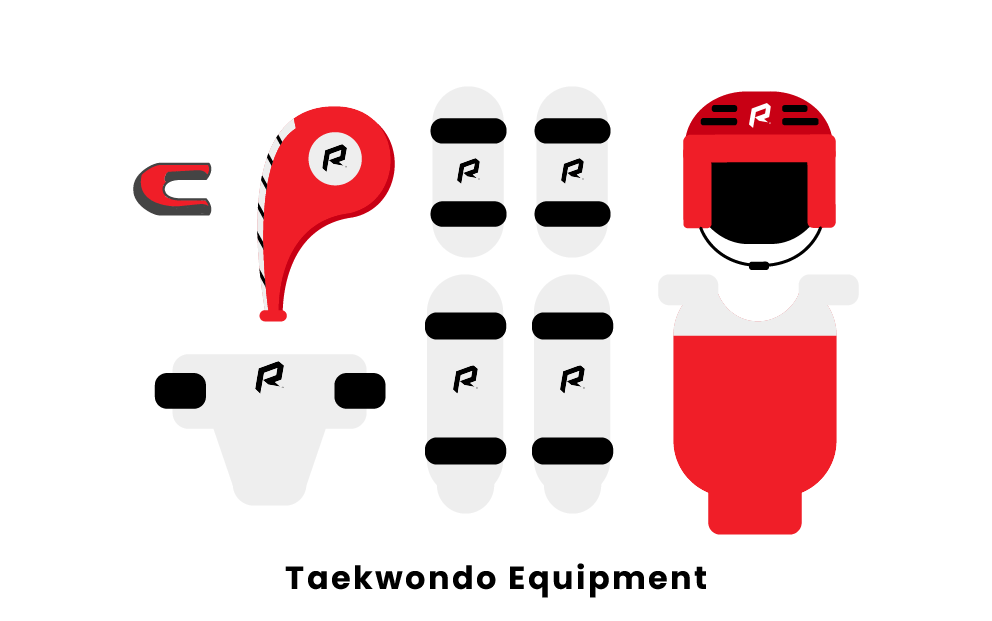 In competition, fighters wear a white uniform that is called a gi. The colored belts around these uniforms signifies the level of the athlete. The belt starts at white for beginners, and black belts are the most experienced practitioners. Along with these uniforms, there are several pieces of protective equipment that a fighter will wear. This includes a head guard and mouth guard to protect the teeth and the head from concussions. Chest protectors are also necessary, along with shin guards and forearm guards.

A taekwondo match has three two minute rounds on a competition area that is typically an 8 square meter mat. Each fighter will attempt to knockout their opponent or score points by landing punches or kicks on the opponent's torso or head. The winner is decided by which fighter has the most points at the end of a match. If both fighters have the same points at the end of a match, then an extra round takes place called the golden point round, where the first fighter to score a point will be the winner.

There are some rules and regulations in the sport of taekwondo to make sure that everything is safe. For example, while kicking and bunching are both allowed, you may only kick at the head. Punching must only be on the body. Also, below the waist is a target that is prohibited. Fighters will lose points by committing penalties. Penalties include punching to the face, attacking with the knee, stepping out of the ring, pushing your opponent, or creating an injury. 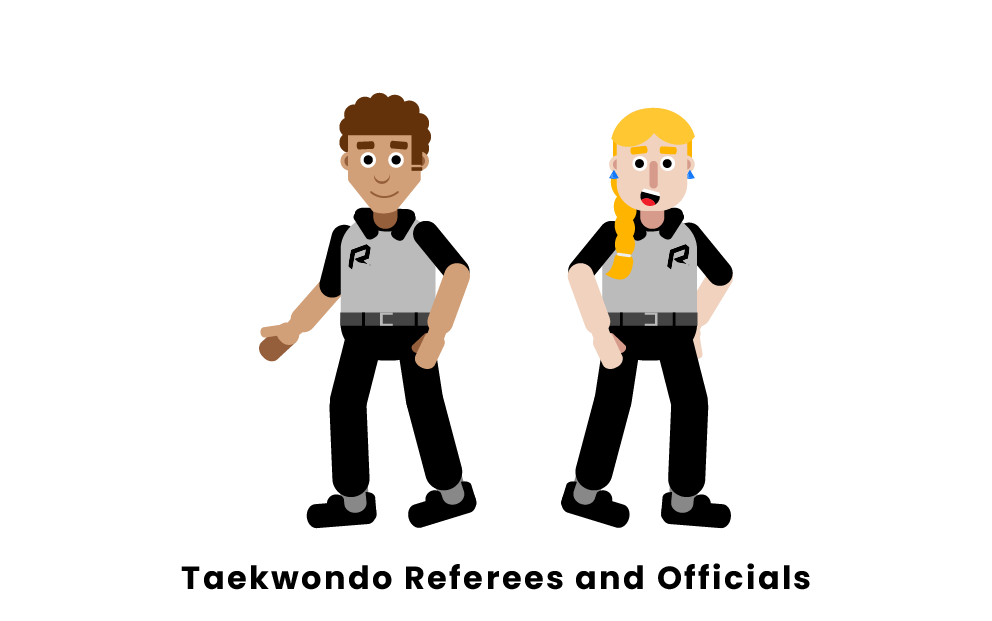 A refere is there to make sure that all rules are being followed and is the person of authority in a taekwondo match. The referee will be making decisions that will enforce the rules of the sport, along with sportsmanship decisions such as ejection. The referee is also responsible for stopping fights to prevent further damage happening if things get out of hand. They will also declare competition commands, winners, losers, deduction of points, and more. It is almost impossible to have a clean and safe match without an experienced referee taking charge. 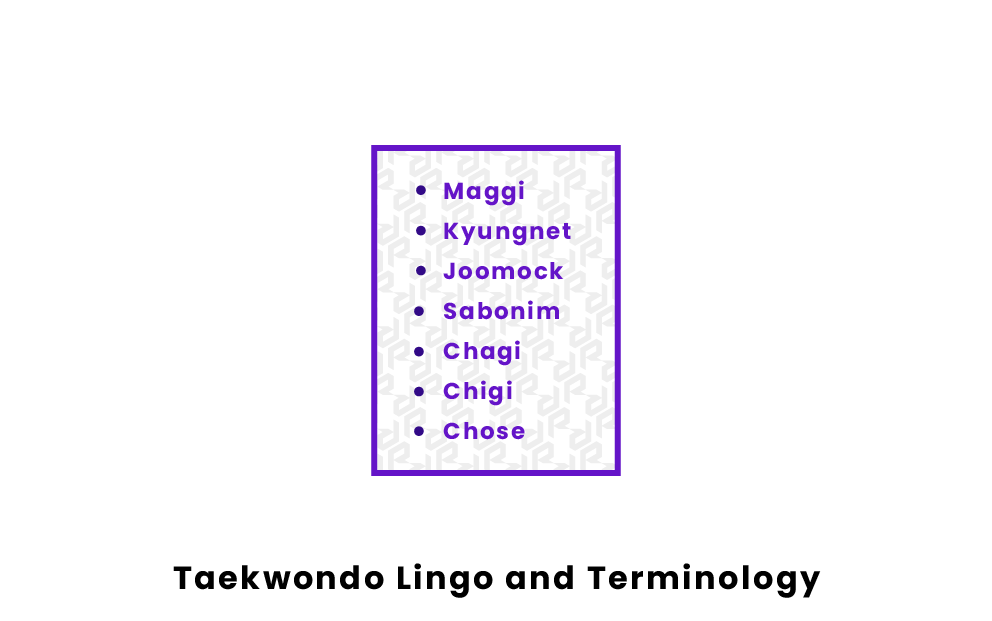 The lingo in taekwondo is pretty much the same as the Korean language. Many of the orders and commands that one might hear are really just Korean words. There are a lot of these types of terms that a fighter may need to keep up with, especially if they are at a high level. Below are just a few examples of commands that may be heard in Taekwondo: 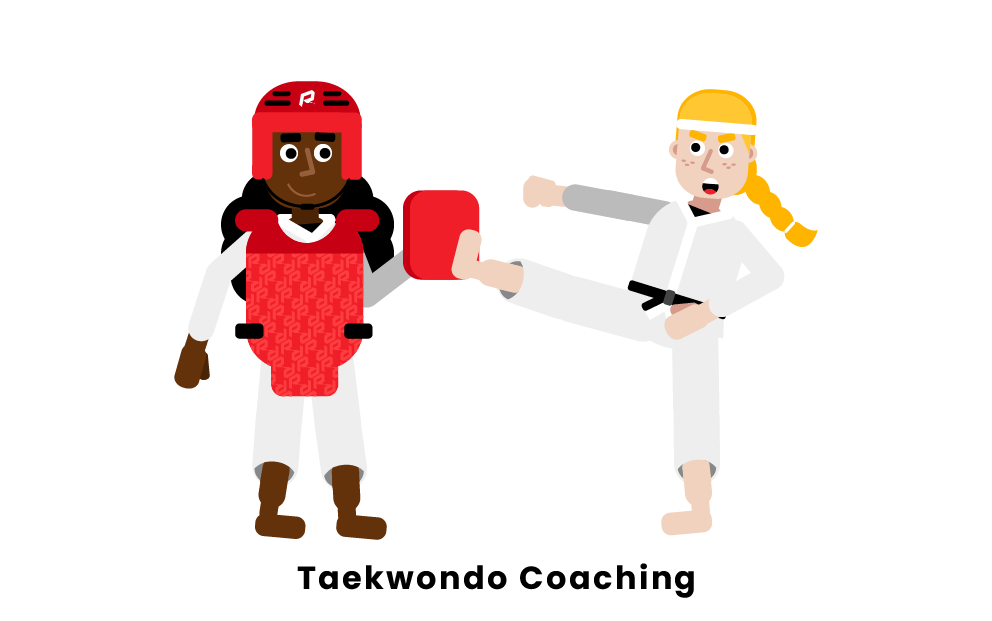 Coaching is a very important aspect when it comes to a fighter's development in the sport of taekwondo. An instructor in taekwondo is called a "sabom," which comes from Korean terminology. Most taekwondo coaches hold at least a black belt in the sport, and others also completed a teacher training certification class. The coach will play a vital role in training, and will also be in the fighter's corner during every match, making sure he is performing to the best of his ability.

In taekwondo, there are many skills and techniques that people should be aware of. A taekwondo fighter must be agile, vigilant, and strong. These fighters must know how to kick, punch, block, and dodge in many different ways. The world Taekwondo headquarters in Korea says that there are just 14 moves that are the foundation of Taekwondo. These 14 moves include the variations of blocks, kicks, bunches, and others strikes. Many of these are quite simple to learn, and will be easy to practice as one can eventually master each move.

Taekwondo is a very strategic sport and fighters will always look to exploit the weaknesses of their opponents. There are many different types of stances in taekwondo, and one strategy is when a fighter will change stances in order to pattern attacks accordingly. Another strategy fighters will use is to very carefully study an opponent. This will allow the fighter to learn his opponents favorite types of attacks, and he can then work on how to use this to his advantage to plan for appropriate counter attacks.

Whether at home or at the gym, there are plenty of drills that you can do to strengthen your skills in taekwondo. Sparring is a good way to develop your skills as you progress to become a better fighter. Another thing you do is work on strengthening your muscles. Some of the most important muscles for fighters are the legs and the core. Plank exercise for the core, and squats for the legs are two great exercises that can start you out on strengthening these areas. 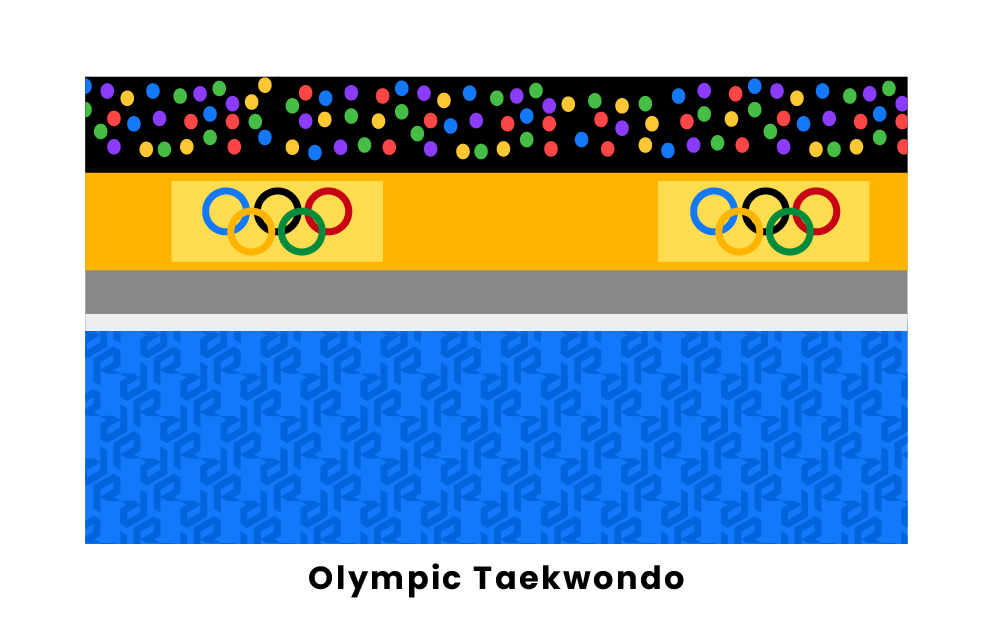 Taekwondo debuted as a demonstration sport during the 1988 Seoul games. It then became an official medal sport at the 2000 games in Sydney, Australia. South Korea has dominated Olympic Taekwondo, winning 12 gold medals with 19 total medals. Behind South Korea is China with 10 total medals and 7 gold medals. The United States is the third most successful country, as they have 9 total medals, two of them being gold.

There are different brands that create top notch taekwondo equipment. When purchasing equipment, it is important to know about the brand you are buying from to make sure that they are well known and respected. You want to purchase your gear with confidence, and being familiar with different brands will help you in doing that.

Taekwonod is a sport in which organizations for young kids can be found all over the world. These organizations have great cooperative instructors that will help teach kids the basic skills of the sport and valuable life skills. One thing that is great about these youth organizations is that instructors will teach them the tenets of taekwondo, which are: courtesy, integrity, perseverance, self control, and indomitable spirit. These 5 tenets are recited before every class to remind the students the important virtues that come with taekwondo.

Since becoming an Olympic sport in 1992, Taekwondo has become one of the most popular combat sports and has generated some very popular athletes. Here are some of the most successful taekwondo fighters to ever step onto the mat.

The largest Taekwondo organization in the world is the World Taekwondo Federation (WT). The WT is the International Federation governing sport of taekwondo. This organization hopes to grow and promote taekwondo throughout the world from the beginning level all the way to elite.

Taekwondo is an individual sport, so it is not very often that you will find teams in the sport, as it is fairly often that every fighter is there for him or herself. However, it is often that many of these athletes have the same coaches or belong to the same gym, and therefore they might train together and still support each other despite Taekwondo being an individual sport. Along with that, the Olympic teams all train together as they are a part of the same country, and they will have the same group of coaches.

World Taekwondo organizes elite tournaments for people to watch all throughout the year. These are held all over the world, and top level fighters will travel to compete in these events. Here are some popular tournaments in taekwondo: 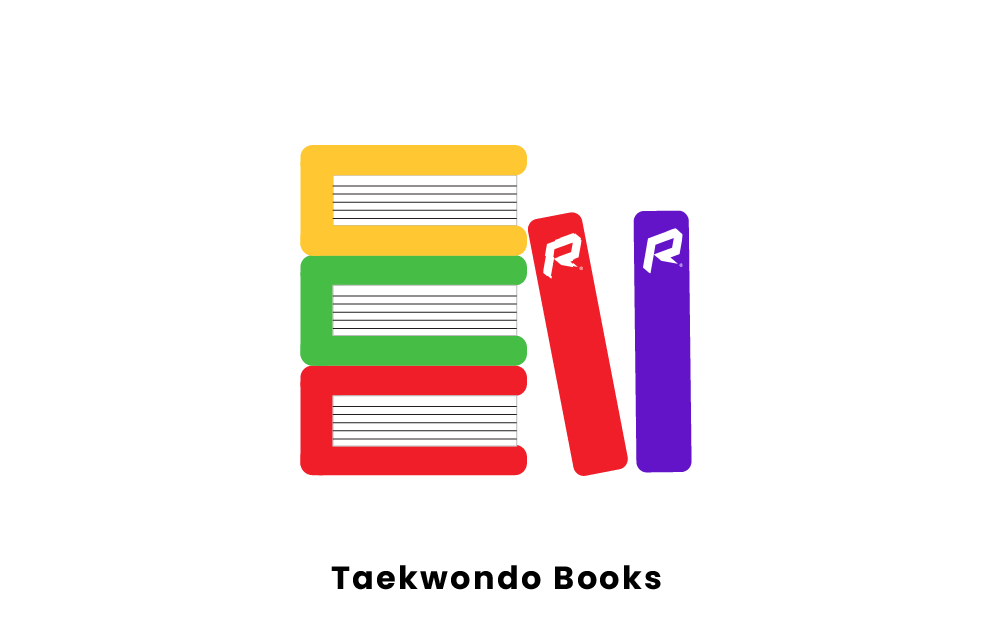 There are numerous taekwondo books that will cover the techniques, forms and patterns, and philosophy of the sport. These books will help you tremendously in learning the ways of the sport, and will also be very enjoyable to read. 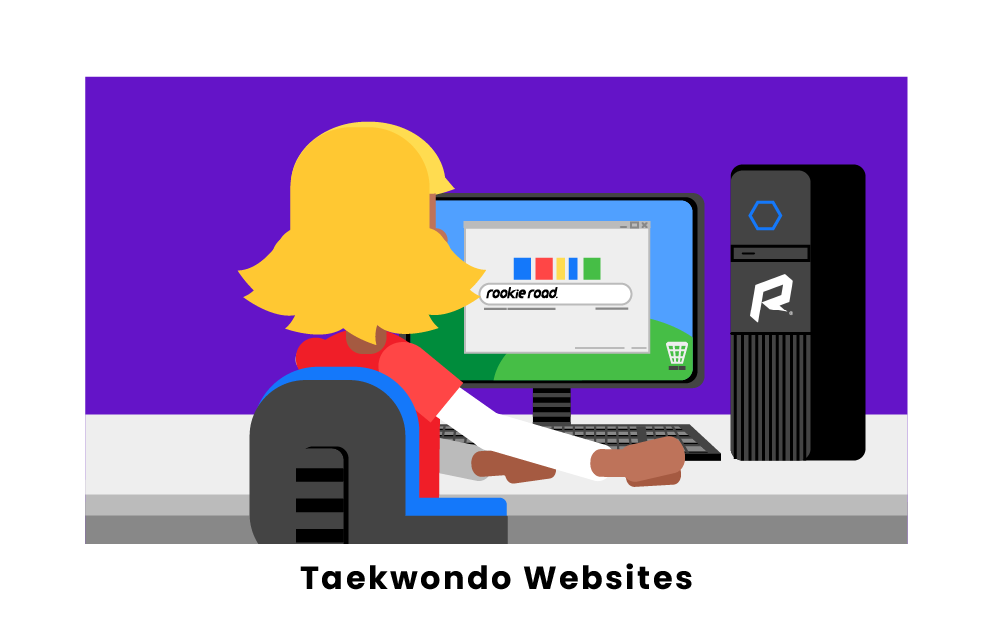 Taekwondo is a very dynamic sport with active movements that include a large variety of foot skills. It is a martial art that has origins in Korea and has grown in popularity all throughout the world.

Where is Taekwondo most popular?

Taekwondo originated in Korea, and to this day that is where it is the most popular. At the professional level, fighters from South Korea have dominated the competitive field and have found the most success by far.

Is Taekwondo an olympic sport?

Taekwondo was first a demonstration sport in the Olympics in 1988, and became an official medal sport in 2000 at the Sydney games.

Pages Related to What is Taekwondo?