How Does Scoring Work In Taekwondo? 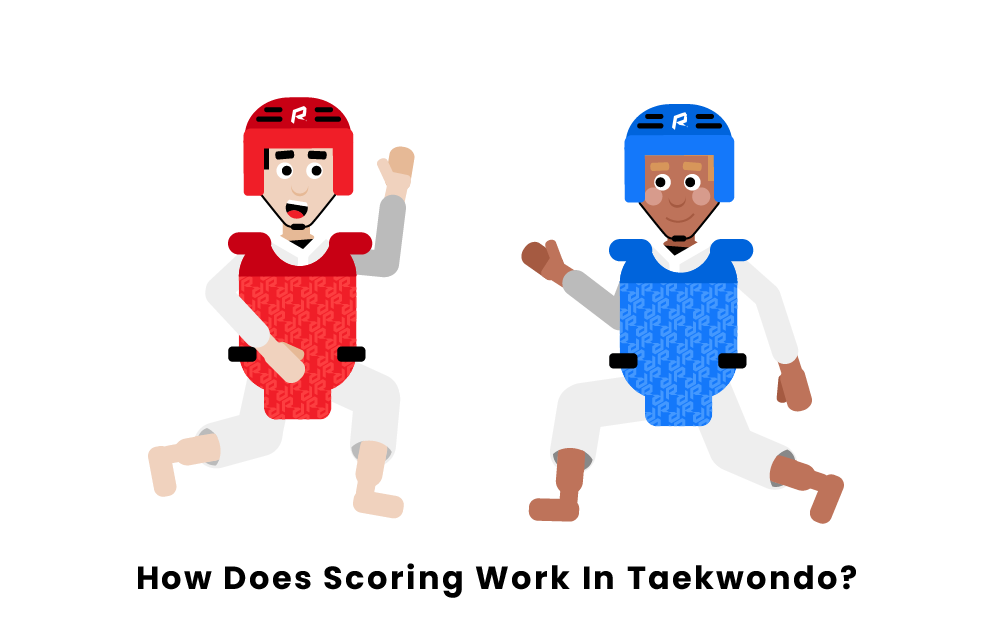 Taekwondo is a combat sport that requires you to hit your opponent to score and win. During a competition, athletes wear protective gear that have sensors which measure the force of the kick or punch that is being delivered. In order to score, athletes must deliver their strikes with a good amount of force. A variety of techniques can be used in order for you to score, but the way scoring is judged is extremely simple.

Punches to the body earn you 1 point. Punches must hit the opponents protective gear in order to score, and must also be delivered with force.

Body kicks, or kicks to the trunk, are awarded with 2 points. These are straight or hooking kicks to the body with any spins.

Spinning body kicks, or spinning kicks to the trunk, are given a higher score of 3 points. This is when you turn your body and deliver a blow to the opponents trunk either with the top or bottom of your foot.

Kicks to the head are also given 3 points. Depending on the technique one uses, they can either hit their opponent's head protector with the bottom or top of their foot.

Spinning head kicks are the highest scored, and most difficult technique in taekwondo. They are extremely difficult to land, so they are awarded with 4 points.

This is basically the mercy rule of taekwondo. During a competition, if you or your opponent gain a 20-point lead, the fight is over and the person with the commanding lead is considered the winner. In taekwondo, this gap is considered too dominant for the other fighter to come back and win.

What are the basic rules of Taekwondo?

Although taekwondo is a combat sport, it still has rules to protect the fighters and make matches fair. Here are some basic rules of taekwondo.

Before the fight begins, opponents must bow to each other and the referee. This is a practice of sportsmanship and respect for the competition. The fight can only begin once the referee says so, then athletes can begin to spar.

In order to score, you must either land body shots or head shots. When spins are added to these strikes, they are awarded more points. Strikes must also be delivered with force so the sensors in the protective equipment can count it as a point. You are only allowed to hit the colored areas of your opponents protective equipment and cannot hit your opponent in the face.

Fighters can receive penalties for falling, stepping outside the fighting arena and even for being inactive for more than seconds. Penalties include the following:

If any of these penalties are committed your opponent is awarded one point. If the score is tied after three rounds, a one-minute fourth round will be added. The first to score one point is the winner of the competition.

What is the objective of taekwondo?

The objective of taekwondo is to outscore your opponent by using kicks and punches and to avoid getting hit as much as possible. The match ends with either a winner by points, or if you knock your opponent out. It is a combat sport, so it is entirely possible for athletes to get knocked out cold, or to get knocked down hard to the point where they are conscious, but not willing to get up and fight again.

What are the basic techniques in Taekwondo?

How many rounds are there in Taekwondo?

Matches are relatively short, consisting of three two-minute rounds. However, if the score is tied by the end of the match, the fighters go into a golden point round. This is a one-minute round, and the first fighter to score, takes home the victory.

Pages Related to How Does Scoring Work In Taekwondo?