Where Is Table Tennis Most Popular? 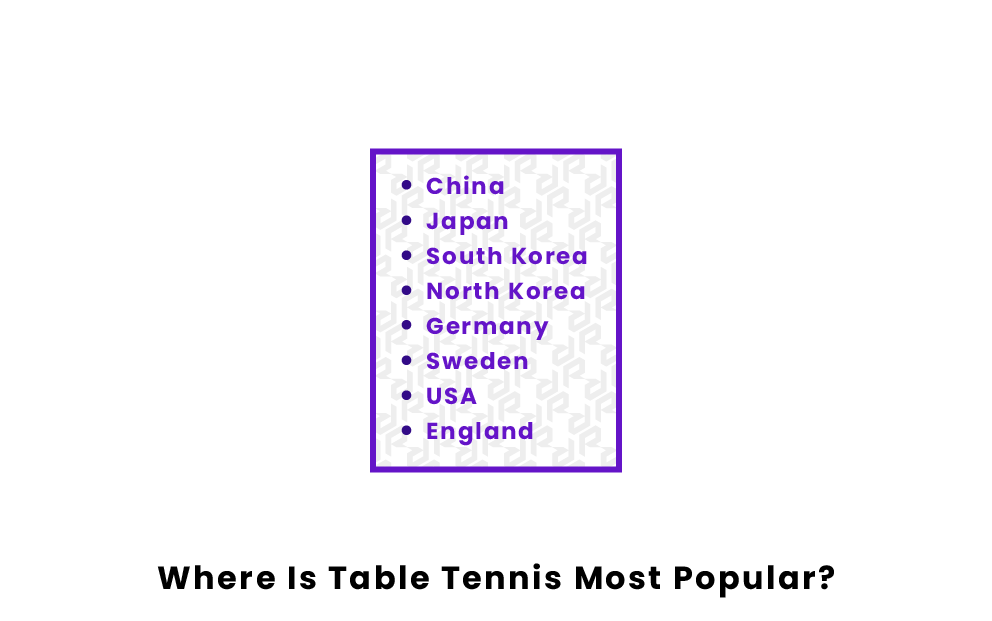 While some sports remain fairly local in their popularity, there are those sports like table tennis whose popularity seems boundless as it slowly spreads across the globe. Listed below are the countries across the world in which table tennis is most popular, as well as how and when this popularity reached its peak in each location.

China is easily the country in which table tennis is most popular. For the past fifty years, they have become renowned for dominating at world championship competitions, even winning every single gold medal at the 2008 and 2012 Olympics. Though China’s teams are known for being a powerhouse in such tournaments, they are also well known for producing the most successful individual players in the sport’s history. Chinese player Deng Yaping has even won the most professional titles of any table tennis player ever. In addition to their international competitive success, China’s cultural obsession with table tennis has also been globally of note. In fact, one of the first attempts at diplomatic relations between the United States and China was centered on table tennis. In 1972, table tennis players from the United States and China were exchanged as a symbol of goodwill between the two countries, an event that was so successful it is now commonly referred to as the first step of Ping Pong Diplomacy.

Table tennis has also become increasingly popular in Japan, especially as a means of international competition. The popular anecdotal explanation of the game’s origins in Japan is that visiting upper class British tennis players would play table tennis inside when it rained. Later on, in the 19th century, noted educator Tsuboi Gendo was then tasked with bringing the first official table tennis equipment back from England. Though the sport did not experience a sudden rise in popularity, its social coin arose in Japan once the sport became more of an international phenomenon. In fact, success in table tennis, especially against China, became such a desirable symbolic victory that increased efforts were made to place at the Olympic level. In 2016, Japan at last won a silver medal and two bronze medals at the 2016 Olympic Games. In 2020, Japanese head coach Baba Mika even pronounced explicit plans to dethrone China in their Olympic dominance.

Korea, as two separate countries but also as a unified whole, has a dynamic and powerful relationship to table tennis. In 1988, table tennis was first played as an Olympic sport at the games in Seoul. While the gold medal for the best female table tennis player went to Chinese player Chen Jing, the first gold medal for a male table tennis player went to Korean player Yoo Nam-kyu. In the over thirty years since, table tennis has become so internationally popular that it is now the most practiced sport in Asia. Though Korea has been divided into North and South Korea since the 1950-1953 Korean War, the head of the ITTF (International Table Tennis Federation) in the early 90s saw the chance for table tennis to unify. The two teams representing North Korea and South Korea unified to compete in the 1991 World Championships, and even won against China in the final match. Despite rising political tensions, both Korean teams again used table tennis as a chance to represent a future unity of both countries again twenty years later and competed as a unified team for the 2018 World Championships.

One of the more recent converts to table tennis popularity fame is Germany. In the 1980s, despite the lack of a national movement, the first major German table tennis players hit the international stage. A team made up of Jörg Rosskopf and Steffen Fetzner won the World Championship in 1989. Thanks to this achievement, the popularity of the sport rose immensely throughout the country. Three years later, in 1992, Rosskopf became the first German to participate at the Olympics (in the men’s singles division). That same year, Rosskopf and Fetzner not only played in the men’s doubles division but won silver medals. Thanks to their efforts, table tennis in Germany continued to rise and, a decade later, Timo Boll became the first German player to be the number one ranked player in the world (by the ITTF). The next year, the renowned German professional sports club Borussia Dortmund established the first national department specifically for table tennis.

Table tennis has been an extremely popular sport in Sweden ever since the first Swedish table tennis championship was played in 1925. In the near century since, the sport has spread to be part of community centers, a variety of regional competitions, and even Swedish office culture. Also, in 1944, the company STIGA was founded and began what would become a global legacy of producing table tennis equipment. In the 1980s, Sweden experienced a surge in international competitive success, especially thanks to men’s singles master Jan-Ove Waldner. By the late 90s, Waldner was even known in the West by the nickname “the Mozart of table tennis.” Though Waldner’s legacy ultimately came to an end, Sweden remains a cultural hotspot for table tennis and a source of some of the sport’s greatest players.

Pages Related to Where Is Table Tennis Most Popular?