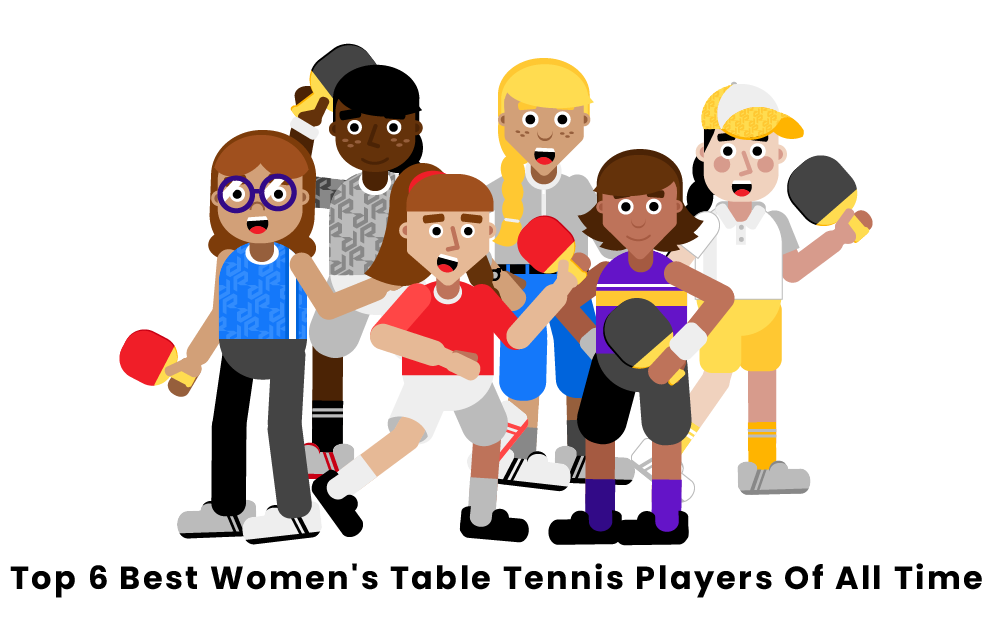 In the long history of table tennis, there have been many great female players. Some have even gone on to win multiple ITTF World Championships, World Cups, and gold medals at the Olympics. Listed below are the six best women’s table tennis players of all time.

Who are the best women's table tennis players of all time?

Ding Ning is arguably the greatest women’s table tennis player of all time. Ning was born in Anda, China, on June 20, 1990. At a young age, she won the 2005 World Junior Championships, and her career escalated from there. As a senior athlete, Ding Ning was referred to as the “Queen of Hearts” and was ranked number one in 2009. She then won the ITTF World Championships for the first time in 2011. She would go on to win gold in both the 2012 (London) and 2016 (Rio de Janeiro) Olympic Games as a part of team China. In 2016, Ning won gold in the singles competition as well. From 2011-2018, she also won a total of 10 World Championship titles (three singles, four team, and one doubles). With an astounding track record, Ding Ning retired in 2019 as the greatest female athlete in her sport.

Liu Shiwen was born in Liaoning, China, on April 12, 1991. Like many table tennis greats, she started playing young and excelled at the junior level, winning three gold titles. Her first major win at the senior level came in 2009 when she won gold in both the singles and team events at the World Cup. The next year, Shiwen won her first Asian Cup. In the time since these feats, she has won eight gold medals at the ITTF World Championships (four team, two doubles, one singles, one mixed doubles) as well as an impressive eleven top titles at the World Cup. Far from retirement, Liu Shiwen remains both one of the best current women’s table tennis players as well as one of the greatest of all time.

Li Xiaoxia was born on January 16, 1988, in Anshan, China. In her youth, she was trained by Chinese table tennis coach Li Sun. Her first great win was in 2006, when she won gold with her team at the ITTF World Championships. In 2008, Xiaoxia began winning gold medals on her own in singles competitions. At the 2012 Summer Olympics in London, she reached her career’s peak, winning gold in both the singles and team events. In the decade since, she has won an impressive seven World Cup titles, nine World Championship gold medals, and a third Olympic gold medal. Still playing for Team China, Xiaoxia intends to continue her streak of excellence for years to come.

Guo Yue is known as one of the greatest female table tennis players ever. She was born in Anshan, China, on July 17, 1988. Yue is well known for her left-hand grip and aggressive style of play. Yue played on the same teams as other great players on this list, such as Yining and Wang Nan. Yue’s most notable accomplishments include two gold and two bronze Olympic medals. She won gold medals in team table tennis in 2008 and 2012. Her bronze medals came from doubles table tennis in 2004 and singles table tennis in 2008. She was ranked number one in the world for female tennis table players during her playing days.

She faced controversy in 2015 after being kicked off the Chinese National team for poor behavior and a general lack of interest. Following this controversy, she went on to study finance at Tsinghua University in China. There have been no updates on her playing status since.

Deng Yaping was born on February 5, 1973, in Zhengzhou, China. She is known as one of the greatest female table tennis players of all time, having proven herself on the international stage in the Olympics and World Championships. At a young age, Yaping was a tennis prodigy but had a hard time getting onto a national team because of her height. Yaping stood only 4’11,” but finally got a chance to shine when she was 16. Immediately, she won the World Championships doubles with her partner, another all-time great: Qiao Hong.

She would go on to win two gold medals at each of the 1992 and 1996 Olympics, even beating her partner Hong in the singles final. She was ranked the number one women’s player in the world for eight consecutive years until retiring in 1997. After retiring, she was named Chinese Female Athlete of the Century, cementing her legacy as one of the all time greats. After her career in table tennis, Yaping went on to pursue a very professional path, earning a masters from the University of Nottingham in England in 2002 and a Ph.D. in Land Economy at Jesus University in 2008.

Zhang Yining dominated women’s table tennis during the first decade of the 21st century and is one of the greatest female players of all time. She was born on October 5, 1981, in Beijing, China. Throughout her career, she won 19 world tournament titles., She was dominant in the Olympics as well, winning gold in both the women’s singles and doubles at the 2004 and 2008 Olympics. Yining was also ranked as the number one female player in the world according to the ITTF from 2003 to 2009. She used the same shakehand grip technique as Guo Yue. Her career came to a sudden end in 2011 when she moved to the United States to help globalize the game of table tennis and focus on her education.

Wang Nan is another great female table tennis player dominating in the era after Deng Yaping retired. She was born on October 23, 1978 in Fushun, China. She is also a left-handed player and started to play the sport when she was just seven. She is one of only three female players to win four Olympic gold medals in the singles event. She was ranked as the number one female player in the world for around two years and won a total of 15 World Championship titles from singles, doubles, and team competitions. Nan went on to become the leader of the Chinese national table tennis team after the retirement of Deng Yaping. After she retired as a player, Nan was also rightfully named into the Table Tennis Hall of Fame.

Qiao Hong was the partner of all-time great Deng Yaping, and the two formed a feared and highly skilled doubles team. She was born in Wuhan, China on November 21, 1968. During her career, she won a total of four Olympic medals, two of which were gold (doubles with Yaping), and then won bronze and silver in singles play as well. She was also ranked second in the world (by the ITTF) for many years, right under Deng Yaping. Like her partner, Hong also played with the shakehand grip style and has continued on as a coach and a member of the Chinese Olympic Committee. In 2005, she was inducted into the ITTF Table Tennis Hall of Fame in 2005.

Who is the best women’s table tennis player of all time?

The best female table tennis player of all time is Ding Ning. During her career, she achieved a remarkable three Olympic gold medals (two team, one singles), eight ITTF World Championships, and ten top World Cup titles. Both on her own and as part of Team China, Ning was a powerhouse on the court and proved herself continuously until her retirement in 2019.,

Which women’s table tennis player has the most Olympic medals?