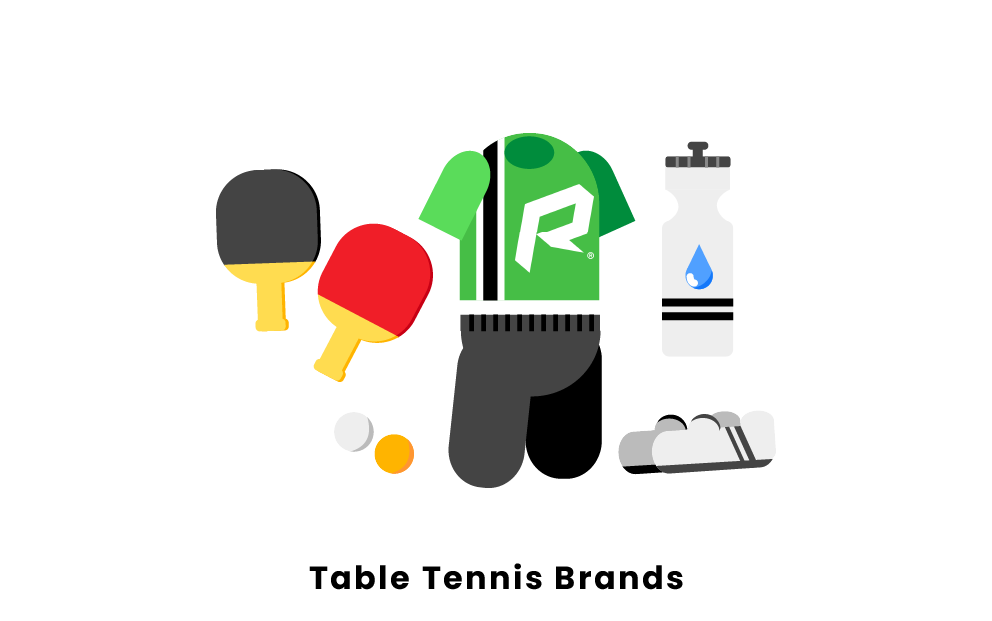 Table tennis, or ping pong, is a fun and often recreational sport that requires two to four players. When it comes to choosing the surface and equipment for your table tennis game, these brands offer high-quality products to ensure smooth gameplay. This list compiles the top ten brands to purchase table tennis equipment from, whether you’re a new player or a professional, and details the origins of the brands.

What are the most popular table tennis brands?

Stiga has been providing high-quality table tennis products since 1944. The Swedish company quickly rose to a status entailing global notoriety as they were one of the first companies to mass-manufacture products for table tennis efficiently. To this day, Stiga sells all table tennis equipment, everything from paddles/blades, to balls, bags, tables, clothes, and much more. Additionally, they sell various other sports novelties, like scooters, tabletop hockey, and more. Stiga is at the top because today, the majority of ping pong balls you see are Stiga brand, showing their dominance in the marketplace. The brand sponsors multiple professionals, including Andrea Pavlovic, Debora Vivarelli, and Romain Ruiz.

Butterfly has been a longstanding and honorable brand since its founding in 1950. Authenticity is never a question for Butterfly, as it was founded by Hikosuke Tamasu, a Japanese table tennis player who wanted a great table tennis equipment company. The company was first known as Tamasu before it went by “Butterfly.” Butterfly has been credited with developing state-of-the-art table tennis rubbers such as the popular Tenergy series and Dignics series. They sell all sorts of ping pong products such as balls, paddles, apparel, and even shoes. The brand is especially well-known for its quality tables. Butterfly sponsors Brian Afanador, Timo Boll, and Cheng I-Ching, along with a variety of other professional players.

Cornilleau was started in 1946 by Emile Cornilleau, who opened a joinery shop in France, recognizing a high demand for products in an area recovering from war. He started making tables, cabinets, and other wood products. It was not until 1969, when a Parisian company ordered the manufacturing of 300 ping pong tables, that Cornilleau’s notoriety in ping pong was born. Today, the French company can boast a table production number of over 3 million. Cornilleau is most recognized for its tables but also sells ping pong balls, paddles, and other accessories. Cornilleau has also sponsored a number of competitions for the past 30 years, such as the Spanish and French Open in 1989 and the Italian Open in 1992, solidifying its position as a top-tier table tennis brand.

Yasaka was founded in 1947 by two men named Hirosi Yaoita and Sakamoto, the name being a hybrid of their two names. Yaiota had humble beginnings and wanted to make quality table tennis products to improve his profession. Shortly after, his company made waves on a global scale. Making its mark on the table tennis world, Yasaka introduced “MARK V,” which revolutionized rubber technology. Rubber is on either side of a standard ping pong paddle, and Yasaka patented the kind that is used in most paddles today. One notable player that Yasaka has sponsored is Ma Lin, who won multiple gold medals while representing Yasaka. The Japanese brand has continually sold all sorts of quality table tennis products, while being highly recognized for its rubber innovation.

Karl Frey founded Joola in 1952. Quickly after its founding, the company started to manufacture ping pong tables. While tables became the main focus of Joola, they started to manufacture blades and rubbers starting in 1973, leading to its sales of balls, accessories, apparel, and more. Joola is a well-established table tennis and pickleball manufacturer, making almost any piece of equipment you could need for either sport. Joola had the honor of supplying the official table of three consecutive Summer Olympics (1996, 2000, 2004). It is one thing to be on the come-up as ping pong is growing as a global sport, but when a company can get the type of global recognition to be the table used at the Olympics, the quality of their product becomes unquestionable. They sponsor both club teams and professional players, with their roster including Lily Zhang and the Alguetti brothers.

Tibhar was started in Germany in 1969 by Tibor Harangozo, a professional table tennis player. He focused on making a great blade and rubber, but Tibhar has expanded to sell tables, balls, and apparel, providing a more extensive range of products. They sponsor multiple players, including Emmanuel Lebesson of France, Vladimir Samsonov of Belarus, and Tomislav Pucar of Croatia. Tibhar was the official supplier of the 2007 World Table Tennis Championships in Zagreb. The company also sponsors the Polish, Brazilian, and Belgian national teams, among others. Tibhar is a solid brand that has produced consistently quality table tennis products since the sport began to gain notoriety worldwide.

Donic has an interesting history that dates back to 1889. In the beginning, “Donic Schildkröt” was a brand that had a large focus on rubber and celluloid. They started to make balls and rubbers in terms of table tennis products, but today they have a larger range of goods for sale. They are based in Germany and have been a top brand for over a century. Authenticity is unquestionable for this brand as they have worked with the top players in the world to focus on making quality products. Donic sponsors multiple clubs, national teams, and professionals. The brand has no shortage of global recognition either; Donic has been the supplier of various table tennis products for multiple World Table Tennis Championships and has provided the tables for numerous European championships.

Nittaku was started in the 1920s as a production company. It was not until 1947 that it started manufacturing table tennis products. Like many other brands on this list, Nittaku can boast a global rise to popularity around the same time as the sport became popular. The company does not have much of a presence in America, as its HQ is located in Tokyo, Japan, but is still recognized as a top-tier table tennis brand worldwide. Nittaku has provided the official balls for three Olympics and seven consecutive European Championships. They sponsor a number of Asian table tennis pros, including Mima Ito, Hitomi Sato, and Masataka Morizono. To add to the brand’s notoriety, it is a sponsor of the International Table Tennis Federation.

Victas was started in 1931 in Tokyo, Japan. They specialized in the production of balls made of celluloid initially, but to this day they sell everything from blades to rubber, tables, accessories, apparel, and more. The thing that sets Victas apart from a good number of the brands on this list is their longevity. It was one of the first companies to be well-known for selling table tennis products during the beginning of ping pong’s popularity. They sponsor players like Yuto Muramatsu, Kazuhiro Yoshimura, and Kenji Matsudaira, to name a few. What really solidifies Victas as an elite brand is its consistency in manufacturing quality table tennis products for over 85 years. Especially considering that ping pong has evolved and changed so much, Victas has always been known as a brand that makes quality products and adjusts to the needs of the sport.

Andro was started in 1970 in Dortmund, Germany. Scholer, a larger company at the time, and Sport-Micke, a similar brand started by Wilfred Micke of the German national table tennis team, merged after Sport-Micke was ordered to make custom racquet products. To this day, they are one of Germany’s leading table tennis brands, selling a multitude of ping pong products such as blades, rubbers, footwear, and balls. They have numerous pro table tennis players representing their brand, such as Sharat Kamal Achanta of India, Simon Gauzy of France, and Kilian Ort of Germany. Something that sets Andro apart from a lot of these brands is its involvement in the development of ping pong skills in youth - they have sponsored kids tournaments in Germany for many years and hold their own event called the Andro Kids Open.

Killerspin is one of the newer companies to make an impact on the table tennis industry. Founded in 2001 by Robert Blackwell Jr. in Chicago, Illinois, Killerspin has followed its core values of providing stylish, high-quality table tennis equipment available and forming strong relationships. The brand values its connection with the community, hosting table tennis events across the United States and distributing products all over the world. They also offer an ambassador program for up-and-coming players, provide veteran discounts, and sponsor numerous professionals. Killerspin produces a variety of tables, paddles, and other accessories. There is even an option to customize the equipment you order from the company. Overall, Killerspin has become one of the most prominent American table tennis brands and continues to impress its customers.

XIOM is a relatively new brand in the table tennis industry that was founded in 2007. They specialize in producing table tennis rubber sheets and blades that are extremely high-quality and top-of-the-line in terms of performance. XIOM also produces accessories such as grip tape and carry cases, and even has its own lines of table tennis balls. They started as a company that primarily served the Asian market but have expanded into the global market as a top table tennis brand in the past decade.