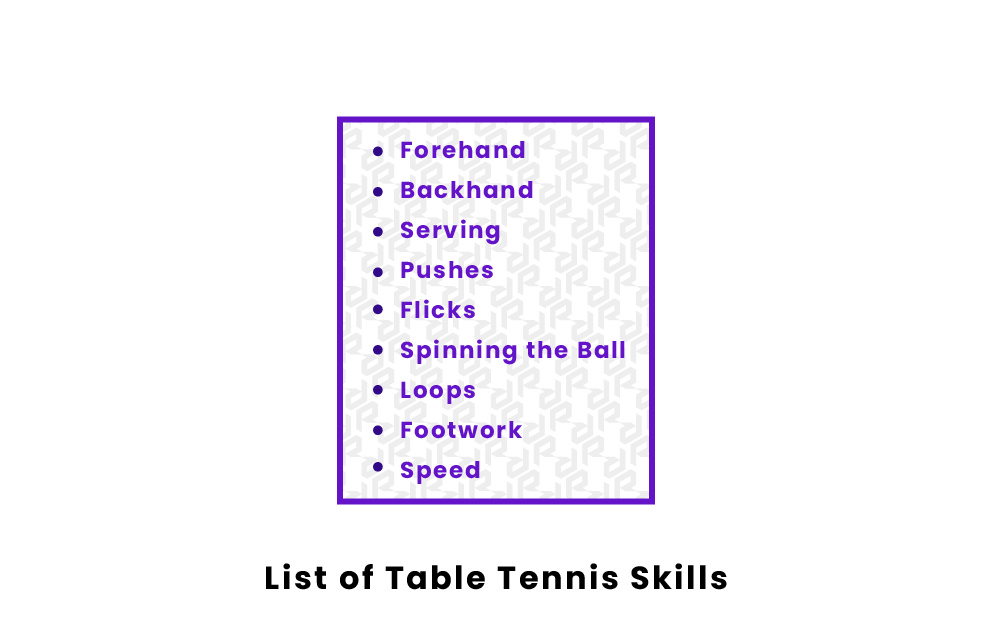 The sport of table tennis comes from humble beginnings. Something that was once just a parlor game in England has found itself in houses, basements, garages, college dorms, and modern office spaces around the entire world! As of 1988, table tennis has even made it to the Olympics! Although the premise of table tennis is simple, there are many skills that go into it that make a table tennis player great.

A forehand, or forehand drive, is often the first and one of the most fundamental skills that a table tennis player learns. This swing occurs when the ball is coming to the side of your body that is holding the paddle. At the peak of the ball's bounce, the player rotates their body and arm to aggressively hit the ball back over the net.

A backhand, or backhand drive is the other most fundamental skill that a table tennis player must learn. This swing occurs when the ball is heading towards the side of the player's body that is not holding the paddle. In such a scenario, the player could adjust their stance and use footwork to make it a forehand swing, but oftentimes the ball is too fast for that. Instead, they use a backhand swing. They move their paddle across their body's center point and hit the ball with the backside of the paddle.

Forehanded and backhanded pushes are used for returning short balls. A short ball means that your opponent hits the ball and it lands on your side but still very close to the net. When this happens, the table tennis player leans forward so they are closer to the ball and net, and instead of swinging at the ball, they are making a short, chopping movement to brush the bottom of the ball with their paddle. This generates enough force to get the ball over the net, without it flying off the table. This can be done regardless of what side of your body the ball lands at.

Forehand and backhand flicks are used to aggressively return an opponent's ball that has spin on it. Like a push, this often happens when the ball is close to the net. Unlike a push, however, instead of brushing the bottom of the ball to get it back over the flick uses the quick motion of your wrist and elbow to get the ball right back over the net. This will land on the table more constantly than a full on swing when you are returning a short ball.

In modern table tennis, loops are the most common forms of offense for more advanced players. A loop consists of the player making a circle with their paddle and grazing the ball as the paddle goes from low to high. This generates a lot of spin.

A table tennis serve consists of hitting the ball from your hand, bouncing it once on your side of the table and onto any part of your opponent's side. There are countless serving variations used by the best table tennis players, but the most basic forms are forehand and backhand serves.