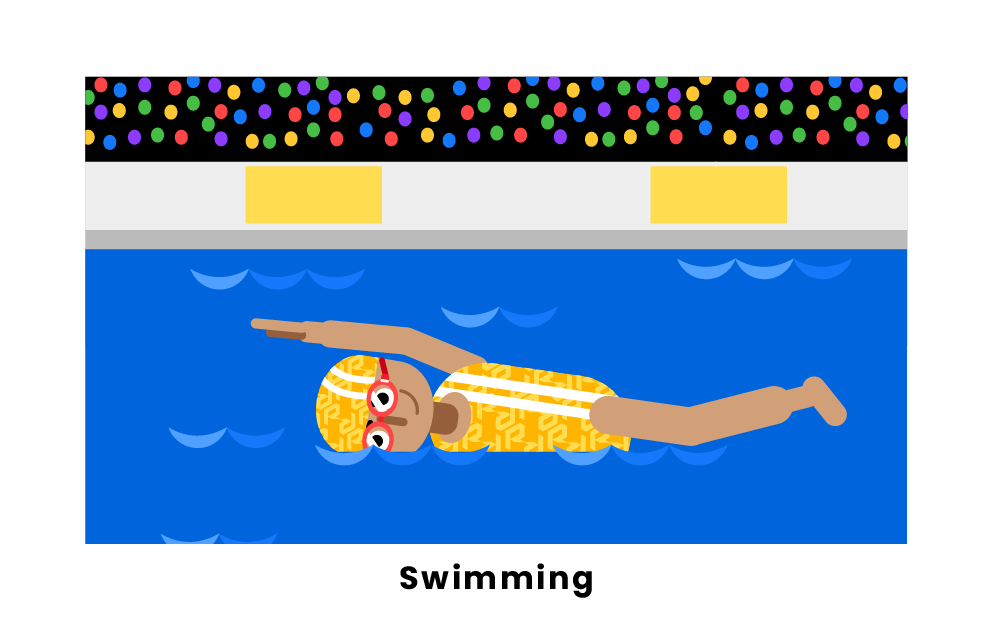 Swimming is a popular sport both for recreation and competition. There are four strokes (backstroke, breaststroke, butterfly, and freestyle) which are raced at various lengths. There are also three 4-person relays and an event called the individual medley, which combines all four strokes that are raced. The objective is to be the first person to touch the wall in a race, as well as achieve personal best times in each event.

Races are performed in some combination of one of four strokes: butterfly, backstroke, breaststroke and freestyle. Of these, breaststroke is the earliest to have been practiced. Swimming a certain number of laps of each of the four strokes is known as an individual medley (IM). Modern-day races range from 50 to 1500 meters in distance. Freestyle is raced at distances of 50, 100, 200, 400, 800, and 1,500 meters, and the other three strokes are only raced at distances of 100 and 200 meters. IM is raced at distances of 200 and 400 meters. There are also three relay events, where groups of four swimmers complete a given distance one after the other: there are 4 x 100 and 4 x 200-meter freestyle relays and a 4 x 100 medley relay. 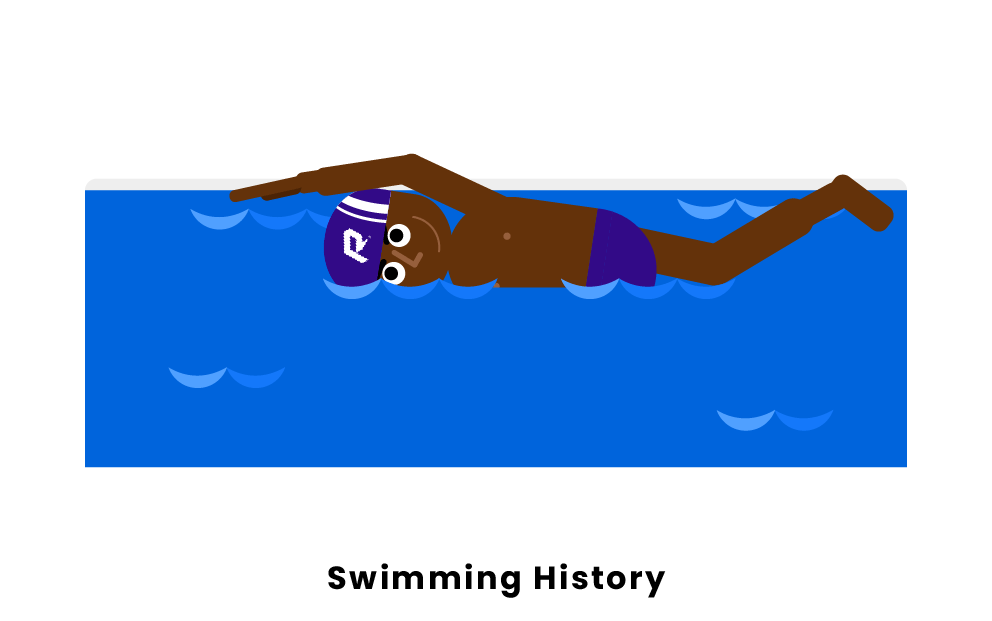 Swimming has been practiced as early as 2500 BCE in ancient Egypt, Assyria, Greece, and Rome. There is evidence of swimming races taking place in Japan as early as the 1st century BCE with organized swimming events being held in Japan during the 19th century. In other ancient civilizations, such as ancient Greece and ancient Rome, athletes and soldiers used swimming as part of their training.

Swimming began to grow in popularity both for recreation and as a sport in the 19th century, with the first swimming organization forming in London in 1837 and the governing body for swimming in Great Britain forming in 1869. From 1882 through 1889, several countries throughout Europe founded national governing bodies for swimming. In the United States, swimming was originally organized as a sport nationally by the Amateur Athletic Union when it was founded in 1888. The Fédération Internationale de Natation Amateur (FINA), the international governing body for all amateur aquatic sports, was founded in 1909. 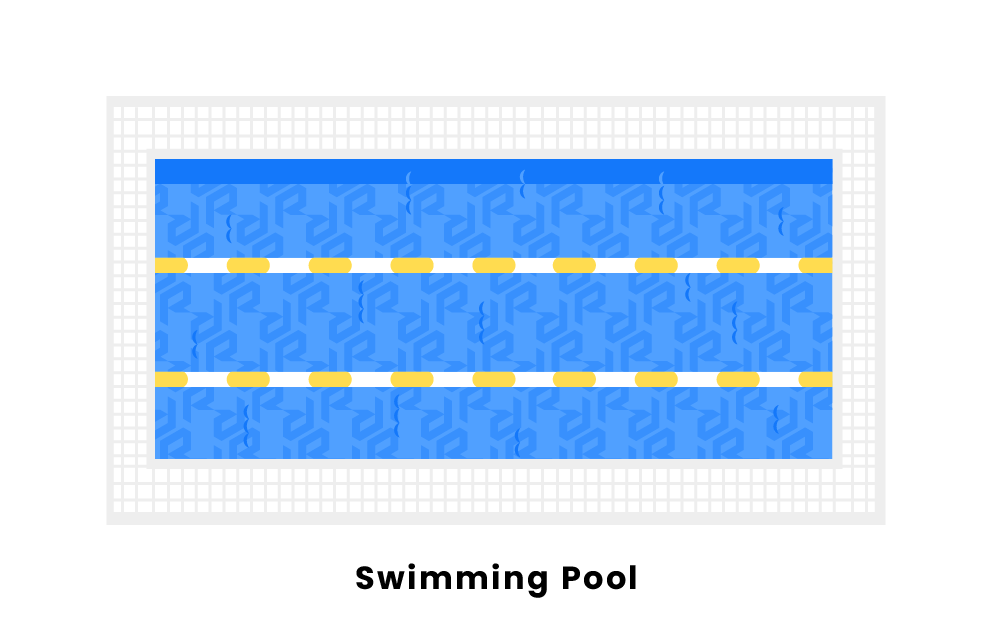 FINA, swimming's governing body, has a set of guidelines and requirements in order for pools to be acceptable to use for competitions. Within competitive swimming there are two regulation pool sizes: short course pools (25m in length) and long course pools (50m in length). In the United States, some pools are 25 yards, rather than 25 meters, and are accepted by USA Swimming, however international records accepted by FINA can only be swum in long course, 50m pools.

All pools are divided into lanes using lane lines and have backstroke flags at both ends of the pool, typically 5m away from the end of the pool to alert backstrokers that are approaching the wall. Each lane has a starting block at one end of the pool where the swimming race begins. 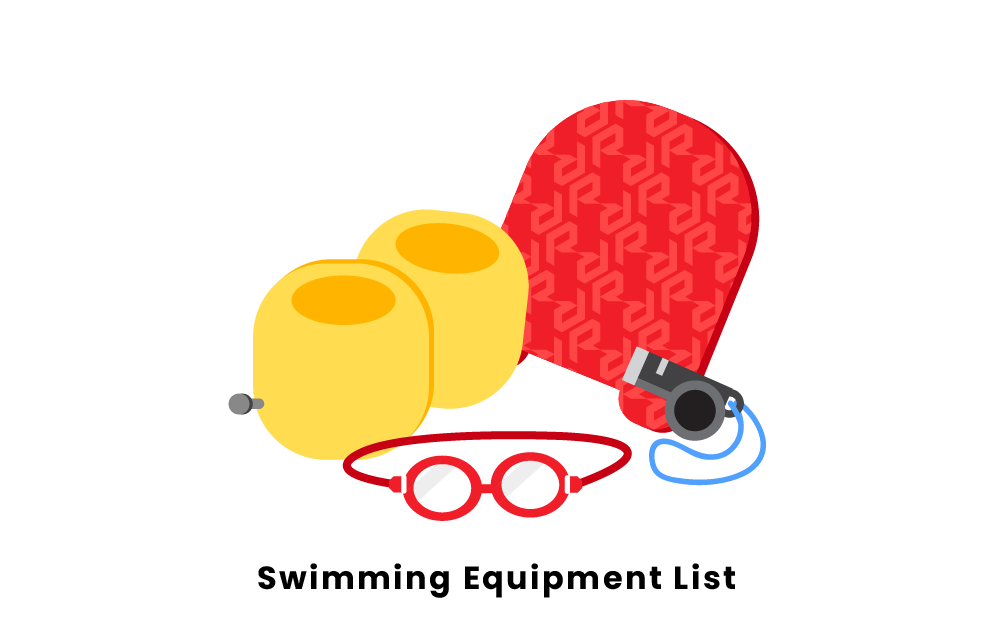 Swimming is not the most equipment intensive sport, but there are still important pieces you will need. They include:

Swimming caps: They help reduce drag from hair. There are two types of swimming cap materials: silicone and latex.

Tech suit: These suits are typically used for more important competitions and cover more area on the body. They are usually very tight with high compression.

Fins: Both long and short for different types of swimming. 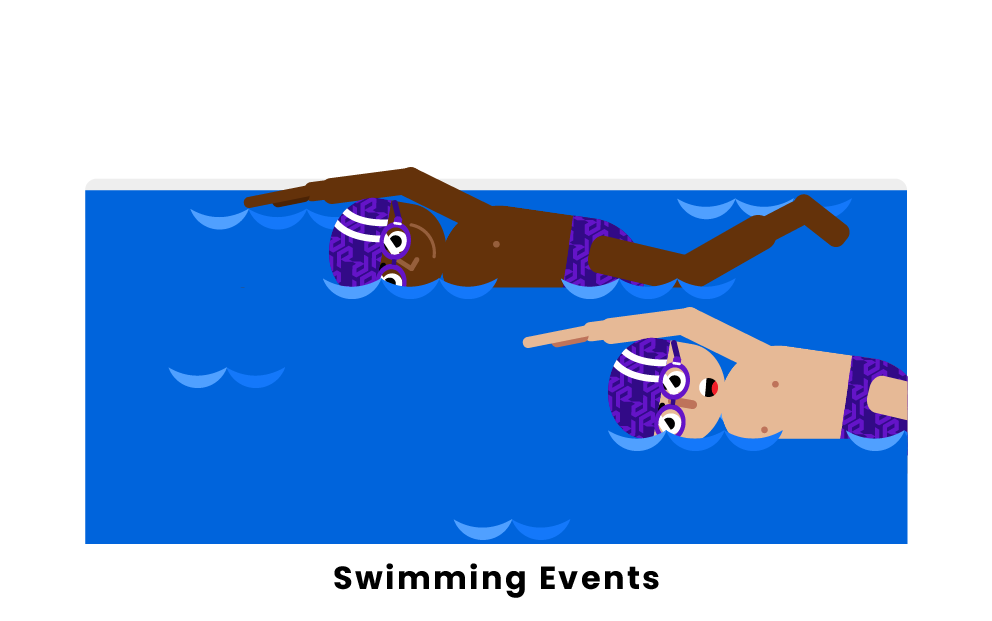 There are four strokes used in swimming: butterfly, backstroke, breaststroke, and freestyle. During swimming competitions, swimmers compete in different events at differing distances.

Along with the races of individual strokes, swimming also has an event known as the individual medley where swimmers use all four strokes in the order of butterfly, backstroke, breaststroke, and finally freestyle, within the event.

Although swimming is a very individual sport, there are also relay events where teams of 4 swimmers race, entering the water one at a time once the swimmer before them touches the wall. There are two relay styles, freestyle where every swimmer uses the freestyle, and the medley relay where each of the four swimmers uses a different stroke. The order for the medley relay is backstroke, breaststroke, butterfly, and freestyle. Backstroke is first during the medley relay because swimmers must start in the water for backstroke races while the other strokes require swimmers to dive in head first off of a diving block.

Freestyle relays are raced at the 4x100m and 4x200m distances

Medley relays are raced at the 4x100m distance 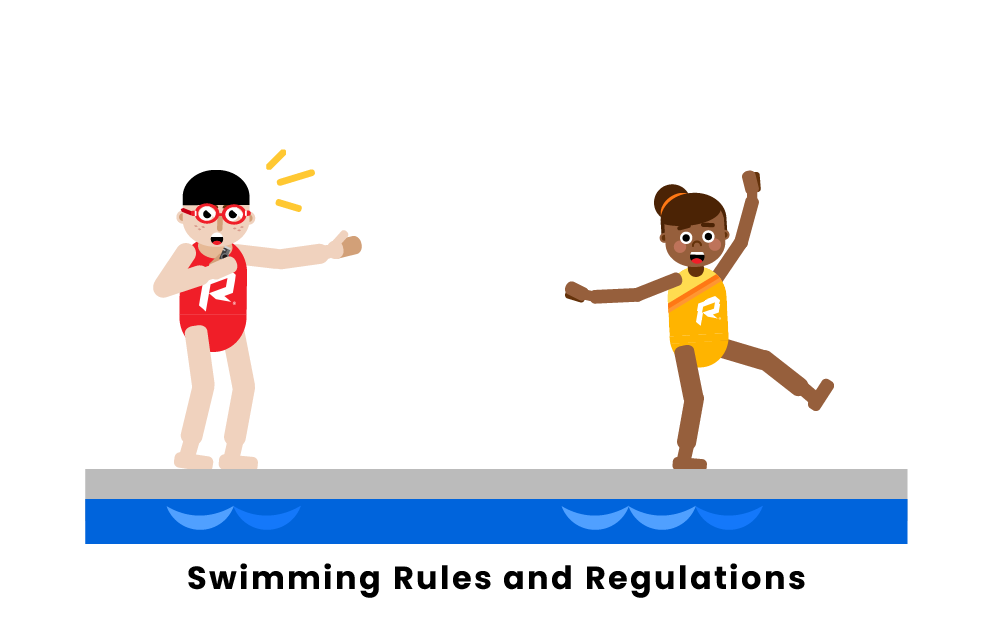 Each race must begin with a start. A head first dive is used for all freestyle, breaststroke, butterfly, and individual medley events, while the backstroke and medley relay events begin in the water. For starts on the block, swimmers will step on to the blocks after one long whistle from the referee. On the command "take your mark," swimmers will get into a crouched position with one foot in front of the other. When each swimmer is set, there will be a signal to start the race. At the signal, usually a loud beep or whistle, the swimmers dive into the pool and begin the competition.

For backstroke, the swimmers will jump into the water and grab the handles on the front of the starting block upon the long whistle rather than stepping on top of the block. The swimmers will get into their start position on the command "take your mark," pushing off of the wall to begin the race at the sound of the starting signal.

If a swimmer performs their start into the water before the starting signal sounds, they are immediately disqualified from the race. During relays, the lead off swimmer will do a traditional start into the water and each of the three following swimmers are not allowed to enter the water until their teammate has touched the wall. Swimmers are at no point allowed to touch or push off the bottom of the pool and will be disqualified for doing so. The swimmer's head must come above the surface of the water no more than 15m into the race.

Some other rules pertaining to the individual strokes are:

Breaststroke: During a breaststroke swim, the swimmer is not allowed to swim on their back or use any sort of up and down kicking or arm motion. At every turn and the finish of the race the swimmer must touch the wall with both hands.

Butterfly: During a butterfly swim, the swimmer must move both arms at the same time and may not separate their legs. For this stroke, they must also touch the wall with both hands at every turn and at the end of the race.

Backstroke: During a backstroke swim, the swimmer must remain on their back the entire time, with the exception of one stroke on their stomach within the flags to execute a flip turn. 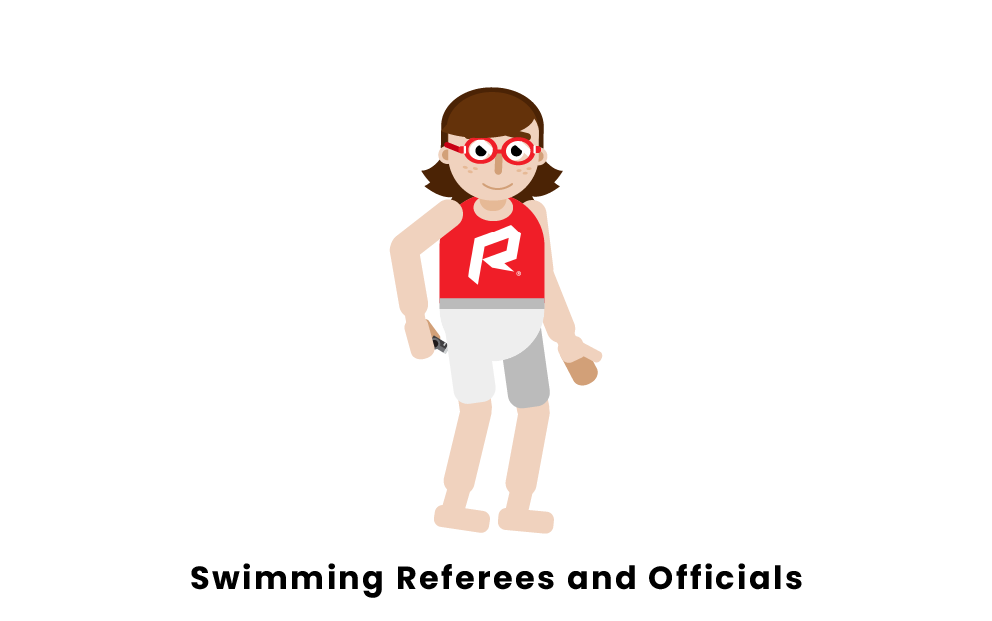 While swimming isn't a sport typically associated with referees and officials, there are actually seven types of officials present during a swim meet.

Referee: In swimming, the referee has total control during the meet. They enforce the rules, settle disputes between coaches and other officials, and call swimmers to the blocks at the beginning of each race.

Clerk of Course: The clerk is also referred to as the bullpen. They are responsible for organizing the swimmers before their event based upon their heat times.

Timekeepers: Timekeepers record the time of each swimmer in their lane and there are typically two assigned to each lane. They each have a stopwatch inorder to record a swimmer's split times and final time.

Judges of Stroke: These judges are responsible for ensuring that swimmers are using proper technique during the race and may sometimes help the inspector of turns. 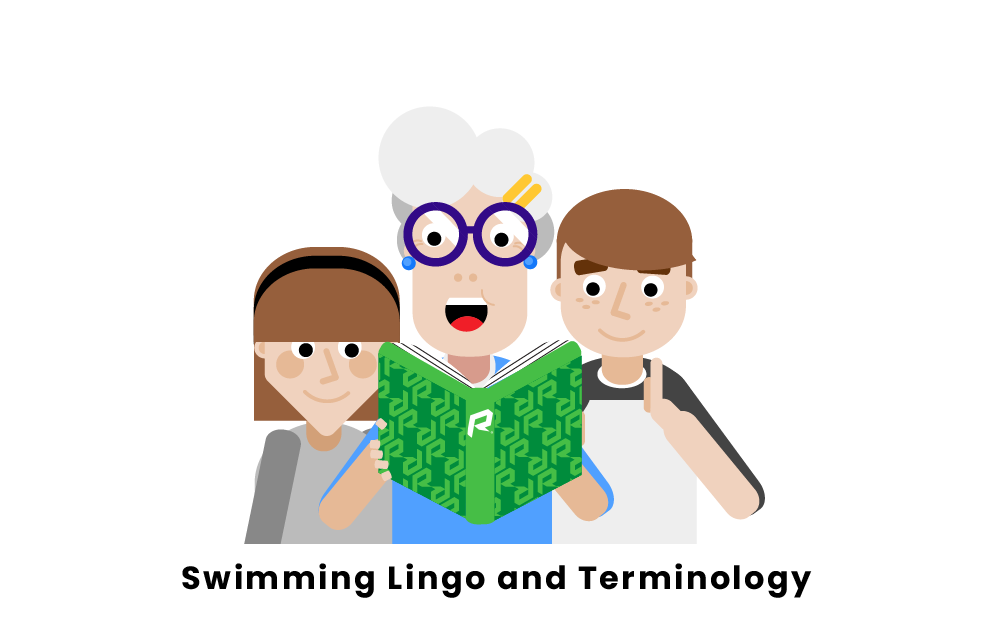 Short-course: Refers to the part of the swimming season where races take place in 25m pools rather than olympic-sized 50m pools. 25m pools are usually found in public and college recreation centers and high schools.

Long-course: Refers to the part of the swimming season where races take place in olympic-sized 50m pools. 50m pools are usually found in colleges with swimming programs and higher end swimming facilities.

Personal Best: The best time that a swimmer has in a particular event. It is their own personal record and a time they strive to lower each time they race.

Even Splitting: Completing each 'split,' typically measured in 50m increments of a race, around the same time.

Negative Splitting: Completing the back half of a race or set faster than the first half.

Set: A grouping of drills or distances used in training. (5x200m freestyle is a set that totals 1000m) 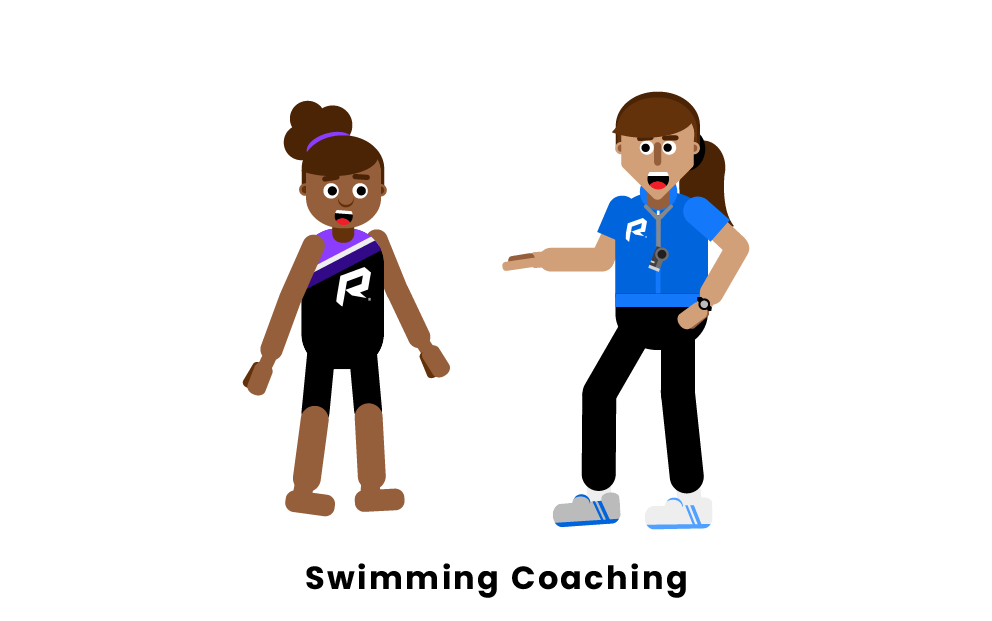 In order to become a swim coach in the United States, the coach has to be a member of USA Swimming and must have completed safety training, pass a criminal background check, and fulfill other coaches' education as required by USA Swimming. A CPR/AED certification for both adults and children is also required to become a USA Swimming member coach. 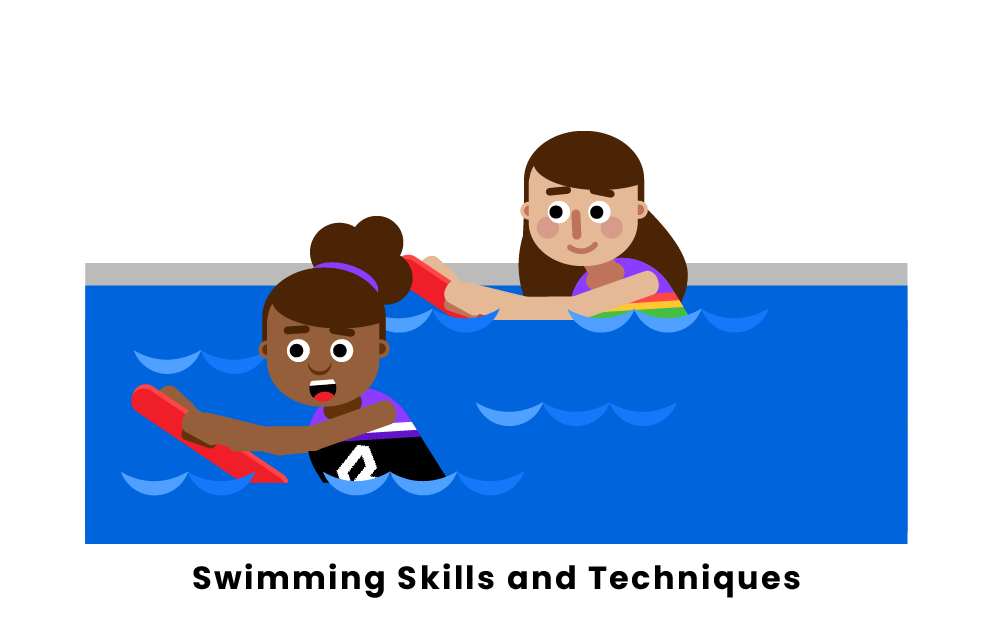 There are five basic skills you'll need in order to begin swimming either recreationally or competitively: 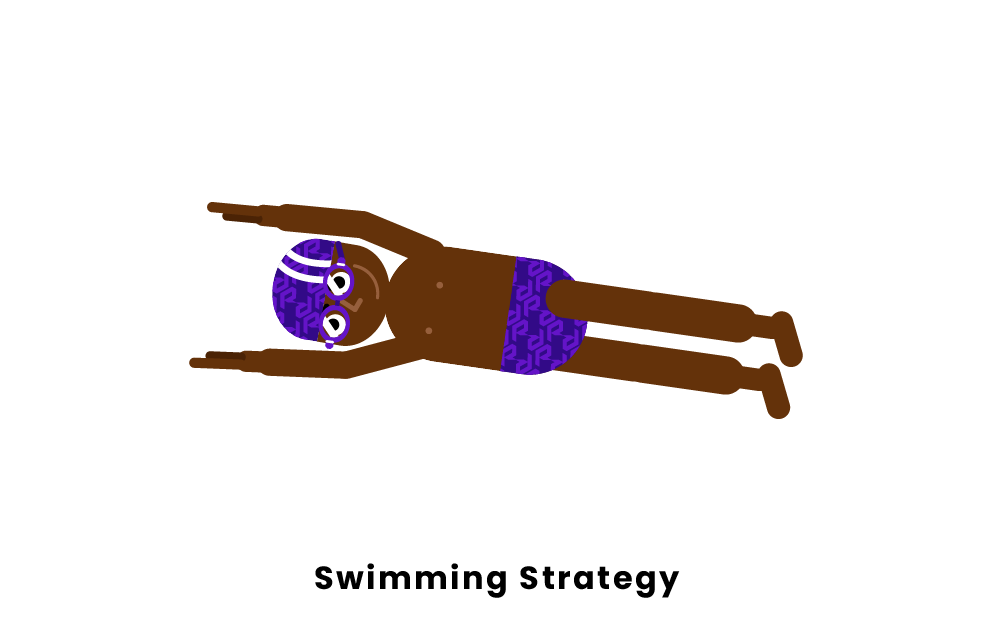 While the goal of swimming is to be the first person to touch the wall, there are three race strategies that some swimmers will use.

"Fly and Die" is a strategy used in shorter, sprinting events

"Sally/Sammy Save-Up" is used to pace for longer events, building up to a sprint in the final split of the race

"The Even Splitter" is used to hold the same pace per fifty, splitting every fifty 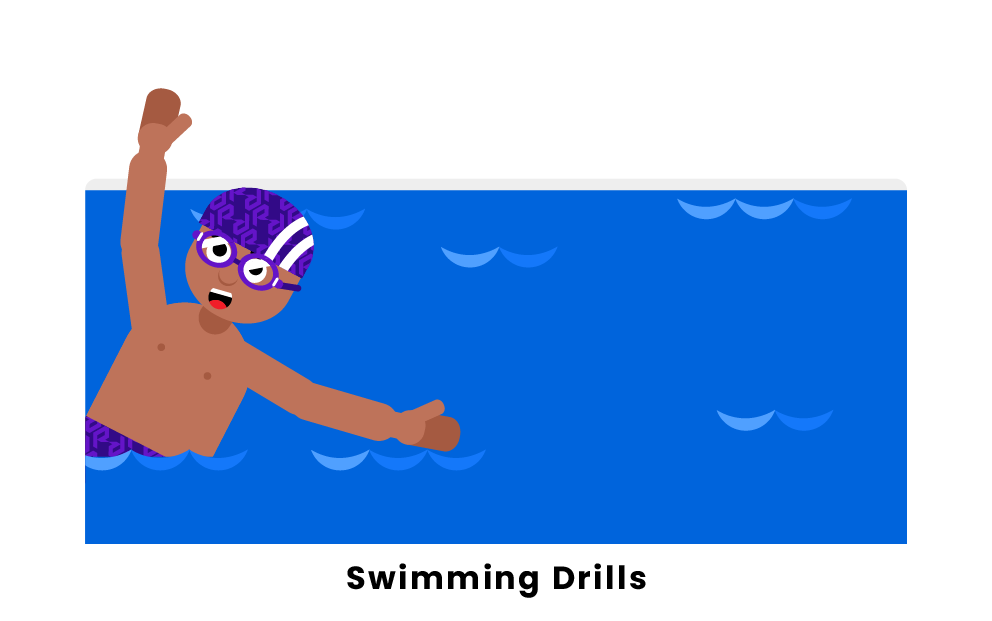 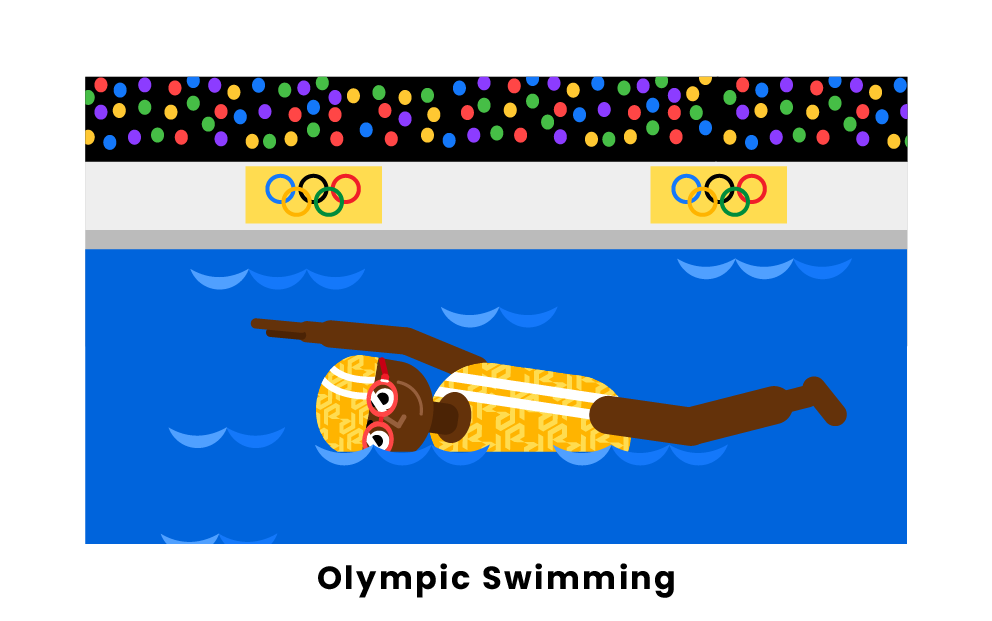 Swimming has been included in the Olympic program since the inception of the modern Olympic Games in 1896. Women's swimming events would be added in 1912. Some of the most dominant countries in olympic swimming include Australia, Canada, Denmark, France, Germany, Great Britain, Hungary, Japan, and the United States. 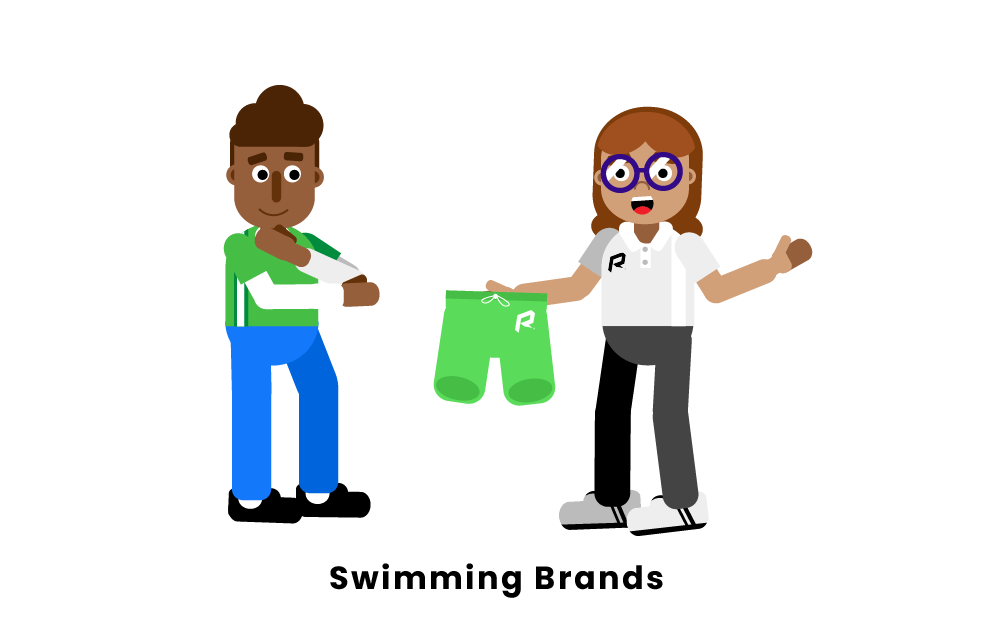 Some of the most popular brands among swimmers are:

Many swim brands, such as Speedo and TYR, also sponsor individual athletes and use them to market their products. 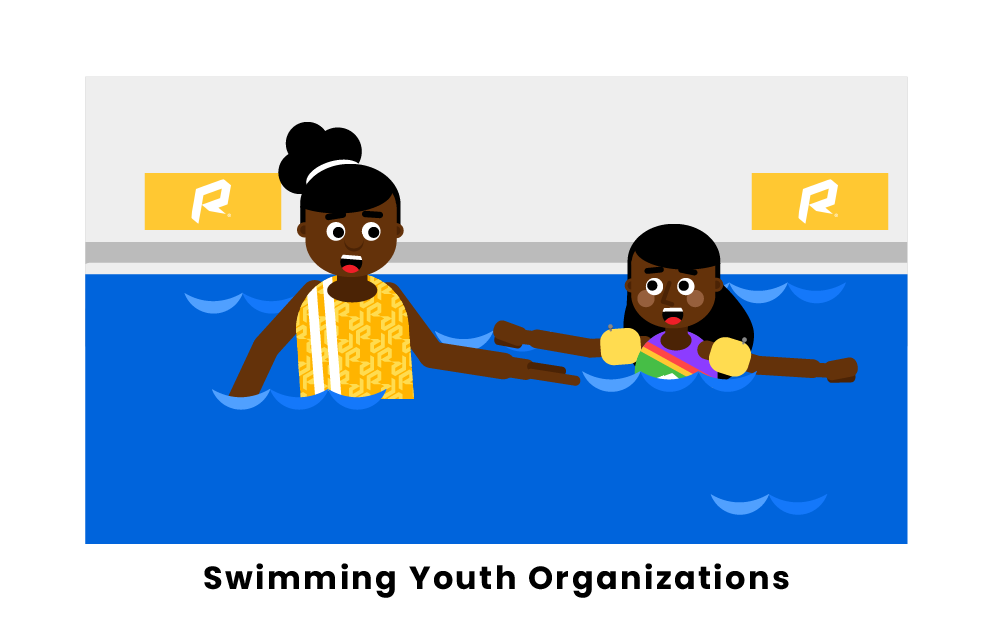 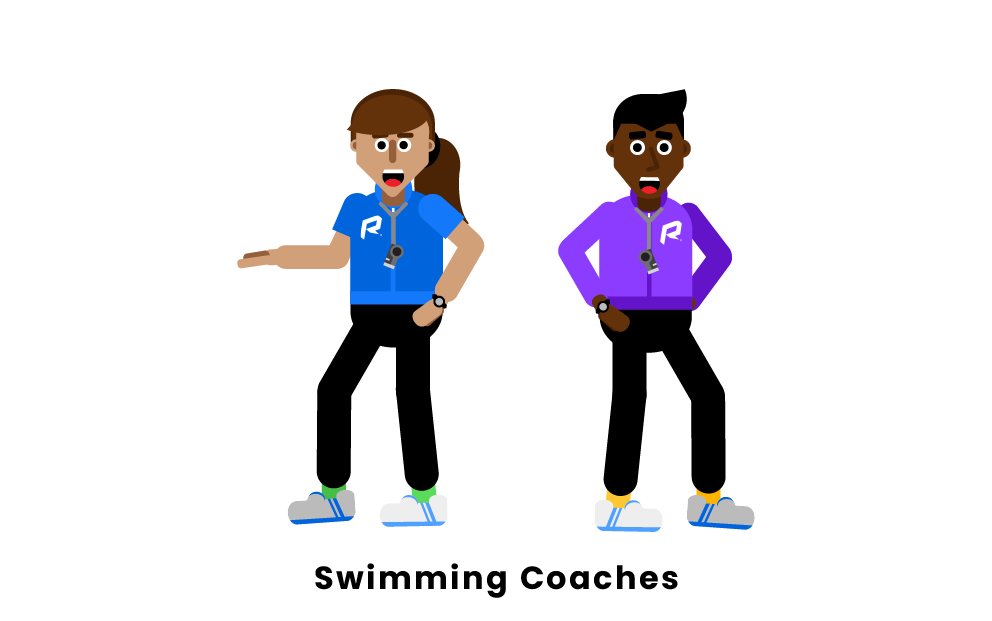 David Marsh: Head coach of Team Elite Aquatics, the top pro swimming training group in the US based in San Diego, California. Served as the Head US Olympic Women's Swim Coach in Rio, leading them to the most medals in USA Swimming's history, and has coached 49 Olympians from 19 different countries.

Teri McKeever: Head swimming and diving coach for the University of California, Berkley's women's team. Regarded as one of the most successful swim coaches in the United States, she was the head coach of the US Olympic women's swim team in 2012 at the London games and assistant coach at the 2004 and 2008 Olympic games. 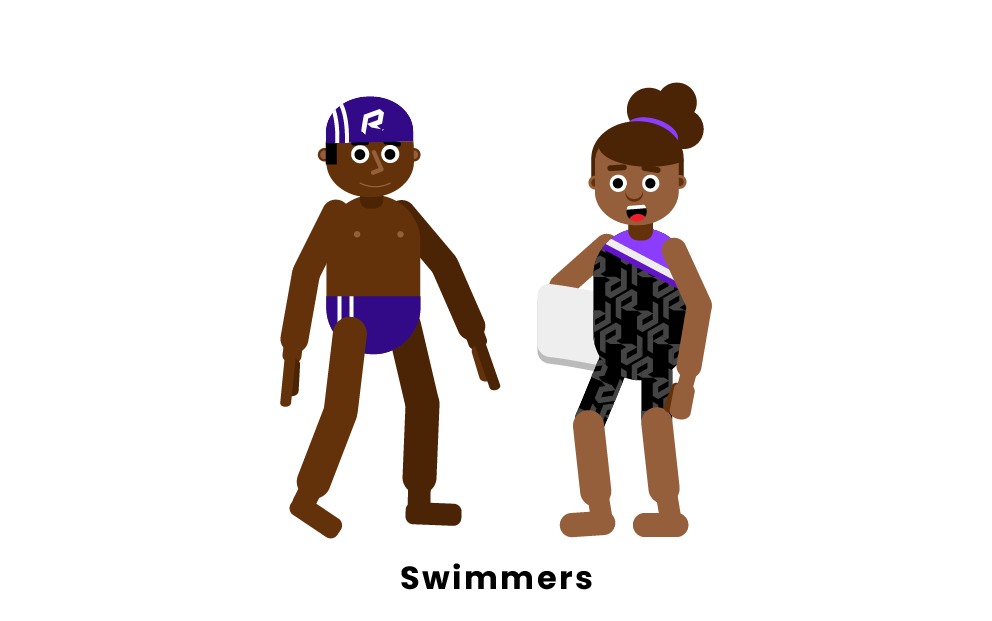 Some of the most famous names in swimming are:

Prior to 2019, there were no professional swimming teams or leagues. In 2019, the International Swimming League began its inaugural season as a global professional swimming league. The ISL has had to fight FINA in order to protect the swimmers participating, some of whom are large names in the sport, from being banned from international competition, including the Olympics, due to competing in a non-FINA sanctioned international competition. FINA eventually allowed swimmers to compete in the ISL, ensuring that they will not be banned from competitions such as the FINA World Championships and the Olympics. 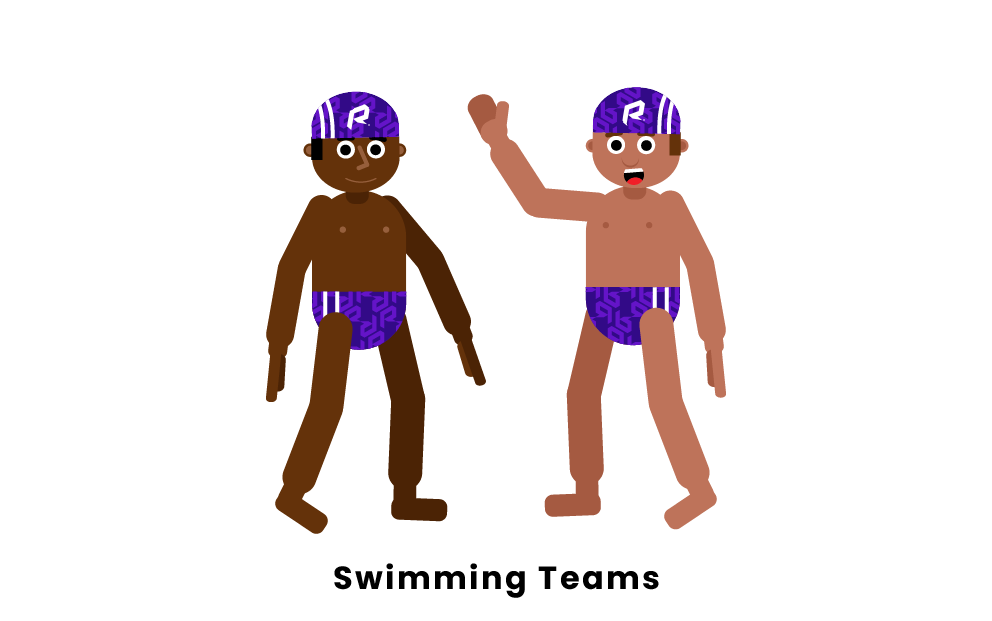 The teams in the International Swimming League, or ISL, are:

While there are various swimming dual meets that occur each year at various levels of the sport, some of the biggest swim meets are:

Swimming World Magazine: One of the largest swimming magazines in the world, offers news, training, technique, and other lifestyle articles

Swimming as a sport is popular, both recreationally and competitively, and uses the propulsion of the body through the water. Competitive swimming is similar to track and field and uses racing style of competition.

What are the types of strokes in swimming?

Is swimming an olympic sport?

Pages Related to What is Swimming?