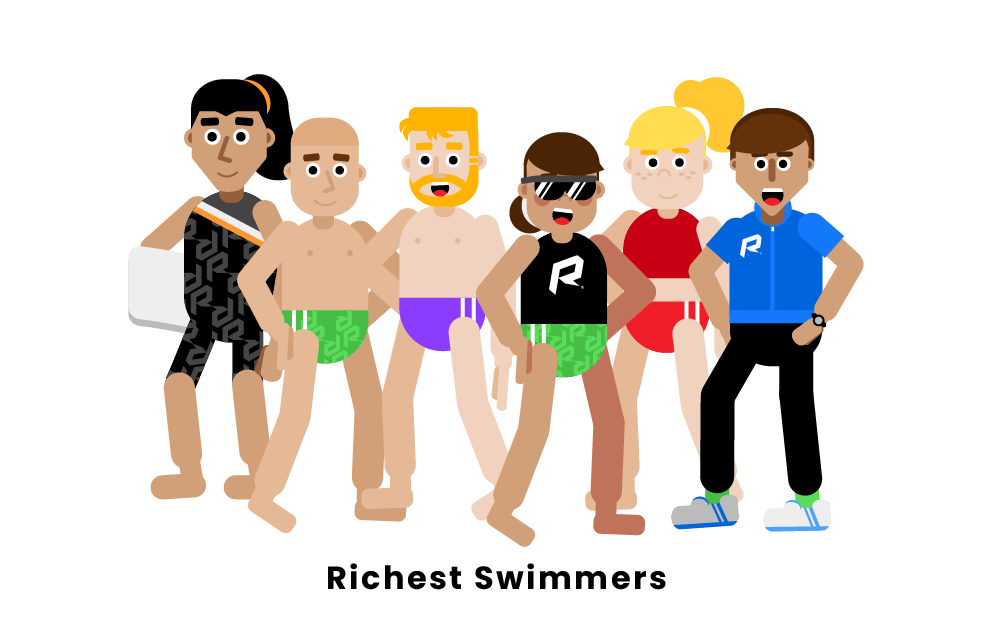 For the best swimmers in the world, their sport is a means to amass net worths that list in the millions, or if they play their cards right, up to the tens or even hundreds of millions. This is done primarily through winning money from contests, gaining sponsorships, and being paid to do endorsements for companies.

Who are the richest swimmers in the world?

As perhaps the most famous swimmer in the history of the sport, Michael Phelps has managed to collect a net worth of $100 million. Much of Phelps’ money came from endorsement deals as companies were desperate to be associated with one of the greatest swimmers of all time. Companies paying him included Omega, Visa, Subway, Colgate, and Kellog’s. He was also sponsored by the swimwear brand Speedo, who reportedly gave him a whopping one million dollar bonus after his legendary showing at the Beijing Olympics, where he won eight gold medals.

With a net worth of $20 million, Mark Spitz’s groundbreaking performances in the sport of swimming proved to be very lucrative. Mark Spitz dominated the 1970s in swimming, including at the Munich Olympic Games, where he won seven gold medals. He made much of his money from endorsements and sponsorships, including $7 million in the two years that followed his stunning Munich performance. After his swimming career, Spitz found new success outside of the pool. He began acting in TV shows and commercials and actually started a real estate company in Beverly Hills. He also works as a stock broker.

The Swedish superstar swimmer Sarah Sjöström is reportedly worth a total of $12 million thanks to her extraordinarily successful career in swimming. Throughout the years, Sjöström has been one of the most dominant swimmers in competition. She has topped the International Swim League’s list of top earners in multiple years, including in 2021, when she made a total of $269,000, as well as in 2019, when she won $139,000. Like other swimmers, Sjöström has managed to find a few sponsors and endorsement deals that pay her big money to represent their brand. Her main sponsor is Arena, which is one of the most famous swimwear brands in the whole world.

Being one of the most famous names in all of swimming, it’s no surprise that Ryan Lochte has managed to acquire a net worth of $8 million. He has made quite a bit of money from both his career in swimming and his likeness that brands want to cash in on. During his career, which included 12 Olympic medals, Lochte had some of the most sought-after sponsors in the swimming world. His two main sponsors were Speedo and Polo Ralph Lauren. He also had some smaller deals with companies like Gentle Hair Removal and Airweave.

Katie Ledecky has arguably been the most successful female swimmer in recent years and has built a net worth of $4 million. With seven gold medals from the Olympic Games, Katie Ledecky’s rise to fame in the swimming world has afforded her the chance to cash in on her success. The United States reportedly gives each gold medal-winning athlete a bonus of $37,500 for their efforts, so with seven gold medals to her name, she’s received $262,000 just from her Olympic success alone. Ledecky is also sponsored by some big-name brands such as Visa, Adidas, and even the electronics brand Panasonic.

With a net worth of $2 million, Ian Thorpe, or “Torpedo,” as many people in the swimming world call him, has found significant financial gains as a result of his success in the pool. A significant portion of his money came from competition earnings, including when he won three gold medals and two silvers at the 2000 Summer Olympics in Sydney, Australia. Aside from contest winnings, Thorpe has forged relationships with brands that are willing to sponsor his efforts. His chief sponsor throughout his career was Adidas. Their relationship spanned decades. He was also sponsored by The Star, Specsavers, and Optus at different points throughout his career, but Adidas always remained sponsor number one.