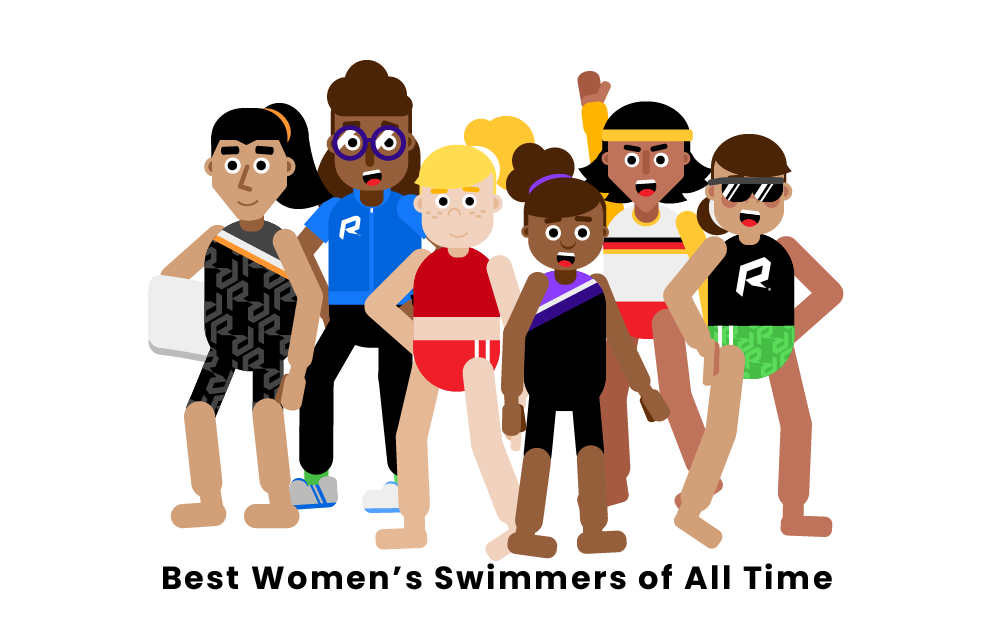 Swimming has long been one of the most popular sports at the Summer Olympics, with thousands of viewers tuning in every four years to track the progress of their favorite athletes as they attempt to win medals in various races. While men’s swimming has given rise to dozens of famed athletes such as Michael Phelps and Ryan Lochte, women’s swimming has proven just as popular and has brought forth its own share of incredibly talented swimmers for audiences to cheer on. Read on to learn about the top six best women’s swimmers of all time.

Who are the best women’s swimmers of all time?

Though she is still a young woman with a long career ahead of her, Katie Ledecky skyrocketed to stardom early in her sport and has set records not only for her youth but for her incredible skills in the swimming pool. Born in 1997 to parents David and Mary Gen Ledecky, Katie Ledecky got her start at swimming when she was only six years old, swimming alongside her elder brother, Michael, who is both a swimmer and a Harvard graduate. Swimming with her brother and for a summer swimming league helped Ledecky hone her skills, and soon she was entering competitions and setting her path towards the Olympics. In the 2012-2013 swimming season, she was named the USOC Sports Woman of the Year at only 15 years old. That same year, she qualified for her first Olympic Games, the 2012 London Games, becoming the youngest athlete on that year’s U.S. Olympic Swimming Team.

Ledecky started off her Olympic career right with a gold medal in the 800-meter freestyle. The following year, Ledecky continued her stellar performance at the Swimming World Championships, winning four gold medals. She improved even further for the 2015 World Championships, winning five golds, and then returned to the Olympics for the 2016 Rio Games, where she won four gold medals in a single Games, as well as one silver. At the 2017 World Championships, Ledecky won another five gold medals and a silver, and in 2019, she added to her medal total with another gold and two silvers for a combined total of 18 World Championship medals. In 2020, Ledecky returned to the Olympics for the Tokyo 2020 Games, winning two more gold medals and two silver. These impressive wins make Ledecky one of the most decorated women’s Olympic swimmers and one of the most decorated athletes overall of all time.

A four-time Olympic gold medallist, Dara Torres has had what is arguably the longest Olympic swimming career of any female swimmer. Her Olympic journey began in 1984, at the age of 17, when she participated in the Los Angeles Summer Games. That year, she won a gold medal in the 4x100 freestyle relay. Torres returned to the Olympics in 1988, winning a silver and a bronze medal in Seoul, South Korea. At the Barcelona 1992 Games, Torres won her second gold, again in the 4x100 freestyle relay.

After the 1992 Games, Torres seemed to end her swimming career, taking a break from the Olympics and pursuing a modeling career, which included the distinction of being the first athlete to appear in Sports Illustrated’s swimsuit issue. She also worked briefly as a commercial spokeswoman for a fitness training program. However, Torres’ love of swimming drew her back to competition in 1998, leading her to the 2000 Sydney Olympics, where she won two gold medals and three bronze. She made a final Olympic appearance in Beijing in 2008, winning three silver medals, which made her one of only three Olympic athletes to have won four or more medals of each type (the others being Takashi Ono and Larisa Latynina).

One of two non-American athletes on our list, Hungarian swimmer Krisztina Egerszegi is known for being the youngest athlete ever to win a gold medal in Olympic swimming. Born in 1974, Egerszegi competed in her first international event in 1987, when she was only thirteen years old. A year later, at fourteen, she entered the Olympic Games in Seoul, South Korea, where she achieved her famous record by winning the gold medal in the 200-meter backstroke and also won a silver in the 100-meters.

Born in 1996, American swimmer Simone Manuel made history in her first-ever Olympic Games at Rio in 2016, as she became the first African American woman to capture an individual Olympic gold medal, successfully winning the 100-meter freestyle event. At the 2017 World Championships, Manuel continued her impressive streak by winning five gold medals and a bronze. She also won a number of collegiate titles while at Stanford University in 2017 and 2018, winning six individual NCAA swimming titles and eight relays over those two years. In 2019, Manuel achieved a great feat by winning the most medals ever won by a female athlete at a single FINA World Championships. Manuel won seven medals that year, four gold and three silver, and also became the first American woman to win the 50-meter freestyle at the World Championships since Amy Van Dyken did so in 1998. She also achieved fame that year by becoming the only American woman to win both the 50 and 100-meter freestyles at the World Championships in the same year. These feats led her to be named the 2019 Female Athlete of the Year.

Manuel returned to the Olympics in 2020, helping Team USA win Olympic bronze in the 400-meter relay. She currently serves as an Ambassador for the USA Swimming Foundation, where she is a champion for greater diversity in swimming.

The second non-American on our list, Australian swimmer Stephanie Rice began her Olympic career in 2008, at the age of 20, when she won an impressive three gold medals at the Beijing Olympic Games. This feat put her in an exclusive club of athletes who had managed to win three golds at a single Olympics. Rice’s two individual golds, in the 200 and 400-meter medley events, also came with world-record-winning times, as did her participation in her third gold, the 400-meter team relay, with the Australians winning by shaving five seconds off of the world-record time in the event. Rice’s incredible success in Beijing led her home country to honor her with the distinction of holding their flag during the Games’ closing ceremonies. Rice’s second Olympic appearance at London in 2012 was nearly forestalled by a necessary shoulder surgery, but despite her recent operation, Rice determinedly made it to the Olympics, where she managed to make it to the finals in both of her events, though she did not medal, finishing in fourth place for the 200-meter individual medley and in sixth place for the 400-meter individual medley.

Who is the greatest women’s swimmer of all time?

American swimmer Katie Ledecky is widely considered to be the greatest women’s swimmer of all time due to the sheer number of medals and world-record times she has managed. Since winning her first gold medal at the 2012 Olympics in London, Ledecky has maintained her top spots at every Olympic Games. Ledecky currently holds three world records, with the fastest times in the 400, 800, and 1500-meter freestyles. In all, she has ten Olympic medals and 18 World Championship medals, making her the undisputed greatest female swimmer of all time.

Who has the most Olympic gold medals in women’s swimming?

Who has the most women’s Aquatics World Championships gold medals?

Pages Related to Top 6 Best Women's Swimmers of All Time