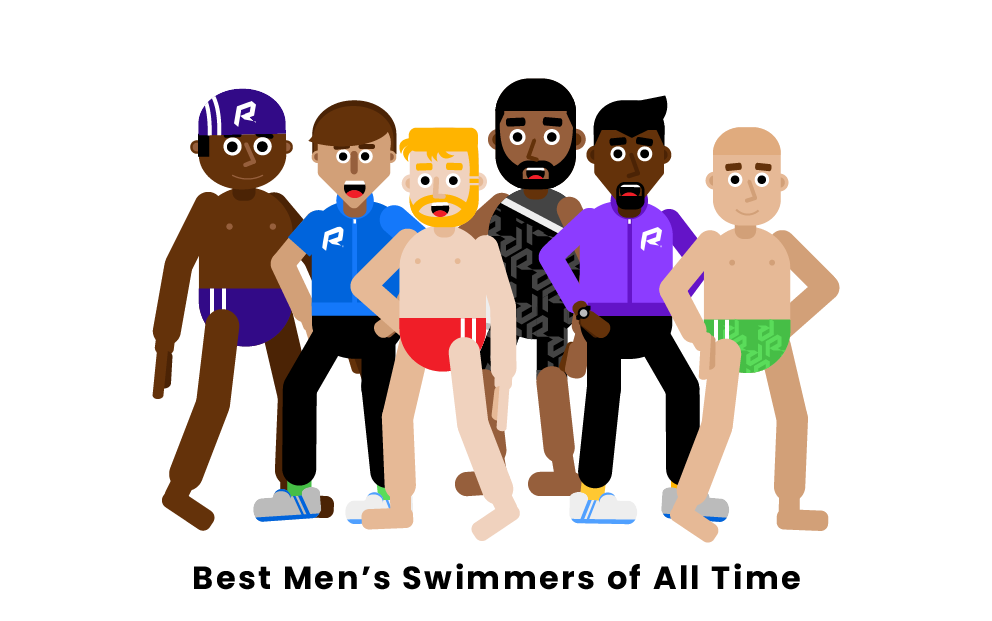 Swimming is a grueling sport that requires countless hours of hard work both in and out of the pool. To make it to the top of the sport requires incredible talent and dedication. This list breaks down the six greatest men’s swimmers of all time.

Who are the best men’s swimmers of all time?

Michael Phelps is considered by many to not only be the greatest men’s swimmer in the history of the sport but also perhaps the greatest Olympian of all time. His 28 total Olympic medals, including 23 gold medals, are incredible numbers that another swimmer may never match. In 2008, Phelps had perhaps the best Olympic performance of all time by winning the gold medal in every event he swam in, a total of eight; in seven of these events, he also broke world records. His versatility and talent combined with incredible dedication made Phelps a true legend in the sport of swimming.

Mark Spitz held the record for the most gold medals in a single Olympics and most career Olympic gold medals for a men’s swimmer before Michael Phelps came along. In 1972, Spitz had an incredible Olympic performance, winning 7 golds, a record that stood for 36 years. Spitz also broke the current world record in each of those seven races in the Munich Games. Overall, Spitz finished with 11 Olympic medals, including nine golds, one silver, and one bronze, which stands as the second-most all-time for a men’s swimmer. Spitz specialized as a sprinter in both freestyle and butterfly events.

Ian Thorpe is the greatest men’s Australian swimmer of all time, which is an impressive feat considering the passion Australia has for swimming. He is also one of just two non-Americans to crack the top six list, an honor he earned by amassing nine career Olympic medals, including five golds, three silvers, and one bronze. Thorpe specialized in the middle distance freestyle events, the 200 and 400-meter races. He also helped guide Australian teams to four Olympic relay medals. He represented his country admirably in the Sydney Games as just a 17 year old in 2000, earning two individual golds that year.

Ryan Lochte became a bit of a controversial figure outside of the pool, but in the water, he is easily one of the greatest men’s swimmers of all time. While the greatness of Michael Phelps often overshadowed him, Lochte cemented his place in swimming history by collecting 12 Olympic medals, including six gold medals, three silvers, and three bronze medals. Lochte was a versatile swimmer, competing in both the individual medley events and the 200-meter freestyle. Lochte also excelled in World Championship events, earning 62 medals in those competitions, including 36 golds.

Matt Biondi established himself as one of the greatest men’s swimmers of all time by becoming one of just three men to win seven medals in one Olympics. He accomplished this feat in the 1988 Games held in Seoul. Biondi was an elite sprinter in both freestyle and butterfly, winning individual medals and helping the United States team win three relay golds. Overall, Biondi won 11 Olympic medals, including eight gold medals, two silvers, and one bronze medal. Biondi was an intense competitor and he used that fire to dominate the sport during an eight-year run from 1984 to 1992.

Who is the greatest men’s swimmer of all time?

Michael Phelps is easily the most accomplished swimmer of all time and one of the greatest individual athletes of all time. His dominance in the Olympics is unmatched, and his peak performance came in the 2008 Olympics in Beijing, where he won 8 gold medals and set 7 world records, the most ever in a single Olympics. His total of 23 Olympic gold medals may never be topped, and he still holds 5 Olympic records. Phelps was a versatile swimmer with skills that had never been seen before.

Who has won the most Olympic gold medals in men’s swimming?

Who holds the most Olympic swimming records?

Pages Related to Top 6 Best Men's Swimmers of All Time