How Much Does A Swimmer Make? 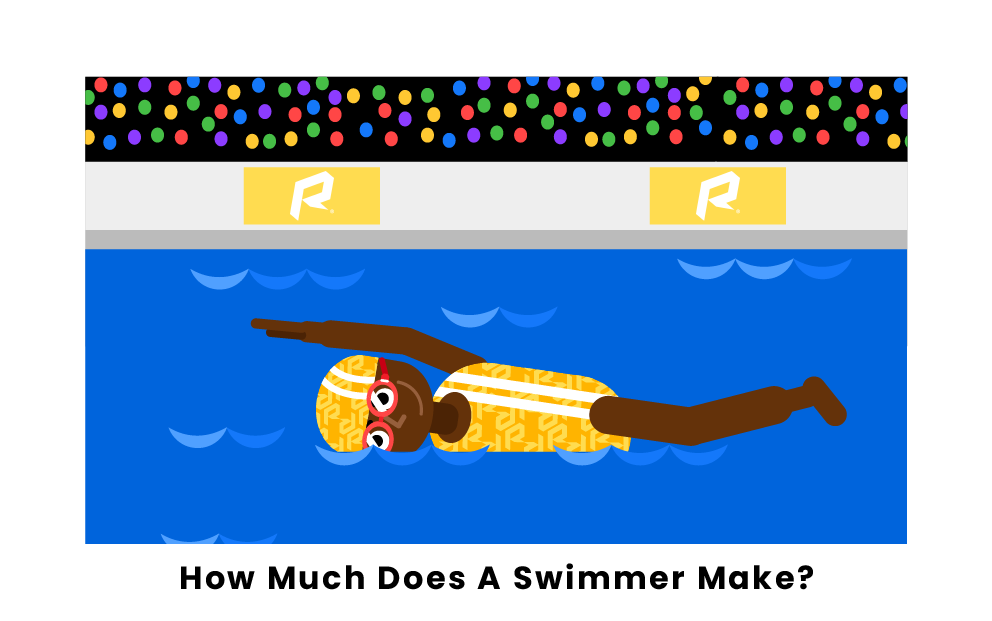 Most professional swimmers are introduced to the sport from a young age because of the availability of public swimming pools in most areas. Due to this, the most prolific swimmers have been training and practicing nearly daily from a young age. All this work often allows them to become prized medalists in the Olympics and other competitions. Despite this, most professional swimmers do not earn a high salary, and most of their income comes from sponsorships and prize earnings.

Only the best of the best earn any salary in the swim ranks, and even then, a baseline salary is quite small for a professional swimmer. In the United States, pro swimmers earn a baseline salary of $40,000 per year, but they must rank in the top 16 in an Olympic event to earn that salary. The United States government pays for this salary through the Athlete Partnership Agreement, and the guidelines apply to less than 100 swimmers in the US. While this is a low salary for professional athletes, many other countries pay their swimmers less generously. Many swimmers only earn a few hundred dollars per month as a stipend, and most of that money goes toward equipment and training expenses.

Recently, a new league, the International Swim League (ISL), was formed; and each swimmer in this league earns a salary and prize money for winning races. In the 2020 season, each swimmer in the league earned a baseline salary of $15,000 per year, which is $1,500 per month for ten months. As with most other swim events and leagues, most of the money earned by the athletes is through prize money, but this baseline salary is paid by the league and swim teams themselves.

Just like any other sport, professional swimmers earn more money as they become more accomplished through the sport. The most famous swimmers are those who have won gold medals in the Olympics; along with fame and national pride, swimmers typically earn a nice payday if they win a gold medal. The country the swimmer competes for will pay out this prize money, and different countries pay dramatically different amounts for their swimmers who win a gold medal. For example, the United Kingdom pays no prize money for any athlete who wins gold, but Singapore pays $1 million. In 2016, Singaporean Joseph Schooling earned this $1 million prize by beating Michael Phelps in the 100m butterfly for Olympic gold in the Rio games.

The United States pays a relatively low price for athletes who win gold in part because so many athletes across many sports win gold for the US. The prize money is $25,000 for any United States athlete who wins Olympic gold, which beats out Germany’s prize of $19,500. Other countries such as Azerbaijan and Thailand give out hefty bonuses for Olympic gold. However, since most swimmers will never come close to winning a gold medal, many other events give out prize money to sustain a swimmer’s earnings.

Besides the Olympics, FINA hosts world swimming championships yearly, with a sizable prize pool for each championship. The 2022 FINA World Swimming Championships were held in Budapest, Hungary and the prize pool for swimmers totaled nearly $3 million. This money is distributed amongst many different events, and a winner of an individual event earns around $20,000, with an extra $10,000 bonus if a swimmer breaks a world record. One swimmer, Caleb Dressel, won $110,000 in the South Korea FINA Championship in 2019. Many other events such as World Cups, European Championships, and World University Championships offer prize pools for winning competitors.

Most swimmers outside the elite and well-known champions do not earn much, if anything, through sponsorships. However, famous swimmers such as Michael Phelps and Katie Ledecky have earned millions through endorsements. In Phelps’s case, he has earned career earnings exceeding $55 million total and has earned a lot of that through many endorsements. For Ledecky, she has earned $7 million through one sponsorship with TYR. While these are examples of the largest sponsorships, most sponsorships only yield the swimmer a few hundred dollars and are limited to social media posts and other small publicity appearances.

Who is the highest-paid swimmer ever?

Michael Phelps is the highest-paid swimmer ever, with career earnings exceeding $55 million. Most of these earnings came through endorsements and prize earnings for winning certain races and gold medals during the Olympics. Phelps won 23 Olympic gold medals in various events throughout his career and is the most decorated Olympian and swimmer of all time. Phelps has earned more than five times more in career earnings than the second-highest paid swimmer of all time, Mark Spitz, who won seven gold medals in the 1972 Olympics.

Who are the highest-paid swimmers?

While Michael Phelps is the highest-paid swimmer of all time, Olympic swimmers such as Mark Spitz, Ryan Lochte, Ian Thorpe, and Diana Nyad have also accumulated $10 million or more in career earnings. Nyad is the highest-paid women's swimmer of all time, as she accumulated $10 million throughout her career as a swimmer and gained publicity through swimming from the Bahamas to Florida. Lochte and Phelps both recently retired from swimming and represented America in multiple Olympic Games.

How much does an Olympic swimmer make?

Olympic swimmers do not make much through their salary alone, and most of their income comes through prize money and endorsements. In the United States, an Olympic swimmer earns a base salary of $40,000 a year and supplements that money through other earnings. In the US, each athlete earns $25,000 for a gold medal along with any prize money. The exact amount made for winning an Olympic gold medal varies by country. During the 2016 Olympics, Joseph Schooling from Singapore earned $1 million in prize money for taking home the gold medal in the 100m butterfly.

Pages Related to How Much Does A Swimmer Make?