SportsSporting EventsGamesActivitiesSurfingIs Surfing an Olympic Sport?Learn To SurfSurfing 101Surfing BasicsSurfing HistorySurfing Terms ListTop 10 Surfing MoviesTop 5 Surfing Video GamesTop 6 Best Men's Surfers of All TimeTop 6 Best Women's Surfers of All TimeTop 6 Richest SurfersWhat Age Should You Start Surfing?What is Surfing?Surfing EquipmentSurfing RulesThe Top 10 Rules Of SurfingWhat Are The Rules And Regulations Of Surfing?What Are The Rules Of Surfing?What Is The Right of Way In Surfing?
Home>Sports>Surfing>Surfing Rules
PreviousNext

What Are The Rules Of Surfing? 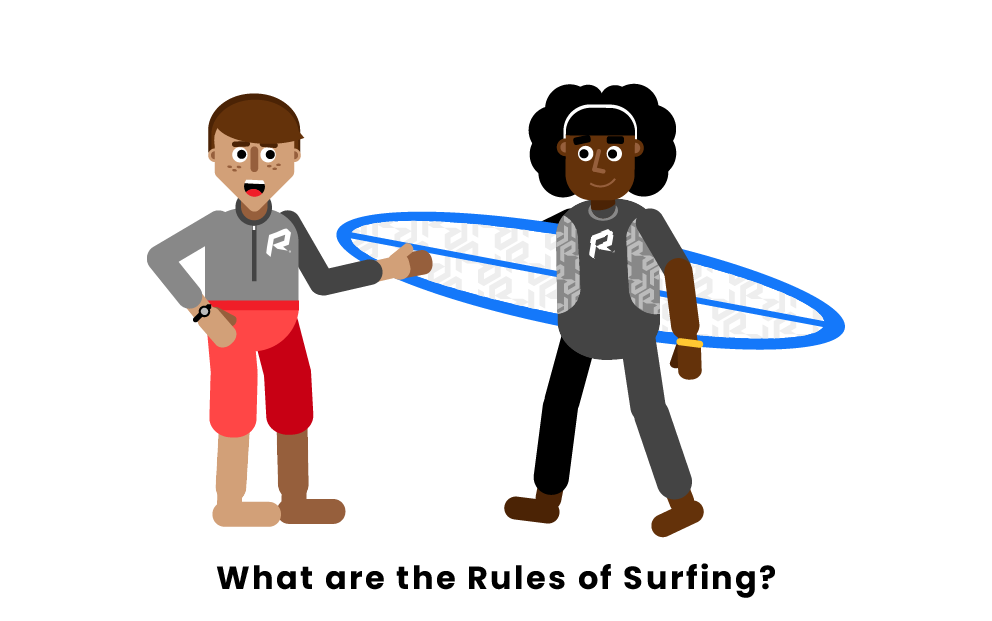 Surfing is a board sport, usually carried out in the ocean, with the object to balance on the board and ride waves.

While many people surf for pleasure, it can also be done professionally in a competitive environment.

How to Earn Points 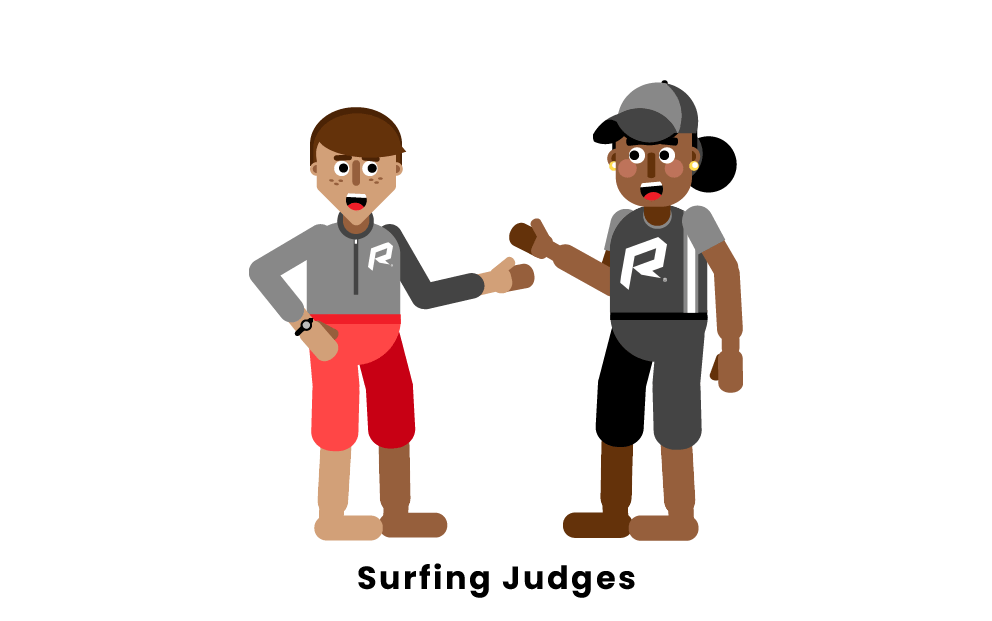 In professional surfing competitions, surfers participate in multiple rounds to try to earn the highest amount of points. Each round is made up of several ‘heats,’ or periods that usually last around 35 minutes. During a heat, between two to four surfers in the competition attempt to score as high as possible on two separate waves. Each wave will be given a score out of 10 points by five judges. To determine the final score for a given wave, the highest and lowest scores from the judges are dropped and the middle three scores are averaged. While there is no limit to the number of waves that can be scored per surfer, only their two highest scored waves are counted per heat. Therefore, the highest score a surfer can score on a heat is 20 points.

A few elements that judges look for when awarding scores to competitors include:

Judges also use a scale from 0-10 points with five point ranges. The table below shows what each score means.

In the first round of a World Surf League (WSL) competition, there are 12 different heats each with three surfers. The surfers that finish first and second in each heat automatically get moved on to the next round (the Round of 32). The bottom finishers in each heat are placed in the elimination round. The elimination round consists of four different heats, each with three surfers. The surfer that places last in each heat is eliminated from the competition while the other two move on to the Round of 32.

In the Round of 32, there are 16 heats of two surfers. These surfers compete head to head and the winner moves on while the loser is eliminated. For the rest of the rounds in the competition (Round of 16, Round of 8, Quarterfinals, Semifinals, and Finals), all of the heats are one vs. one, with the winner continuing on and the loser eliminated. This continues until there is only one surfer left who is the event champion.

Priority is the right of a surfer to take a wave. When waves approach, the surfer that is out the farthest in the lineup and closest to the breaking point of the wave earns priority. Once the surfer with priority catches the wave, the next surfer in the lineup gains priority for the next wave. An additional perk of having priority is the ability to ride a wave that another surfer has already chosen to pursue and force that surfer to leave the wave. Although priority surfers get first pick, another surfer can attempt to ride the same wave as long as they don’t interfere with the ability of the priority surfer to score. 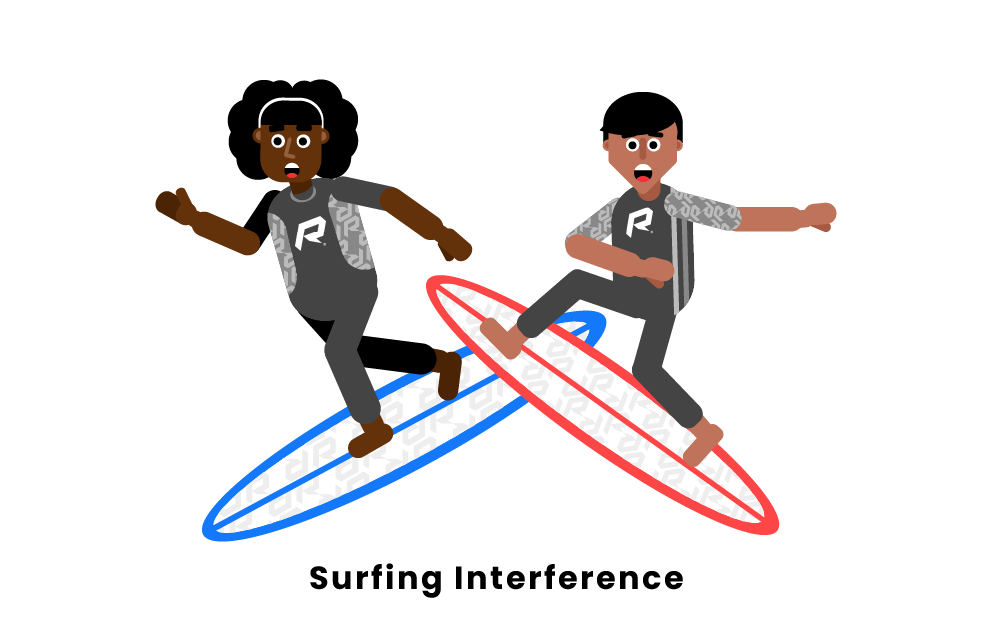 An interference occurs when a surfer intervenes in the scoring opportunity of the surfer with priority. This often causes the priority surfer to lose points or fall off their board. The competitor that interfered is usually penalized by only being awarded a score on their best wave of the heat instead of their best two waves. Therefore, the surfer can only earn a maximum of 10 points instead of 20 points.

Whether surfing professionally or for fun, there are several rules that all surfers should follow. Aside from priority, a general rule of thumb is that there should only be one surfer per wave. It is often seen as disrespectful to ride a wave that another surfer is already in the midst of. Additionally, if a surfer drops in on a wave with another surfer, it can be very dangerous as the two could collide. Another common rule is that surfers should avoid snaking. Snaking occurs when one surfer paddles around another surfer to try to get closer to the peak of a wave. This is often seen as a selfish and impatient gesture because it is seen as budging the line. Instead of snaking, surfers should wait their turn in the lineup for a different wave.

What is a duck dive in surfing?

What is splitting the peak in surfing?

Splitting the peak is when two surfers are on either side of the peak of a wave. The surfer who is closer to the wave’s peak usually has the priority to take the wave but since they are on opposite sides, both surfers can take off on their own side of the wave. In this case, surfers should not cross over the peak because it would interfere with the rider on the other side.

How should a surfer paddle out?

When paddling out in the water, a surfer should try to paddle on the outside of the lineup and waves so they do not get in the way of other surfers. Once the surfer reaches a point past most of the breaking waves, they should then paddle in towards the lineup to prepare to catch a wave of their own. A paddling surfer should always yield to a surfer already riding a wave.

What is a waiting period in surfing?

Pages Related to What Are The Rules Of Surfing?