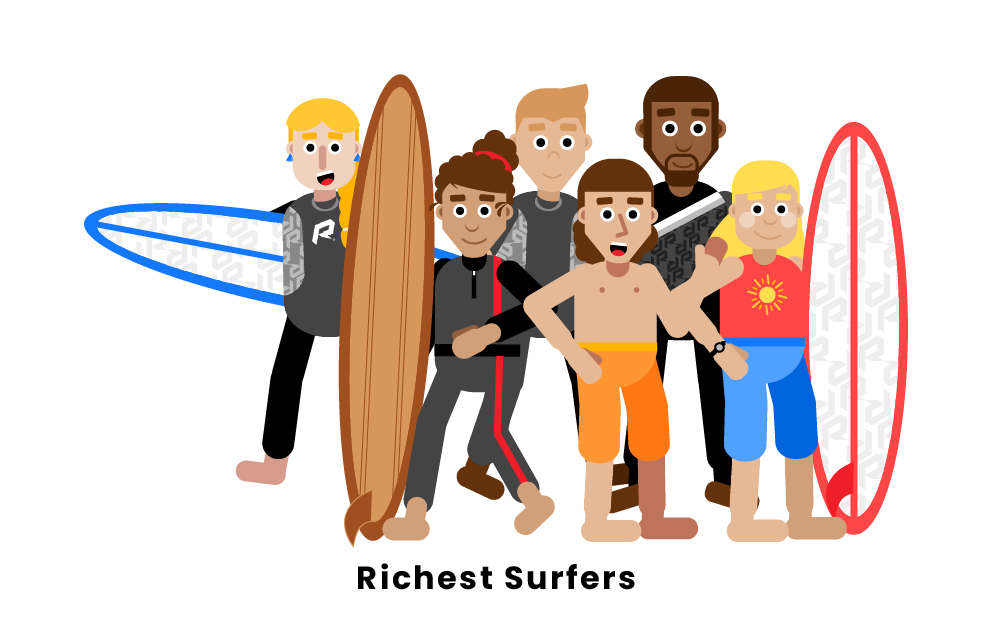 In the hyper-competitive world of surfing, athletes only have a few ways of making money. The two main ways are through prize money from competitions and earnings from sponsorship deals. The world’s most talented and famous surfers are able to build substantial net worths using these methods, among others.

Who are the richest surfers in the world?

With a net worth of $25 million, Kelly Slater tops the list of wealthiest professional surfers. Considered by most of the surfing world to be the greatest professional surfer of all time, Slater has found many different ways to make money. For one, he’s received millions in prize money from contests, such as the $2.2 million he won between 2010 and 2019 from the World Surf League’s Championship Tour. He’s had numerous sponsors over the years, but Slater has also reinvested some of this money into his own ventures. He co-founded a clothing company called Outerknown and developed a private surfing wave pool known as the Surf Ranch.

John John Florence is one of the most successful surfers in recent years, and as such, he has amassed a net worth of $12 million. Florence has found dazzling success in surf competitions in recent years, winning the Championship Tour back-to-back years in 2016 and 2017. This came with loads of prize money, but he also has managed a few very lucrative sponsorships, including one with Hurley. In 2019, he was the highest-paid surfer as he earned just over $5.3 million between contests and sponsorship money. He has recently launched a new brand of his own called Florence Marine X, which has the potential to raise his net worth even higher.

Known as the co-inventor of tow-in surfing, a discipline of surfing that allows athletes to use jet skis to tow each other into giant waves, Laird Hamilton holds a net worth of $10 million. Hamilton, who no longer engages in professional surf contests, had a very lucrative career when he was young. He has made money from contests, sponsorships, and making surf movies. He has also done some acting and modeling in the past. More recently, however, Laird Hamilton pours much of his effort into his wellness brand Laird Superfood. He owns 10% of the company and additionally earns $200k per year for his role as chief innovator.

Celebrated as one of the most stylish surfers in the world, Reynolds has built a net worth of $10 million. Like many of the other surfers on this list, Reynolds earned most of his money through competitions and sponsorships. Some of his sponsors include Vans, the surfboard manufacturer Channel Islands, and Drag Board Co. In his earlier years, he had a very strong relationship with Quiksilver, who signed him when he was just seventeen. In 2011, they re-signed him to a mega-deal of $3 million per year for six years. Reynolds has also helped to co-create a successful surfing/skateboarding lifestyle brand known as Former.

The Australian surfer Mick Fanning has amassed a net worth of $8 million over the course of his career. Much of this money has come from his success in pro surfing’s contest circuit, as well as from big-money sponsorships. His career earnings from contests amount to just under $2.8 million. However, much of Fanning’s wealth has come from his sponsorship deals. In 2018 alone, he made $2.85 million from his deals with companies such as Rip Curl, Red Bull, and Skullcandy. In addition to contests and sponsorships, Fanning has also created his own business venture, Mick Fanning Softboards, which makes surfboards.

With a listed net worth of $3.5 million, Gabriel Medina rounds out the top six of the richest surfers in the world. With three Championship Tour wins to speak of, Medina has found enormous success in the world of surfing competitions. He has also managed to secure some of the most sought-after sponsorships in the sport, with companies such as Rip Curl, Oi, Audi, and Corona paying him to represent their brand. In 2018 alone, Medina managed to pull in $3.5 million between contests and endorsement deals.