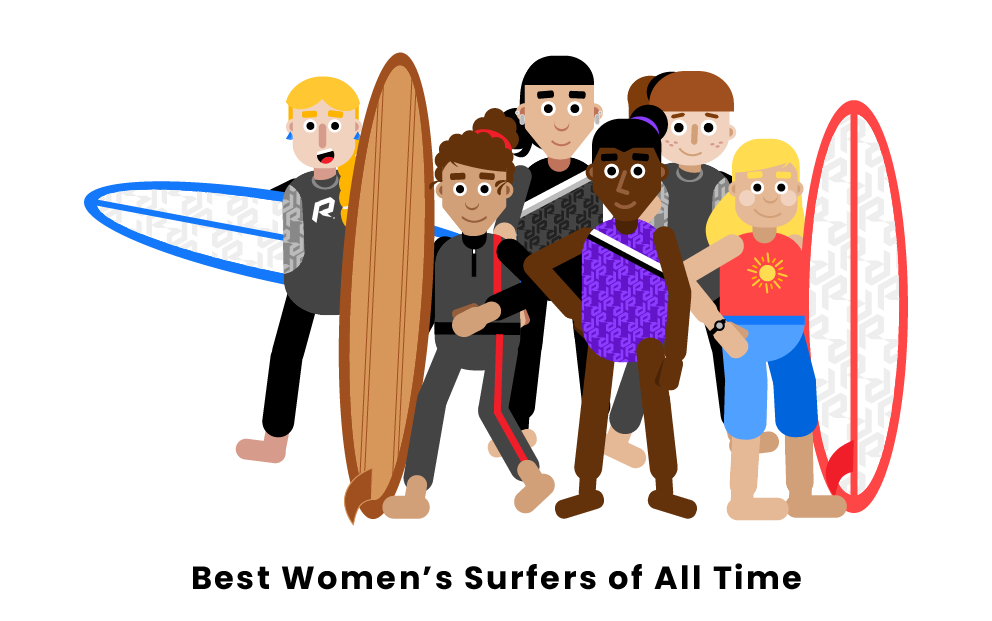 Surfing is a sport that requires both strength and cardio. Surfers use their entire bodies when riding the waves. Women began surfing in the Polynesian Islands in the 1600s and have conquered the waves ever since. However, it wasn’t until 2016 that surfing became an official Olympic sport. Below are some of the top women’s surfers in the history of the sport:

Who are the best women’s surfers of all time?

Layne Beachley is one of the most celebrated and decorated surfers of all time, with seven world titles in nine years. Beachley was born to a single parent and then adopted by Neil and Valerie Beachley. At age 15, she started competing competitively, winning against both women and men. At 16, she became professional. Beachley became quickly known for a feminine style in a sport previously dominated by men. She maintained constant exposure in the media and on TV, which helped legitimize women’s surfing as a sport. In 1993, she won her first World Tour event. She won her first world title in 1998 and continued winning every consecutive year until 2003.

Stephanie Gilmore was born in Murwillumbah, New South Wales, Australia, in 1988. She first got a taste of the waves at age 10 when she stepped on a bodyboard. At age 17, she first competed in world tour events as a wildcard competitor. By 2007, she qualified for the ASP World Tour and captured the world title. She followed this up with world titles in 2008, 2009, 2010, 2012, 2014, and 2018. In 2021, she was on track to pass Layne Beachley by claiming an eighth world title. However, her efforts fell flat as she was eliminated in the opening round by Johanne Defay of France. Today, she is known for her captivating style and is still thought of as one of the greatest of all time.

Botha was born in East London, South Africa, and started surfing at age 13. She is perhaps best known as Australia’s first World Champion and was inducted into the Sport Australia Hall of Fame in 2018. She retired at age 27, and by the end of her surfing career, had won four world titles. The first was in South Africa, and the other three were after she became a citizen of Australia. She is known for her style, which mixes both power and femininity. Like many female surfers, she competed and dominated against women and men alike. At age 27, she was led to retirement after a series of injuries kept her from the waves.

When Lisa Anderson’s parents told her they didn’t approve of her surfing aspirations, she traveled from Ormond Beach, Florida, to Huntington Beach, California, at just age 16. She began training with professional surfers, and her achievements in California landed her an invitation to the World Amateur Championships in Cornwall in 1986. She obtained her first sponsorship deal with Quicksilver in 1992 and would later go on to win four world titles. After the birth of her second son in 2001 (and dealing with multiple injuries), she retired and became a brand ambassador for the surf, snowboard, and fitness brand, Roxy.

Frieda Zamba gained pro status by accident at the young age of 16 when she won an event at Cocoa Beach near her hometown of Flagler Beach, Florida. At only age 17, she became the youngest woman ever to win a world tour event when she won the Mazda Surfsport Pro competition in 1982. She won four world championships in her career, starting with the first in 1984. This win made her the youngest person ever to win the world title, at only 19 years old. She followed this title with world title wins in 1985 and 1986. She won her final world title in 1988. Zamba is not only known for being the youngest world titleholder ever, but also for employing radical, powerful tactics that were previously only seen in men’s surfing.

Hamilton was born in Hawaii and started surfing when she was seven. She won her first competition, the Rell Sunn Menehue, when she was only eight years old. By age 12, she had won the Open Women’s Division of the NSSA National Championships. She was attacked by a fourteen-foot tiger shark at age 13 in 2003. She lost 60% of her blood in the attack but was back surfing within a month. Hamilton is known for her tenacity, resilience, and incredible skill. She published a book about her story, which was turned into a feature film titled, “Soul Surfer” in 2011.

Who is the greatest female surfer of all time?

Surf aficionados typically reach a crossroads when asked this question. Some might argue that Layne Beachley is the greatest female surfer of all time. The Australian native has won seven World Surf League Women’s Championship tours. She was the first to do so. However, another talented woman surfer, Australian Stephanie Gilmore has tied that record and almost passed it in 2021. Gilmore’s last world title was in 2018, and she is still competing today. Ultimately, the title of greatest female surfer is a tie between Beachley and Gilmore.

Who holds the record for the largest wave rode by a female surfer?

Maya Gabeira from Brazil currently holds the record for the largest wave ever surfed by a female surfer at 73.5 feet or 22.4 meters. She broke her own record set in 2018 on February 11, 2020, in Praia do Norte, Portugal, the same place she had set it previously. She was recorded conquering the wave at the WSL Nazare Tow Surfing Challenge. The World Surf League later claimed Gabeira was the winner of the XXL Biggest Wave Award. The achievement was later authenticated by the Red Bull Big Wave Award.

Who has won the most World Surf League Women’s Championship Tours?

Currently, female surfers Stephanie Gilmore and Layne Beachley are tied for the most World Surf League Women’s Championship Tour victories at seven each. Stephanie Gilmore was poised to pass Layne Beachley’s record in 2021 but was eliminated in the opening round by Johanne Defay of France. Carissa Moore from Hawaii currently holds five World Surf League Women’s Championship Tour titles. The first woman surfer to win eight world titles is still yet to be seen.

Pages Related to Top 6 Best Women's Surfers of All Time