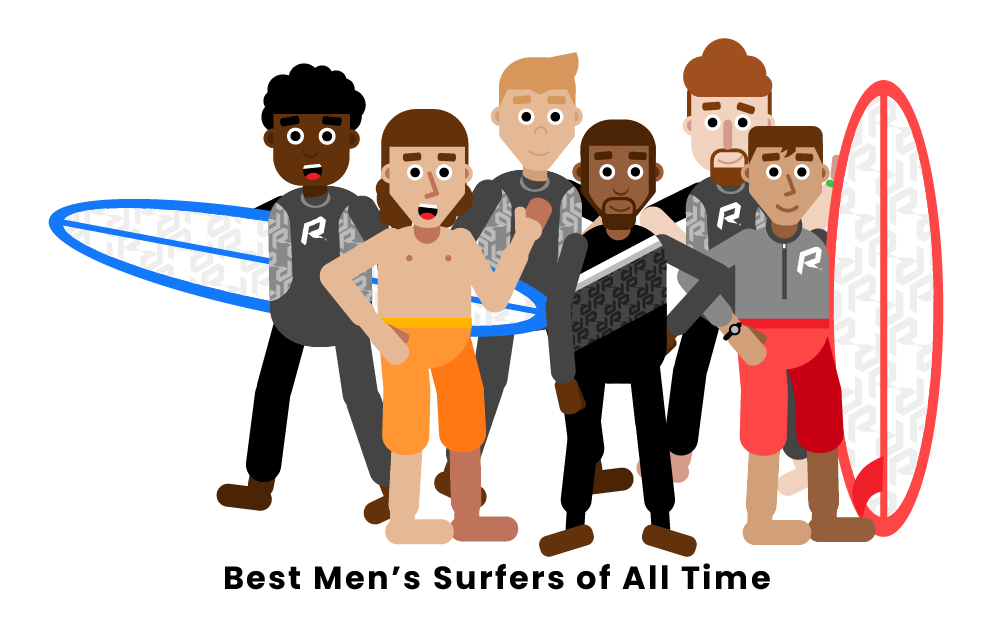 The art of surfing has been around for generations and passed down through many different cultures, evolving into the sport that we know today. Through the years, countless surfers have adopted their own styles of riding waves, with a few truly mastering their craft and proving to be the best of all time. Here are the top six best men’s surfers of all time.

Who are the top 6 best men’s surfers of all time?

Kelly Slater is widely considered to be the best men’s surfer of all time. Slater began surfing professionally in 1990 and quickly became a phenomenon, winning his first World Title in 1992 at only 20 years old. He is also the youngest surfer to win a National Championship in men’s history. Slater continued to dominate, winning five straight World Surf League Championships between 1994 and 1998 and breaking the record of four straight titles previously held by Mark Richards. He stepped away from the World Tour in 1999 but couldn’t stay away, rejoining in 2002, where he found more success, winning the World Title in both 2005 and 2006. In 2011, Slater claimed his most recent and 11th World Title. He continues to compete professionally today.

Shaun Tomson is considered to be one of the most influential surfers in men’s history. Tomson grew up in South Africa and began surfing at the age of 10. Only four years later, he won the Gunston 500, a large surfing competition in his hometown of Durban. In 1976, Tomson joined the World Championship Tour during its first year and was the second surfer to win the tournament the following year. He quickly became well-known for his barrel riding and was the first surfer, along with Mark Richards, to ride a double-barrel wave caught on film. Tomson retired from professional surfing in 1990 but continued to have an impact on the surfing community, running several clothing brands, publishing his own self-help book, and making public appearances where he gave motivational speeches.

Andy Irons is another one of the greatest surfers of all time. Born and raised on the Hawaiian island of Kaui, Irons began surfing at a young age alongside his brother Bruce. In 1995, he began to establish himself as a competitive surfer, winning the National Amateur title. Shortly after joining the professional landscape, Irons began to struggle with the intense lifestyle filled with traveling and constant media attention. With the support of his friends and family, he made a strong comeback to the World Championship Tour and won an impressive three consecutive World Titles from 2002 to 2004. Only three other surfers have won as many World Titles, including legends Kelly Slater, Mark Richards, and Tom Curren. On November 10, 2010, Irons passed away while traveling home to Kaui.

Mark Richards is one the most decorated men’s surfers in history, alongside Kelly Slater. Richards began surfing at age six and quickly developed his skills, becoming one of the best young surfers in Australia and earning a spot on the National Team for the Amateur World Championship in 1972. He was very talented at shaping surfboards and used this gift to his advantage, surfing on his unique boards to help him win four straight World Championships from 1979 to 1982. Richards became the first professional surfer to win multiple titles before leaving the World Tour. He returned to the tour in 2001 but competed in the Master ranks, winning the title for his age group at 44 years old.

Tom Carroll is another one of the most decorated men’s surfers of all time. Carroll grew up surfing in Australia and quickly made himself known, winning the Australian Junior Title in 1978 along with the Pro Juniors in both 1977 and 1980. In 1979, he joined the IPS World Tour and made it all the way to the Pipe Masters finals, where he finished 24th. The next few years, Carroll continued to climb in world rankings before winning his first World Title in 1983, becoming the first goofy foot surfer to win a World Title. The following year, he found more success, winning another World Title along with the Surfer Poll, proving his popularity among fans.

Mick Fanning is known for his high-speed, powerful style of surfing. While his speed propelled him to the top of the surfing realm, Fanning faced many obstacles along the way, including the passing of two of his brothers, a serious hamstring injury, and even a shark attack on live television. Despite these challenges, he became one of the best Australian surfers of all time, competing for 17 years on the World Championship Tour from 2001 to 2018. During his years on the tour, Fanning accumulated 22 career wins, finished in the top five 11 times, and won three World Titles.

Who is the greatest men’s surfer of all time?

Kelly Slater is the greatest men’s surfer of all time. At only 11 years old, Slater began winning surfing championships, and began surfing professionally at age 18. In 1991, he was awarded Rookie of the Year before winning several World Titles in 1992, 1994, 1995, 1996, and 1999. Following his series of championships, Slater took a break from the tour before returning in 2002, where he broke countless professional surfing records and collected 11 World Titles.

Who rode the largest wave ever surfed?

Who has won the most men’s World Surf League Championship Tours?

Kelly Slater has won the most men’s World Surf League Championship Tours with a total of 11 wins. Slater is the youngest and oldest men’s surfer to win a World Title, winning his first title at the age of 20 in 1992 and his latest at age 39 in 2011. Between those years, he broke Mark Richards’ record by winning five consecutive World Championships from 1993 to 1998. Richards trails Slater for the most World Titles of all time with four titles.

Pages Related to Top 6 Best Men's Surfers of All Time