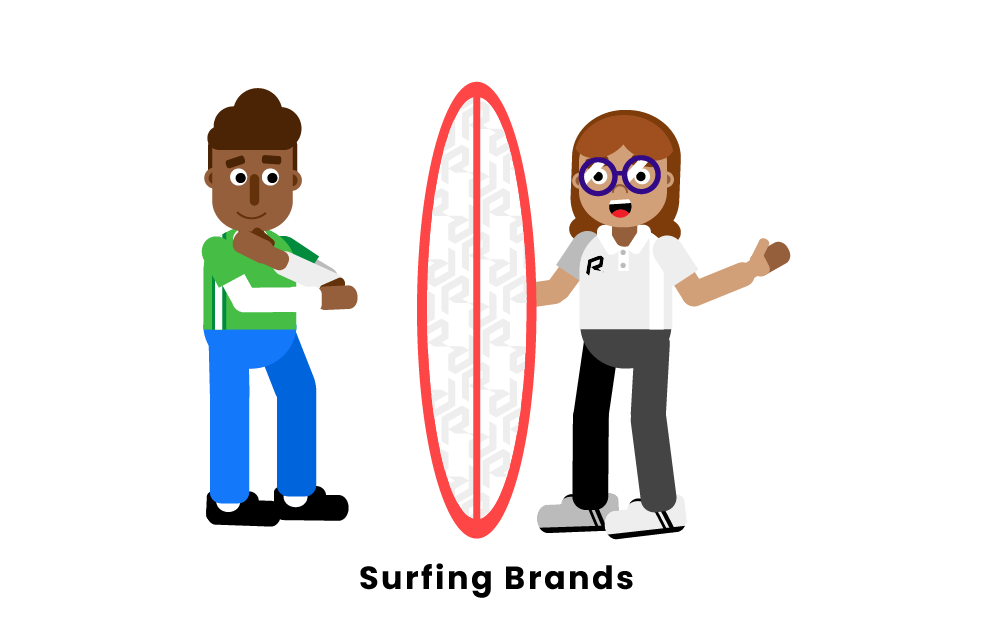 What are the most popular surfing brands?

With a recent surgence, Hurley has become a powerhouse in surfing. Hurley sponsors some of the biggest surfers in the world including Kai Lenny, Filipe Toledo, Julian Wilson, Kohole Andino, Koa Smith, and Carissa Moore (Current Women's World Champion). These surfers dominate the Men and Women's Championship Tour, Big Wave Tour, and overall surfing culture. Hurley produces everyday wear (t-shirts, hoodies, pants, jackets, etc.), surf apparel (boardshorts, rash guards, wetsuits, etc), and other accessories for surfing. Bob Hurley began the brand while living in Costa Mesa, California in 1979. Originally, Hurley was known for the surfboards they shaped. The brand did not begin producing clothing and surf apparel until 1999. Hurley has become one of the most well known surf brands and will continue to attract surf fans everywhere. Hurley has won the "Boardshort of the Year" award four years in a row.

Rip Curl was created in 1969 between two surfing friends Doug Warbrick and Brian Singer. The two friends first created the brand in Torquay, Victoria, Australia with the goal of shaping surfboards. When a third friend Alan Green joined the team, they began producing wetsuits to compliment the surfboards. From this point, Rip Curl took off and has been a prominent surf brand since. They have since introduced all kinds of surf and beach wear products, they even have snow gear too. Their top products include boardshorts, wetsuits, and other swimwear. Rip Curl has become an international brand. Rip Curl sponsors some of the world's best surfers: Legend Mick Fanning, Tyler Wright, Gabriel Medina, Bethany Hamilton, Owen Wright, and Conner Coffin are just a few. This historical brand has been at the front of surfing for decades and does not appear to be slowing down any time soon.

One of the biggest and respectable surf brands is Billabong. Beginning in 1973 on Australia's Gold Coast, 2 determined, avid surfer friends set out to create durable boardshorts. The brand first exported abroad in the 1980s, selling in California, Japan, Europe, and New Zealand. With surf legends Wayne Bartholomet, Joe Engel, and others at the brands' side, Billabong quickly gained credibility. As they have grown, Billabong has purchased many successful companies. They now own huge brands such as Quiksilver, DC, RVCA, XCEL, Sector 9, and Honolua Surf Co. Billabong sponsors many talented and famous professional surfers. Some Billabong athletes include current World Champion Italo Ferreira, Griffin Colapinto, Jack Freestone, Courtney Conlogue, and Alessa Quizon. Billabong's influence on surfing around the world is obvious. Their good quality products and positive vibes will keep them in the surfing world for years to come.

O'Neill is the "original California surf, snow, and lifestyle brand." The brand was originally based out of San Francisco, California, in 1952. However, by the end of decade, founder Jack O'Neill moved the brand down to the surf town of Santa Cruz, CA. The company has always been focused on pushing the limits of surf and innovation. The O'Neill brand can be credited for inventing the first neoprene wetsuit, rash guard, board leash, and stitchless boardshorts. This is one of the original American surf brands and is an extremely reliable brand. Although their focus is in surf and watersports, O'Neill also takes pride in their snow and lifestyle apparel. Jordy Smith, Soli Bailey, Imogen Caldwell, and Russell Bierke are among O'Neill's sponsored surfers. O'Neill is a brand to watch as they are constantly looking to expand and innovate.

Volcom is a skate, surf, snow, and lifestyle brand. Volcom started as an apparel brand in 1991, founded by 2 friends. They aimed to make clothing for surfers and snowboarders. When the brand first started, they only produced T-shirts. However, over time they have evolved. They now produce all types of clothing, apparel, and accessories. Volcom wanted to be a trustworthy and unique business. They did not want to get purchased by a large company and lose their credibility as a local shop. Volcom has ended up as one of the largest action sports brands in the world while still maintaining that credibility. Volcom is famous for the "Volcom House" positioned on the North Shore of Hawaii directly across the beach from the Banzai Pipeline, the world's most famous waves. Volcom athletes, along with others at times, are allowed to stay at the house.They sponsor some of the top athletes in the world including Yago Dora, Ryan Burch, Arthur Lonog, and Coco Ho.

Vans began in Anaheim, California as a skateboard shoe company in 1966. Although Vans remains as one of the leading shoe companies in the U.S, they have added many categories to their brand. Vans sells products in skate, snow, surf, and lifestyle. Vans entered surfing in 1997 when they put on the Vans Triple Crown of Surfing. This three part competition is still one of the biggest events of surfing to this day. With stops in historical surf sports Hale'iwa, Sunset Beach and the Banzai Pipeline, this event brings the best surfers in the world to one location. In recent years, Vans has increased their presence in surfing with sponsorships and new products. Sponsored athletes have begun debuting Vans' wetsuits, rash guards, and booties. These products have not been released to the public yet. Vans has accumulated quite the list of athletes on their team including Nathan Florence, Michael February, Leila Hurst, and Dane Reynolds. Vans is still growing as a surf brand and is set to take off with the release of their new products.

Founded in 1973, Quiksilver was created as a boardshort company in Torquay, Victoria, Australia. Quickly their reputation grew and their shorts were being demanded all over Australia. Soon, in 1976, Quiksliver opened a new branch "Quiksilver USA." By 1990 Quiksilver had diversified to nearly every major market in the world. Quiksilver has remained as one of the most popular boardshort brands since their founding. Since then they have increasingly expanded their brand. Wetsuits, rash vests/shirts, lifestyle apparel, and other accessories are now a part of their brand. Quiksilver is easily one of the top brands in surfing. They sponsored the greatest competition surfer, Kelly Slater, for the majority of his career until he created his own brand. Their current team features standouts including Jeremy Flores, Kanoa Igarishi, Mikey Wright, Ezekiel Lau, and Koa Rothman to name a few. Quiksilver's women's counterpart, Roxy, is also a successful sister of the brand.

Pronounced "REW-KA," RVCA was first developed with the "V" and "A" symbolizing the balance of opposites and how they coexist. RVCA was originally founded as a lifestyle brand that aimed to create clothes that were a little bit different from other companies. A relatively young company, founded in 1999, has quietly become one of surfing's most influential. They have claimed some of the best surfing talent in the world, sponsoring Makua Rothman, Landon McNamara, and Sage Erickson. Along with their lifestyle apparel, they have begun producing surf apparel as well. Their sponsored athletes have shown off their RVCA wetsuits, but they have not been released yet. As of right now RVCA has wetsuit jackets, rash guards, and other surfing accessories. RVCA is different because their brand image is not based on surfing. They are a lifestyle brand that has since adopted surfing. This may present them with new ideas or takes that are not yet made by other brands.

Roxy is the sister brand to Quicksilver. Roxy is on this list because they are one of the only surf brands dedicated solely to women. Not only that, but they are also one of the most popular brands in surfing. Founded in 1990, Roxy was born in the water, initially just as a swim line. Since then Roxy has begun producing snow gear and a much stronger variety in surfing. They put out wetsuits, rash guards, surf jackets, and surf booties for women. Stephanie Gilmore, Lisa Anderson, Kella Moniz, and Monyca Eleogram are some of the brands most well known riders. Roxy sponsors some Womens' Championship Tour events as well.

Is Surfing an Olympic Sport?Top 5 Surfing Video GamesWhat Is The Right of Way In Surfing?
SurfingSurfing Equipment ListWhat Is A Surfboard Used For In Surfing?
PreviousNext