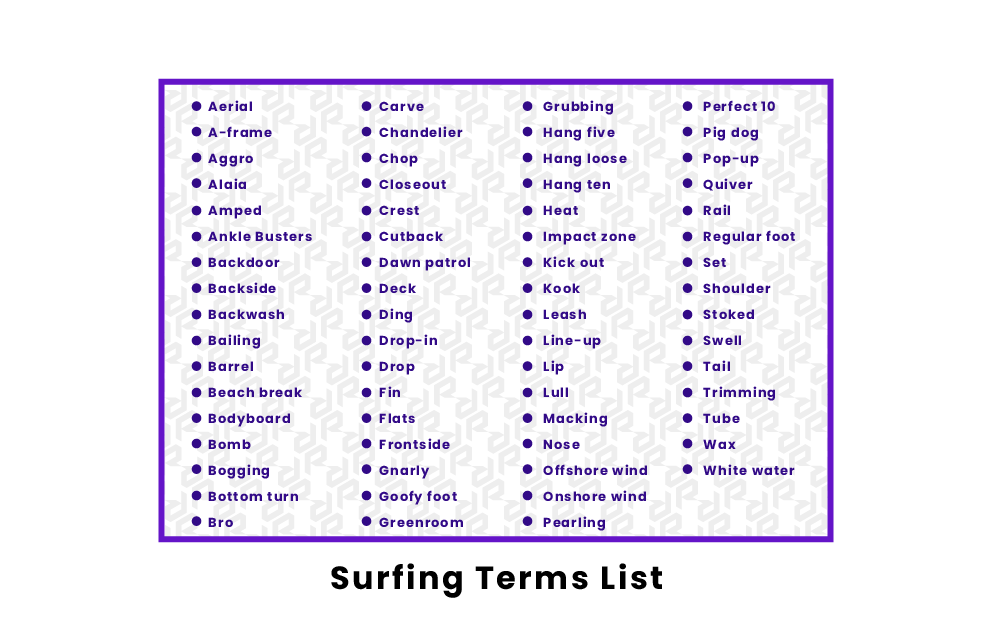 Surfing culture is full of terms, names, expressions, and technical words. Surfer slang has become popularized by movies and television shows to the point where some surfing expressions have found their way into the mainstream lexicon. But to those unfamiliar with the sport, surfing lingo may seem like a foreign language. Here are many of the commonly used terms and expressions in the surfing community.

Aerial: A maneuver in which a surfer hits the crest of a wave and flies through the air. This move is highly advanced and requires surfing experience and physical ability to perform.A-frame: A wave shaped like an inverted ‘V’ that breaks left and right equally. Also known as split peaks, A-frame waves give surfers the opportunity to choose either the left or right shoulder to surf.

Alaia: A surfboard made of wood used by Hawaiians in the late 19th century.

Amped: Surfers commonly use this phrase to describe a feeling of excitement.

Ankle Busters: Waves that are too small to ride properly.

Backdoor: A maneuver in which a surfer pulls into the hollow section of a wave from behind its peak. The hollow section is known as the curl of the wave and is shaped like a tube or barrel.

Backside: When a surfer rides facing away from the wave.

Backwash: When a wave sweeps onto the beach and back into the ocean, sometimes colliding with incoming waves.

Bailing: An evasive maneuver in which the surfer jumps off the board to avoid getting caught inside a wave or wiping out.

Barrel: Shaped like a tube, this is the hollow part of the wave when it is breaking. Riding the inside of the barrel is one of the most sought after things in surfing.

Beach break: The area where the waves break over the sandbars.

Bodyboard: Also known as a belly board, this is a small board used for riding waves while lying down on your stomach.

Bomb: A massive wave. Successfully riding the barrel of a bomb is exciting for surfers, but it can be challenging to avoid getting engulfed in a wave of this size.

Bogging: This occurs when a surfer’s weight is shifted too far back on the surfboard and the board’s nose lifts up out of the water.

Bottom turn: A maneuver in which a surfer turns at the bottom of the wave. This is a very important move that sets the tone for the ride.

Bro: Surfers commonly use this expression to describe their friends and fellow surfers. A bro can be either male or female.

Carve: A sharp turn on the face of a wave. Carves are powerful 180-degree turns that require the gradual application of pressure on the surfboard by the toes and heels. Carves are best performed on fast-moving waves that have wide-open sections.

Chandelier: Water falling at the opening of a barrel, threatening the surfer currently riding the inside the tube. A chandelier indicates that the barrel is about to close and the wave is about to crash.

Chop: Wave conditions that are rough due to strong winds or currents.

Closeout: When a wave breaks suddenly and all at once with no shape or shoulder.

Crest: Also known as the peak, this is the highest point of a wave. The crest is the first part of the wave that breaks.

Cutback: A maneuver performed on the flats or in the shoulder of a wave to change direction and return to the surf line.

Dawn patrol: Going surfing early in the morning, usually at or just before sunrise. This is done in part to avoid crowded beaches and have more space out on the water.

Deck: The top of a surfboard.

Ding: A crack, hole, or fracture in a surfboard.

Drop-in: To get in the way of a surfer who is already riding a wave. This is also known as cutting off, stealing a wave, or snaking.

Drop: This is the first part of the ride and occurs the moment after padding in, standing up on the board, and going down the face of the wave.

Fin: A hydrofoil attached to the tail of surfboards to improve directional stability and control through foot steering.

Flats: Also known as the shoulder, this is the horizontal part of a breaking wave.

Frontside: When a surfer rides facing the wave.

Gnarly: This is a versatile expression commonly used by surfers to describe a person, situation, or occurrence that is either exciting, cool, dangerous, challenging, bad, or even gross. The term ‘gnarly’ can be used in a variety of situations, but is mainly used to highlight a big wave or an extreme surf stunt.

Goofy foot: A surfing technique in which the surfer rides with their right leg forward.

Greenroom: The inside of a barrel.

Grubbing: Falling off the board while surfing.

Hang five: Riding a surfboard with one foot placed on the nose of the board and all five toes hanging off the front of the board.

Heat: A competitive period held in surf contests. Heats are typically made up of two to four surfers who have twenty to thirty minutes to catch the best waves possible. Every wave they ride is rated by a panel of judges. The surfer’s total score at the end of the heat determines if they move onto the next round.

Impact zone: Also known as the pit, this is the area where the lip of the wave crashes down onto flat water. Surfers make an effort to avoid getting caught in the impact zone because this is where most of the wave’s power is located.

Kick out: A maneuver performed at the end of a wave to exit it.

Kook: An inexperienced surfer who is not very good at the sport.

Leash: The cord that attaches a surfer to the surfboard. The leash prevents the surfer from losing their board in the water.

Line-up: Located just behind the breaking zone, this is the area in the ocean where surfers line up to catch waves.

Lip: The curling part of a wave that can be seen at the crest right before the wave breaks. Most of the wave’s power is located in the lip.

Lull: Time between wave sets in which there are no breaking waves.

Macking: When the surf is extremely intense and there are huge, powerful waves breaking.

Nose: The front part of the surfboard.

Offshore wind: Winds blowing from the shore towards the ocean. This type of wind is good for surfing because it holds the curl line and smooths the face of the wave.

Onshore wind: Winds blowing from the ocean towards the shore. This type of wind is bad for surfing because it destroys the quality of the waves.

Pearling: This occurs when the surfer’s weight is shifted too far forward on the board and the nose of the board dives beneath the water.

Perfect 10: When a surfer receives a perfect score for a wave they ride during a surfing competition.

Pig dog: A maneuver in which the surfer grabs the rails of their board while inside the barrel of a wave. The pig dog helps surfers tuck themselves into the small eye of a barrel while also gaining more control and stability.

Pop-up: A maneuver in which the surfer rises from their stomach to stand up on their board. This is performed when the surfer is about to take off on a wave.

Quiver: The collection of boards owned by a surfer.

Rail: The edge of a surfboard.

Regular foot: A surfing technique in which the surfer rides with their left foot forward.

Set: A series of waves approaching the lineup.

Shoulder: Also known as the face, this is the part of the wave that has not broken yet. Surfers ride from the breaking area of the wave toward the shoulder.

Stoked: This term is commonly used by surfers to express excitement or enthusiasm.

Tail: The back end of a surfboard.

Trimming: Finding the ideal surf line on the face of a wave.

Tube: Also known as the barrel, this is the hollow interior of a wave that forms as it is about to break.

Wax: A product applied to surfboard decks in order to increase traction.

White water: When a wave breaks on to flat water, it transforms into white water. This is also referred to as foam or soup.