How Many Super Bowls Have The Lions Won? 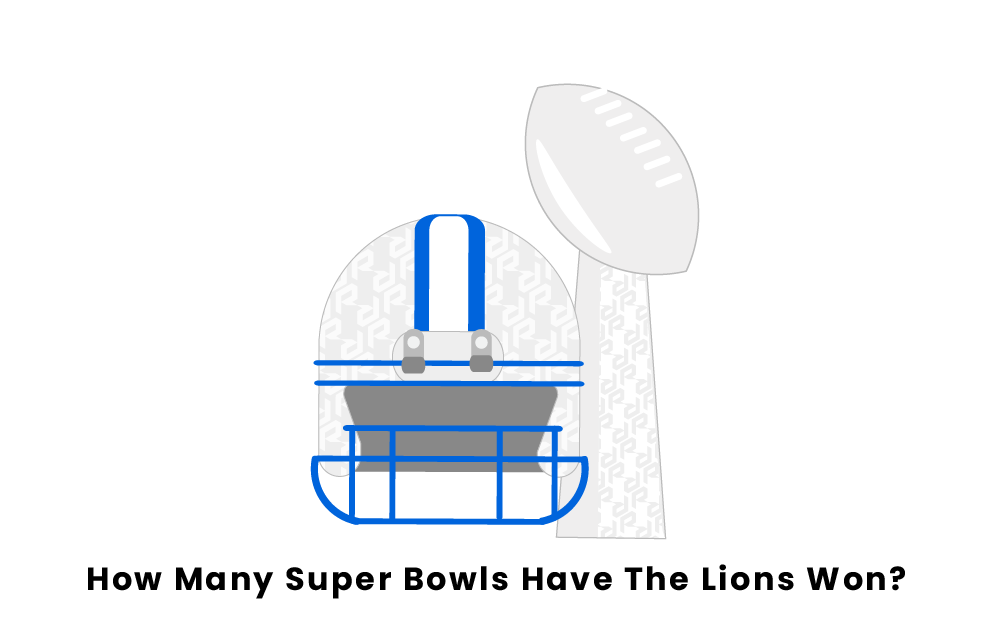 The Super Bowl was created in 1966 when the NFL and AFL merged to decide a champion of football. In the 56-year history of the game, the league has seen 20 different teams come out on top, but 12 teams in the NFL have never won a Super Bowl.

The Detroit Lions are one of these teams. Not only have the Lions never won a Super Bowl, they have never even appeared in one. They are one of four current teams to never appear in the Super Bowl, but that doesn’t mean the franchise has been unsuccessful forever. Read on below to learn about the history of the Lions and their championship resume.

Though the Lions have never won a Super Bowl, there are four teams in the history of the franchise that can call themselves champions. The Super Bowl was formed in 1966 when the National Football League (NFL) and American Football League (AFL) merged into the league we know today. Before then, championships would be decided separately for each league. Detroit played in the NFL and was a well-respected franchise. After relocating from Portsmouth, Ohio, the Lions won their first championship in 1935, in just their second year in Detroit. In the fifties, Detroit was arguably the most dominant team in the NFL, winning three championships in 1952, 1953, and 1957. The Lions are one of 11 teams in football history to win three championships in a decade, a testament to their prowess during the early days of professional football.

After their last championship win in 1957, the Lions began to fall on hard times. From 1958 to 1981, Detroit only qualified for the playoffs once, by far the fewest of any team in that time span. While this stat may not paint a pretty picture for the Lions, they were far from terrible during this time. Their teams were known for being stuck in mediocrity, often finishing around a .500 record but never being able to get over the hump. They did make a couple of playoff appearances in the early eighties, but they had fallen back to the bottom of their division by the end of the decade.

The one advantage of Detroit finishing in the bottom of the standings was they accumulated a lot of high draft picks. In 1989, they hit a home run when they drafted running back Barry Sanders. Sanders would go on to be named a Pro Bowler in each of his ten seasons in the league, helping spearhead a reinvigoration of the franchise. Detroit made the playoffs five times in the nineties with Sanders, including a trip to the NFC Championship Game in 1991. However, from 1992 to the start of the new millennium, Detroit could never make it past the first round of the playoffs.

Since 2000, the Lions have perennially been one of the worst teams in the NFL. In 2008 they recorded an 0-16 season, the first team to ever do so in NFL or AFL history. They did make the playoffs three times in the 2010s behind star quarterback Matthew Stafford, but they were unable to win a game in any of their postseason appearances.

When was the last time the Lions won the Super Bowl?

When was the Lions first Super Bowl win?

Though the Lions never won a Super Bowl, they do have four NFL championships under their belt. Their first championship win came in 1935, only the second year the franchise was located in Detroit. Previously, the franchise had played in Portsmouth, Ohio, under the name the Spartans. During their short-lived tenure, the Spartans were moderately successful, playing in the first playoff game in league history in 1932.

What Lions players have been Super Bowl MVP?

No Detroit Lions player has ever won a Super Bowl MVP. However, in 1997 running back Barry Sanders became the first and only Lions player to win the NFL MVP Award. Sanders is one of the best running backs in NFL history, reaching the Pro Bowl in every one of his ten seasons. In addition, Sanders led the league in rushing four times and was known as an extremely shifty runner who could make defenders miss at will.

Pages Related to How Many Super Bowls Have The Lions Won?