How Many Super Bowls Have The Cowboys Won? 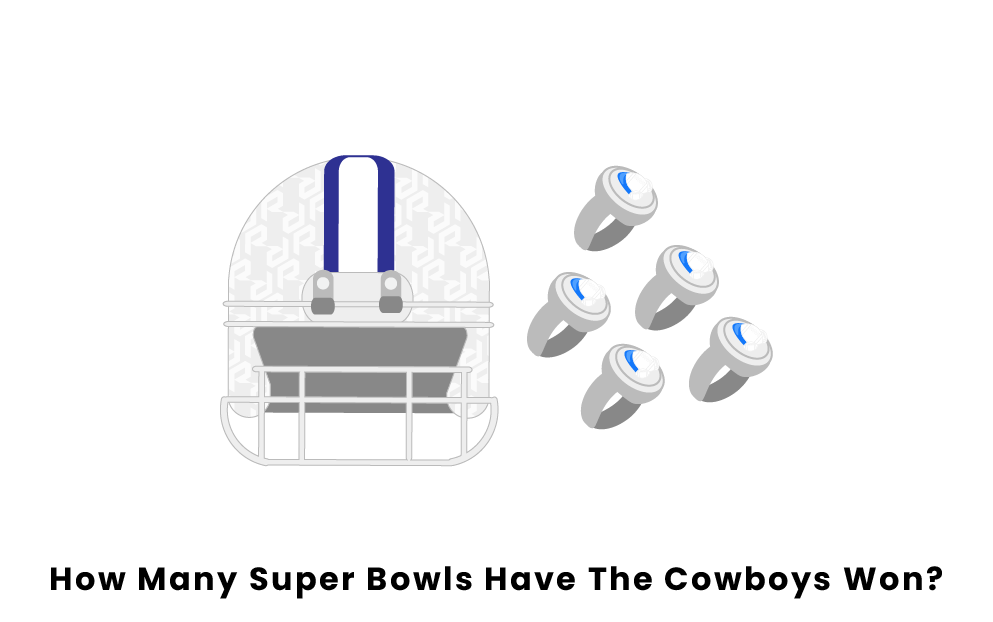 The Dallas Cowboys, also known as "America's Team," have been one of the most successful NFL franchises of all time. They have built a global brand, with owner Jerry Jones becoming one of the most notorious leaders in sports. On the field, they have achieved incredible success, making eight Super Bowl appearances and winning five of them. Their five Super Bowl victories tie them for third-most all-time with the San Francisco 49ers and just one win shy of the leaders, the Pittsburgh Steelers and New England Patriots.

The Cowboys made their first appearance in the Super Bowl in 1970, losing Super Bowl V to the Baltimore Colts. However, one year later, the Cowboys returned to the big game and avenged their loss by securing a dominant victory over the Miami Dolphins 24-3. The Cowboys legendary quarterback Roger Staubach won the Most Valuable Player honors in Super Bowl VI by completing 12 of 19 passes for 119 yards and two touchdowns, including one to Hall of Famer Mike Ditka. The Cowboys continued their strong run in the early years of the Super Bowl's existence by again making the big game in Super Bowl X, where they lost narrowly to the Pittsburgh Steelers.

Super Bowl XII was another chance for the Cowboys to redeem themselves after a tough loss in Super X two years earlier. This time around, the Cowboys squared off with the Denver Broncos; thanks to a dominant defensive performance, Dallas was able to win the title by a final score of 27-10. The Most Valuable Player award was split by a pair of defensive linemen, Harvey Martin and Randy White, who earned the honor by combining for three sacks in the game. A year later, the Cowboys again made it to the Super Bowl but came up short against the Pittsburgh Steelers this time, losing by a score of 35-31.

Perhaps the greatest era of Cowboys football came in the 1990s, as the team secured three Super Bowl victories during this decade. The first came in Super Bowl XXVII in 1993, when they faced off against the high-powered Buffalo Bills offense at the Rose Bowl. The Cowboys dominated the Bills on both sides of the ball, winning the game in a blowout with a final score of 52-17. Star quarterback Troy Aikman won the Most Valuable Player award by completing 22 of 30 passes for 273 yards and four touchdowns.

When was the last time the Cowboys won the Super Bowl?

When was the Cowboys' first Super Bowl win?

The Dallas Cowboys won their first-ever Super Bowl on January 16th, 1972, in Tulane Stadium against the Miami Dolphins by a score of 24-3. The Cowboys were coming off a devastating 16-13 loss in the previous year's Super Bowl but were able to avenge it with a dominant performance against Miami. Roger Staubach won the Most Valuable Player award by completing a pair of touchdown passes in the victory.

What Cowboys players have been Super Bowl MVP?

In each Cowboys Super Bowl victory, a different player has won the Most Valuable Player award. In their first Super Bowl in 1972, quarterback Roger Staubach won the award by throwing for 119 yards and a pair of touchdown passes. In their next victory in 1978, a pair of players split the award as defensive lineman Harvey Martin and Randy White earned the honor by combining for three sacks. In the 1990s, Troy Aikman, Emmitt Smith, and Larry Brown each won an MVP following three Cowboys Super Bowl victories.

Pages Related to How Many Super Bowls Have The Cowboys Won?