What is Sumo Wrestling? 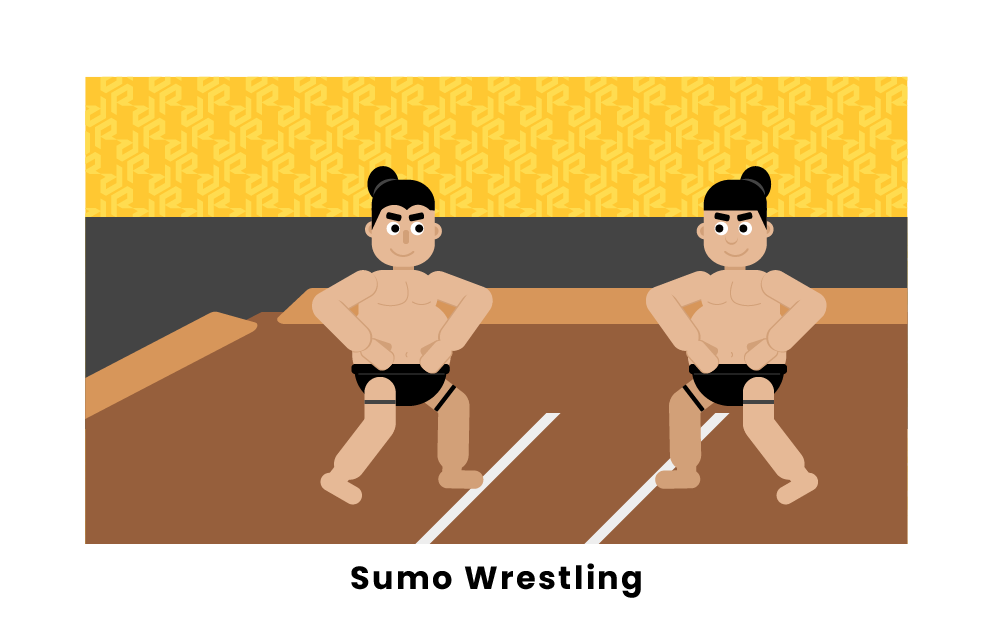 Sumo wrestling is a complex activity with a rich history tying back to ancient Japan. With traditional roots and intricate technical skills, sumo wrestling goes much deeper than large men wrestling in loincloths. Read further to explore the basics of sumo wrestling and how this unique activity grew to become a staple of entertainment in Japan.

Sumo wrestling is derived from ancient Japanese dance rituals where the strongest men would display their skills to please the gods and express gratitude for bringing a good harvest. Later down the line in 1192, sumo became a test to compare strength and determine the strongest fighters. During the Edo Period, sumo wrestling grew in popularity and transformed into the modern sport we see today. 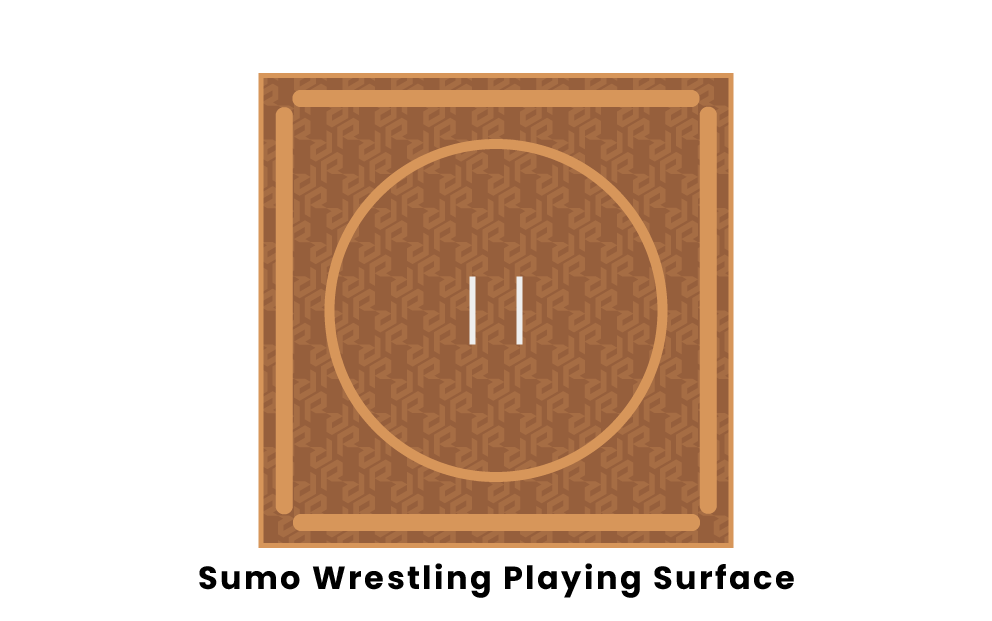 Sumo wrestling takes place on the dohyō, the elevated clay surface covered with sand that houses the ring, spanning 4.55 meters in diameter. Before the start of the match, wrestlers stand behind two white lines called the shikirisen that are painted on either side of the ring. As part of the pre-match ceremonies, the dohyō is "cleansed" by placing dried chestnut, dried kelp, dried cuttlefish, nutmeg berry, and cleansed rice in a small hole in the middle of the ring as an offering to the gods. 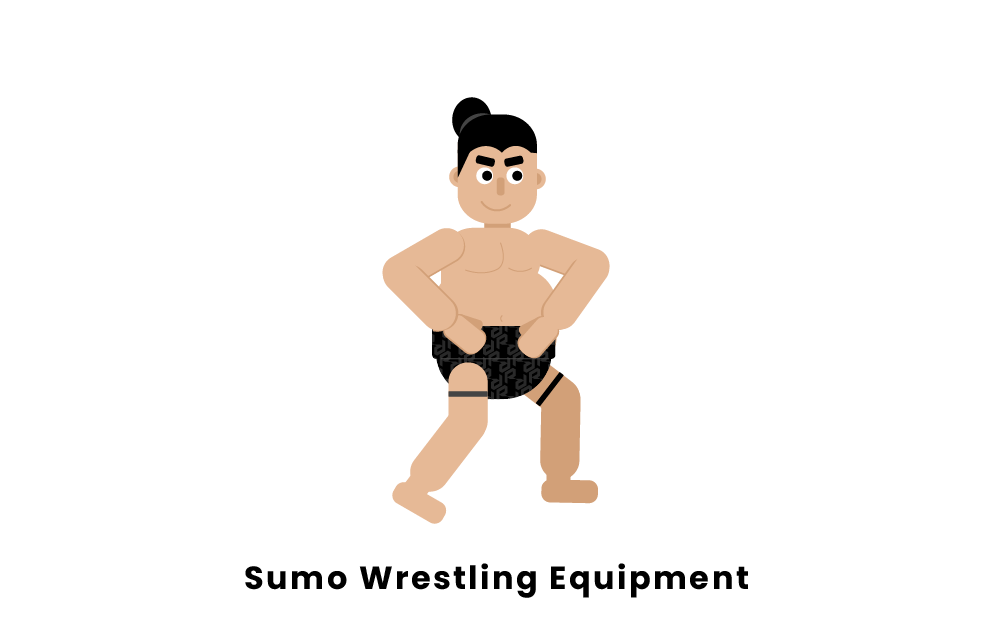 New clay dohyōs are constructed before every tournament, and they must be evenly coated with sand using a brush so referees can determine when a wrestler steps out of the ring. The wrestlers themselves wear nothing but a mawashi, which is a fabric loincloth that typically spans around 9 meters when unfolded. Sometimes the mawashi can be embellished to include long, decorative tassels, which is risky because wrestlers can grab their opponent's mawashi to knock them off balance.

Here is the essential Sumo Wrestling equipment you should have:

Sumo wrestling takes a great deal of mental and physical energy. The objective of sumo wrestling is to get the adversary to exit the ring or hit the ground with any part of their body that isn't the soles of their feet. Wrestlers also try to break their opponent's concentration while on the dohyō, which would cause lapses in judgment and force them off balance.

Unlike many styles of wrestling, sumo has no weight classes. There are only a few exceptions to what wrestlers are not permitted to do, including hair pulling, eye-gouging, and choking. Punching with closed fists and grabbing the crotch area of the mawashi are also banned, however open-fist slapping and grabs of the mawashi outside of the crotch area are both legal maneuvers.

Here are the most important sumo wrestling rules to know:

Strategies used include pushing your opponent until they fall, and forcing out, which means locking the opponent up with strong grabs and pushing them out of the ring. Wrestlers can also thrust repeatedly in quick succession to keep their opponent at bay. A good counter to pushes is throws, where wrestlers use their opponent's hinge points to pivot and throw them on the ground. The most dominant strategy is lifting, where the wrestler uses position and timing to lift their opponent in the air.

Here are the most important sumo wrestling strategies to know: 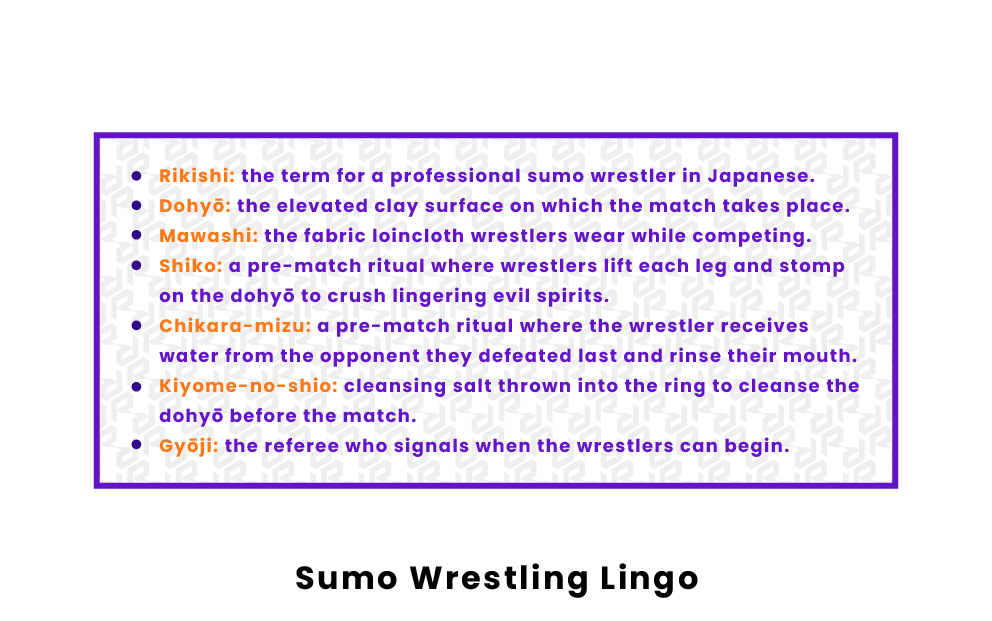 Here is the common terminology and slang in sumo wrestling:

Widely considered to be the best sumo wrestler of all time, Taiho was the youngest wrestler to achieve the highest rank in sumo wrestling, yokozuna, at just 21 years old. Chiyonofuji rivals Taiho for his greatest of all-time title, and is a household name in sumo. He is known for his stellar technique and left-handed "death grip." Also noteworthy is wrestler Futabayama, who set the record for most consecutive bouts won by winning 69 straight in the 1930s.

Here are the most famous sumo wrestling players to know:

There are six divisions that rank wrestlers within the Japan Sumo Association, the highest being makuuchi and the lowest being jonokuchi. The top-tier of wrestlers are in the yokozuna, who are the best of the best. While wrestlers fluctuate through the ranking system, called banzuke, based on performance at tournaments, a wrestler who reaches yokozuna is never demoted and is expected to retire once their performance begins to lag.

Here are the divisions of sumo wrestling you should know (ranked from high to low):

Every year, the Japan Sumo Association puts on six tournaments, called honbasho, at four different locations around Japan. Each tournament lasts 15 days, and at the end of each, the wrestlers either move up in banzuke if they have a winning record or are demoted if they have a losing record. Wrestlers in the makuuchi and juryo divisions will have one match per day, while lower-ranked wrestlers might have more infrequent matches.

Here are the most popular tournaments in sumo wrestling:

Is it hard to reach the yokozuna rank?

Achieving yokozuna is incredibly difficult, as there have been just over 70 wrestlers to reach this rank since the creation of modern sumo wrestling. Wrestlers are typically promoted to yokozuna after winning two consecutive honbasho, requiring impeccable skill and technique.

Is there a weight limit or different weight classes?

Sumo wrestlers are divided by skill level, not weight class. Because of this, technique is vital, especially to smaller wrestlers, as wrestlers can weigh in at well over 350 pounds. Smaller wrestlers could have an advantage if they can use their agility to quickly move around a larger opponent.

Sumo wrestling pits two large, strong men against each other and forces them to collide with all of their might. This collision in tight quarters produces vast amounts of concussions that negatively affect the wrestler's career. In retirement, wrestlers must severely alter their diet to prevent themselves from cardiovascular disease and obesity.

Lower divisions of sumo wrestlers are paid a very low amount of money, if at all. The most talented wrestlers, typically in the yokozuna, win tournaments and earn upwards of 1.5 million Yen (about $13,900)for victories. However, the Japan Sumo Association takes nearly half of the winnings to pay taxes.

Pages Related to What is Sumo Wrestling?