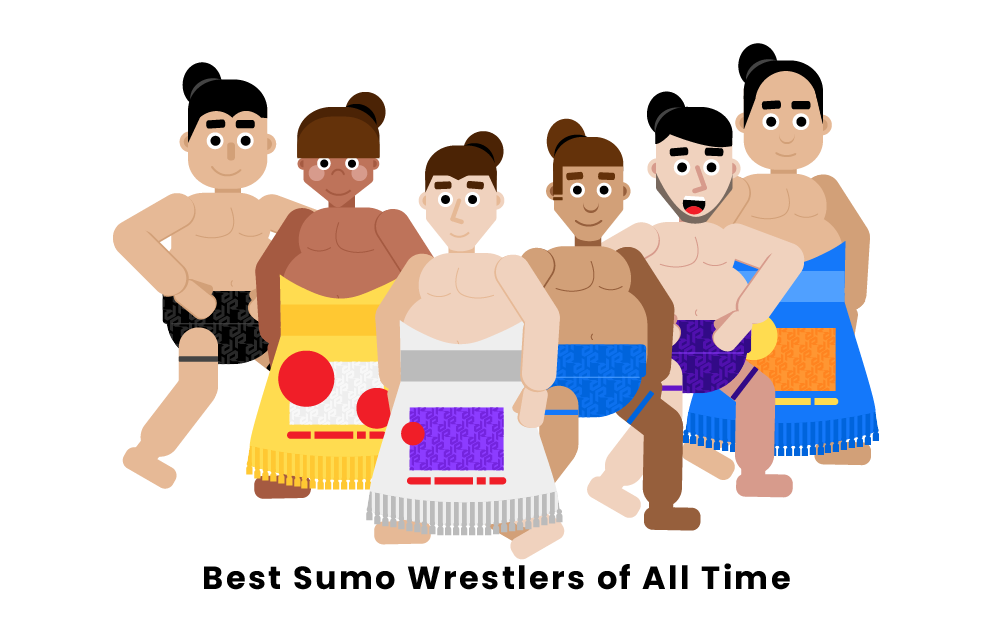 Rooted in a Shinto ritual dance where men display their strength in front of the gods, sumo wrestling is now a popular hand-to-hand combat sport. In Japan, there are annually around 650 sumo wrestlers, also known as rikishi, who compete in six divisions of sumo. Listed below are six of the greatest wrestlers in sumo history.

Who are the Best Sumo Wrestlers of All Time?

Originally from Ulaanbaatar, Mongolia, Hakuhō Shō is arguably the greatest sumo wrestler of all time. During his two-decade career, he won 45 Makuuchi Division Championships and has the most career wins of any sumo wrestler, retiring with 1,187. In addition, he broke the record for most wins in a calendar year by winning 86 out of 90 bouts in the 2009 season. Seven years into his prestigious career, Hakuhō was given the title of yokozuna, the highest rank possible in sumo wrestling. Between his many world records, Hakuhō Shō is undoubtedly one of the best sumo wrestlers of all time.

Though a Hawaiian native, Konishiki Yasokichi is one of the best sumo wrestlers of all time. Weighing in at a peak of 287 kg (633 lb), he is the heaviest wrestler to ever compete in sumo and was known popularly by the nicknames “Dump Truck” and “Meat Bomb.” During his 15 years on the professional circuit, he won 730 matches. He was steadily promoted until he reached the status of Ozeki, the second-highest rank in sumo wrestling, in 1987. Ten years later, Konishiki turned to a career in television and film and retired.

Born in Oahu, Hawaii, Akebono Tarō is easily one of the most famous sumo athletes. From his debut in March 1988, Akebono won six special prizes and four kinboshi prizes. After only two years, he reached the makuuchi division and began competing in the highest-ranking tournaments. Between then and his retirement in 1995, he won 11 top division championships, even achieving the rare feat of winning three consecutive tournaments. In 1993, he became the first non-Japanese-born wrestler to become yokozuna. Thanks to his stellar record and infamous rivalry with Takanohana Toshiaki, Akebono will forever be remembered as one of the most famous and successful sumo wrestlers of all time.

Nishi-Ku native Yamamotoyama Ryūta is one of the most famous names in early 21st-century sumo wrestling. Weighing in at a peak of 265kg (584 lb), he is the heaviest Japanese-born Sumo wrestler in the sport’s history. Since his debut in early 2007, Yamamotoyama has won championships in both the Makushita and Jonidan divisions. In 2009, he made it to the makuuchi division and competed for two years until he retired at the esteemed rank of Maegashira. After the match-fixing scandal that ended his career, he began participating in reality television and minor film roles.

USA-born Futabayama Sadaji was the greatest sumo wrestler of the early twentieth century. Since debuting in 1927 at only 15, Futabayama was a landmark athlete. By 1932, he reached the makuuchi division and became known for his long winning streaks against his opponents, even breaking Tanikaze Kanjinosuke’s 160-year record of 63 consecutive wins. With a winning streak of 69, Futabayama holds the all-time record for most consecutive bouts won. Since he set this record in the late 1930s, many consider his record unbreakable. In 1938, he was made the 35th yokozuna. After a seven-year reign, he retired as one of the very best in sumo history.

Hailing from the northern island of Hokkaido, Taihō Kōki is considered by many to be the greatest sumo wrestler of the postwar period. From his 1956 debut, it took him only four years to enter the makuuchi division. Another year after that, at the age of 21, he became the youngest wrestler to become a yokozuna. He won 32 Makuuchi championships during his career, a feat that was record-setting for six decades. He also won 45 consecutive times between 1968-1969, the best streak seen in the sport since Futabayama 30 years earlier. When he retired in 1971, he became a coach as well as a legend.

Chiyonofuji Mitsugu was one of the best sumo wrestlers of his time and held multiple records during his 21-year professional career, including most career wins with 1,045 and most victories in the top division with 807. While he struggled with injuries early in his career, he was able to reach the makuuchi rank by 1975. He was taught by two former yokozuna and eventually became a yokozuna himself in 1981. Weighing in at 278 lb, he is one of the smaller sumo wrestlers on this list but was nonetheless able to achieve a professional record of 1045-437-170, making him one of the best of all time.

Asashōryū Akinori is a former Mongolian sumo wrestler who became the first yokozuna from Mongolia and the 68th of all time. He rose to the top rank of the sport quickly, as he was promoted after his 23rd professional tournament. He won a total of 25 makuuchi tournaments throughout his career, which is the fourth-most of all time. Akinori was also the first sumo wrestler to win all six makuuchi tournaments in the same year in 2005. He finished his career with a professional record of 669–173–76.

Kitanoumi Toshimitsu was a Japanese professional sumo wrestler, born in 1953 in Hokkaido, Japan. He dominated the sport in the 1970s, earning the rank of yokozuna at age 21, the youngest to ever do so. Throughout his impressive career, Toshimitsu won a total of 24 makuuchi tournament championships, as well as special prizes for outstanding performance and fighting spirit. He finished his career with a record of 951-350-107 and still holds the record for the second-most tournaments won while ranked at yokozuna (63). Kitanoumi Toshimitsu retired from sumo wrestling in 1985 and opened his own training stable, the Kitanoumi stable. He served as the chairman of the Japan Sumo Association for a number of years before his death in 2015.

Who is the most famous sumo wrestler of all time?

Between his unparalleled amount of total career wins, his record number of wins in a calendar year, and an altogether stellar performance history at the highest division possible, the most famous sumo wrestler of all time is undoubtedly Hakuhō Shō. After becoming the 69th yokozuna in 2008, he held the peak position for an extensive thirteen years before retiring as a permanent part of sumo history.

Which sumo wrestler holds the record for the most career wins?

The record for most career wins is held by the 69th yokozuna, Hakuhō Shō. Between his debut in May 2001 and his retirement in July 2021, Hakuhō won a total of 1,187 matches. In addition to this record, he also set the record for most wins in a calendar year by winning 86 of the 90 matches in which he competed in 2009.

Which sumo wrestler holds the record for the most consecutive wins of all time?

Futabayama Sadaji holds the record for the most consecutive wins of all time. Before him, the previous record of 63 consecutive wins was held by Tanikaze Kanjinosuke, the fourth yokozuna, in 1782. Over 150 years later, Futabayama surpassed this record during his 1938 season. He continued this streak by winning six more matches until he was finally defeated in early 1939 by Maegashira Akinoumi after suffering from a bout of amoebic dysentery.

Pages Related to Top 6 Best Sumo Wrestlers of All Time