Top 6 Best Strongmen of All Time 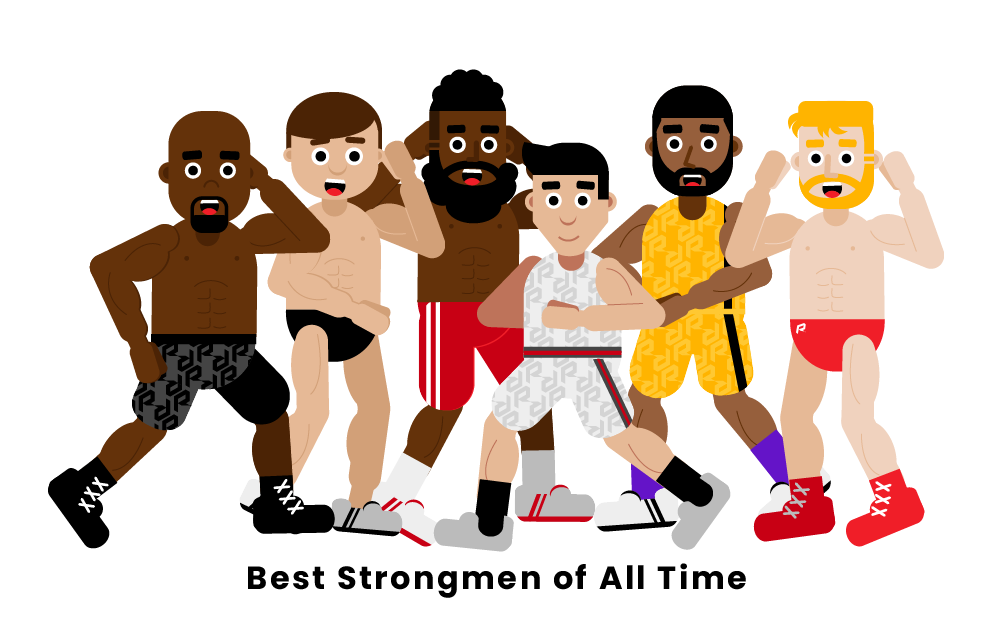 Amongst the many difficult achievements in the sporting world, becoming a successful strongman is certainly near the top of the list. Dedicating oneself to becoming a strongman takes time, effort, and unbelievable stamina. Unsurprisingly, only a few men have earned the right to be remembered for incredible feats of strength. Here, we will take a look at the top six best strongmen of all time.

Who are the best strongmen of all time?

A Lithuanian athlete born in 1975, Žydrūnas Savickas grew up taller and stronger than most of his schoolmates. After watching a strongman competition on television in 1989, the then 14-year-old devoted himself to becoming a professional strongman. Following two years of training, Savickas entered his first strongman competition at 16. Though he did not win, he defeated many of the adult competitors, gaining instant recognition for his skills. Savickas also participated in powerlifting contests, a sport that he had practiced since the age of 13, and in only his second powerlifting competition, he set a nationwide Lithuanian record.

Savickas quickly became a big name in the strongman world, and in 2000, he won the silver medal in the IPF World Powerlifting Championships, lifting over 2,200 pounds. A double knee injury in 2001 nearly ended Savickas’ career, but he fought back to return to the sport and resumed his strongman feats in spectacular fashion, winning six Arnold Strongman Classics and three TWI World’s Strongest Man Contests. Among Savickas’ weight records are 490.5 pounds in the Log Lift, 467.5 pounds in the Axle Press, 705.5 pounds in the Giant Barbell Deadlift, and 1018.52 pounds in the Hummer Tire Deadlift.

Born in Fort Lupton, Colorado, in 1982, Brian Shaw first rose to fame as a strongman in 2011, when he won both the Arnold Strongman Classic and the TWI World’s Strongest Man Contest. Shaw chose to become a strongman after early success as a basketball player in his hometown and during his college career. After graduating from college, Shaw entered his first strongman competition, the Denver’s Strongest Man contest, in 2005. He stunned the crowd by winning the event without any training as a strongman. Afterward, Shaw decided to pursue strongman contests as one of his primary sports.

Born in 1953, Bill Kazmaier is one of the many legends of strongman competition history, and he began his career with an impressive display of the feats he would continue to perform over the course of decades. At his first national powerlifting competition in 1977, the 24-year-old Kazmaier managed to squat an astonishing 782 pounds while also bench pressing 534 pounds and deadlifting 804 pounds. The following year, at age 25, Kazmaier won the IPF World Championships, setting a world record when he bench pressed 622 pounds. His skills only continued to improve, and in 1981, Kazmaier became the first man ever to bench press 300 kilograms (661 pounds).

As a strongman, Kazmaier also impressed, winning the World’s Strongest Man title three years in a row, in 1980, 1981, and 1982. Kazmaier’s victories came at such a wide margin over his competitors that the competition asked him not to return for a few years in order to give other athletes a chance. Kazmaier retired from competition in 1992, but his all-time weight records remain impressive and include a 915-pound raw deadlift at the Highland Games (1981), a 1,055-pound silver dollar deadlift at the 1982 World’s Strongest Man Competition, and a 675-pound gym bench press record.

A name known not only in strongman competitions but by many people outside of the sport, Hafþór (or Hafthor) Björnsson is a towering presence who has become known not only for his feats of strength but for his skills in the ring and on the screen. Björnsson began his strongman career after his career as a basketball player was impacted by injuries. Starting up in the strongman business at age 20, Björnsson began his many feats by winning the Iceland’s Strongest Man competition, which he then proceeded to win a further eight times across his career.

Beginning in 2014, Björnsson became known worldwide for his recurring role on HBO’s hit TV Show Game of Thrones, in which he played the villainous and imposing Gregor Clegane, also known as “the Mountain.” His character’s nickname stuck to Björnsson outside of Game of Thrones, and he is often referred to as “the Mountain” on the strongman circuit. After working on Game of Thrones, Björnsson also achieved the pinnacle of strongman competition, winning the title of World’s Strongest Man in 2018 and also winning three consecutive Arnold Strongman Classics from 2018 to 2020. Recently, Björnsson has also taken up boxing, fighting in an exhibition match against former fellow strongman Eddie Hall in March of 2022, which Björnsson won by unanimous decision.

Born in Staffordshire, England, in 1988, Eddie Hall initially hoped to be a professional swimmer, but family health problems, anxiety, and issues at school caused him difficulty in this pursuit. However, after working through his struggles and vowing to turn his life around, Hall decided to pursue becoming a strongman. He found training as a strongman to be a natural remedy for his anxiety and used that training to improve both physically and mentally. In 2010, Hall was able to enter his first strongman competition after another competitor dropped out, and in a stunning upset, he won the event by a half-point margin. Now convinced that he could succeed as a strongman, Hall went on to win the UK’s Strongest Man competition and performed well at various European and World’s Strongest Man events.

In 2015, Hall set a world record at the Arnold Strongman Classic by deadlifting 1,019 pounds and then broke that record a few months later at the 2015 World Deadlift Championships. In 2017, Hall finally achieved one of his lifelong goals by winning the World’s Strongest Man competition. Since then, Hall has continued to perform at strongman competitions and even fought in an exhibition boxing match against Hafþór Björnsson, though he has retired from most major strongman competitions.

Widely considered one of the most underrated strongmen, Polish-born athlete Mariusz Pudzianowski proves that even lesser-known strongmen are still capable of astonishing feats. First entering strength contests at the age of 16, Pudzianowski won a Polish Bench Press Championship in 1983 by lifting 353 pounds. After taking a break from strength training to study martial arts, Pudzianowski still managed to impress when he returned to strength competitions, bench pressing more weight than he previously had (452 pounds) without any extra training.

Who is the best strongman of all time?

Who has the most World’s Strongest Man titles?

Who has the most Arnold Strongman Classic titles?

Pages Related to Top 6 Best Strongmen of All Time