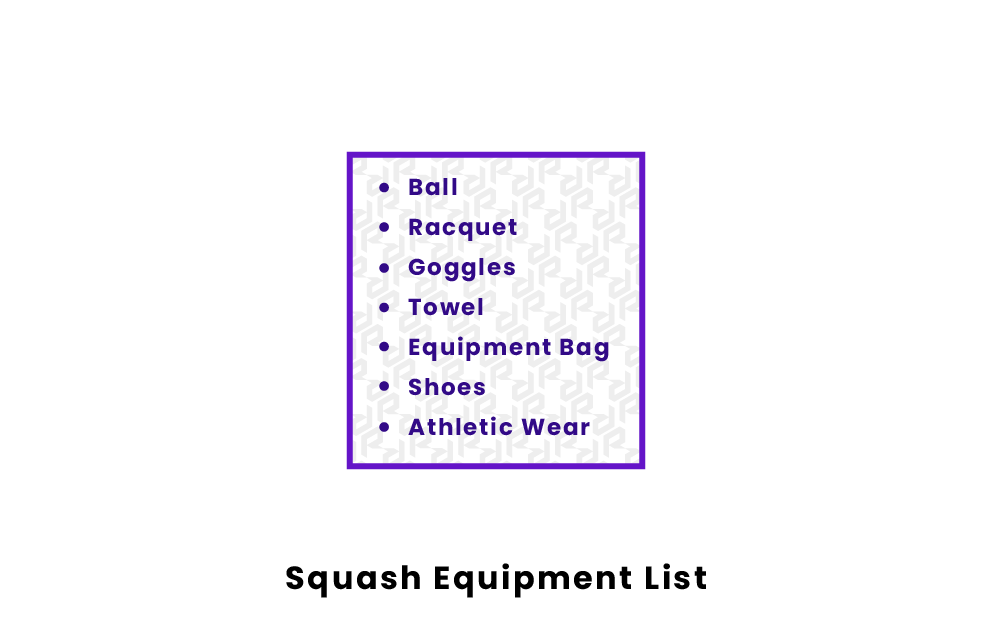 Squash is an indoor sport that is played in either one on one singles format or two on two doubles format. Each player in a game of squash has their own racquet which they use to hit a small and hollow ball. Squash is played on a court with the full four walls, similar to a racquetball or handball court. Although these sports can be played in one wall or three wall courts, squash is only played in four wall courts. Squash players do not need a ton of equipment, but the sport is impossible to play without essential pieces of equipment such as a racquet, squash balls, goggles, correct shoes/athletic wear, and more.

Racquets are by far the most important piece of equipment that squash players should have. This is of course because without one, you can not hit the ball. You also can not just pick up any racquet and jump right into a game. Making sure the racquet is the correct size and weight for you is extremely important because if it is not, the player using it could be uncomfortable or unable to take a proper swing at the ball. The ball could be the only piece of equipment that is more essential than a racquet. Having a ball is obviously important, but having the correct ball is something squash players need to watch out for. Given that handball and racquetball can be played on squash courts and use similar balls, players should check to make sure they are playing with a squash ball, as there are differences between the different balls.

Squash is an extremely competitive and fast paced game. This list compiles the equipment needed for your next squash match. 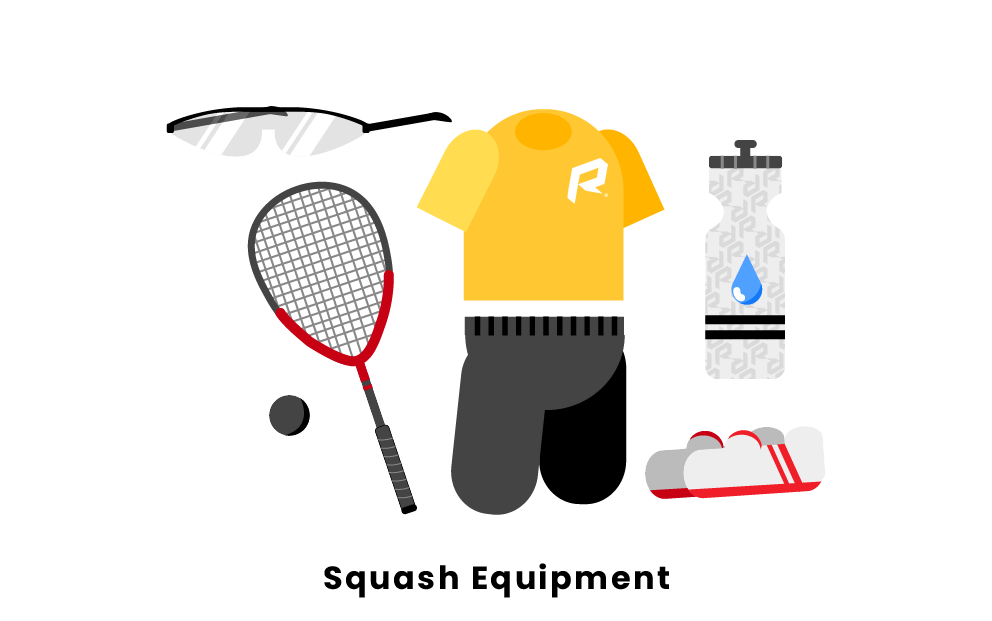 Squash is a sport that does not require lots of equipment to play. Players wear a shirt and shorts, the ball is small, and the court is similar to an empty room. An essential piece of equipment to have is a squash racquet. Not to be mistaken with a tennis racquet, squash racquets give the player extra power in their swing to get the ball to the front wall. Having the right racquet is important for comfort. Squash matches also can not be played without a ball. Six types of squash balls are designed for different levels of play. Double yellow balls are the only balls used by professional squash players, but can also be used by any player who is looking for a challenge. Goggles are vital to players because there is a risk of serious eye injury while playing squash. The tight court space and high speeds the ball travels at can cause serious injuries if struck in the eye with the ball, so players should always wear protection.

Squash balls are small and hollow. Using the correct ball for your squash game can actually make the game much easier. Squash balls are colored fully black, except for one or two dots in the center of the ball. These dots indicate what kind of squash ball you have. The difference between squash balls is in their bounce and their size. Balls with “slower” bounce will not bounce nearly as high as a ball with “faster” bounce. There are six different combinations of color and dots on squash balls, with two yellow dots being a professional level ball and one blue dot intended for amateur squash players.

The double yellow dotted balls will not bounce as high and will stay in the air for less time than other kinds of squash balls. A single yellow ball is to be used by experienced players who are not on the professional stage, with single green balls also being an advanced level ball. The difference between single yellow and green balls are the green balls give a much larger advantage in hang time. A single red squash ball is for beginners, and a single orange ball is designed for use in high altitudes, as its bounce and hang time are lower than even the double yellow ball.

In squash, the racquet is arguably the most important piece of equipment that a player will use. Players have many options to make sure that they have the right racquet for them. Squash racquets can be up to 27 inches in length, slightly smaller than the 29 inch maximum set on tennis racquets. Squash racquets look similar to tennis racquets, but they must be smaller because of the limited size inside squash courts. Squash racquets also have a slightly different shape to them, as they are more teardrop and oval shaped. The racquet’s teardrop-shaped head gives players more power in their shot, which is very important when playing with the hollow squash balls because they do not travel easily.

Wearing goggles while playing squash is extremely important. Squash goggles are similar to goggles worn in racquetball. Players wear goggles while playing squash to protect themselves from injuring their eyes. Squash balls travel very fast during play, and if a player is struck by one, there is a serious risk of damaging your eye temporarily or permanently. Players can also injure their eyes by being struck by a racquet or running into another player. When it comes to a body part as vital as the eyes, there is no reason to risk injuring them, so wearing goggles is extremely important to remember.

If you watch professional squash, you may notice that many of the professionals do not wear goggles while playing. Goggles are currently not required to be worn during professional squash matches, mainly because players think they are uncomfortable and unnecessary. However, while the pros might not like to wear them, anyone playing squash should always wear goggles, as there have been plenty of cases of players seriously injuring their eyes because they were lacking protection.

It is very common for squash players to bring a towel with them to their match or practice session so that they can wipe off perspiration. Towels are used in many sports, and squash is no different. Having a towel with you is convenient for players and does not take up much space in a bag to bring with you.

Although playing squash does not require much equipment, it is always helpful to have a bag for said equipment. Bags are shaped to look like a squash racquet to fit the uniquely shaped item, and are sized based on how many racquets they can fit. It is common for players to buy larger bags than the amount of racquets they need, and fill the extra space with the rest of their equipment.

Squash is a fast paced game, where players must make quick cuts, turns, and jumps while running around the court. Squash shoes look similar to any other athletic shoe, but the main difference is in their soles. Squash soles are very light and made out of non-marking gum rubber. It is important to not buy squash shoes with black soles, as they will mark up the light colored court. It is common for many squash courts/clubs to not allow black soled shoes in order to maintain their courts, so keep this in mind when searching for your next pair.

While playing squash, players are mostly sprinting when they need to move to the ball. This fast paced game is certain to make players sweat, so it is important to be wearing the correct clothing when this happens. Squash players wear a shirt and shorts (female players can wear a skirt as well) with non-marking sneakers. Jeans are not permitted on many squash courts and will not be comfortable to wear while playing. Non-marking shoes are the most important part of squash clothing. They must be worn so the court does not get damaged or marked up while players run around. Players may want to bring a change of clothes with them to play squash because they will certainly get sweaty and bring a second pair of shoes to not bring anything outside onto the court.