Top 6 Best Womens Athletes In Sports Of All Time

Who are the top 6 best women Athletes in Sports?

Babe was an outstanding athlete and person that excelled in almost everything she did. Not only to she perfect and master multiple track events, become a professional golfer, and master basketball and baseball but she also did this during a time where women were not seen as equal to men and was reprimanded for not being feminine enough. She was successful and accomplished in almost every sport she played including also tennis, bowling, and volleyball and believed that she would be the greatest athlete to ever live. During high school, she excelled so much in basketball that she was offered money to compete in a semi-professional basketball league. After her basketball success and winning medals during the Olympics in track and field,

she would go on to become a professional golfer, winning a total of 55 tournaments including three U.S. women's opens. In 1949, Zaharias, along with three other people, helped to create the

Ladies Professional Golf Association (LPGA) in order to give women a better chance to compete in the golf world. Even though she was considered a professional in the golf world, she would not let that stop her from competing in other sports that she had a passion for. When she was competing on the golf tour, she would still continue to play 17 sets of tennis each day and also starred on the bowling lanes. Zaharias was also named the AP Female Athlete of the Year for three straight years from 1945-1947. While living with cancer, Babe earned her third U.S. women's golf championship and secured her sixth AP Female Athlete of the Year award.

Jackie Joyner Kersee is highly regarded as a top female athlete of the 20th century. During her running career, Joyner went to four different Olympic games including 1984,1988,1992,1996, winning a total of six medals during this time. During her first Olympic games, located in Los

Angeles in 1984 earning a silver medal in the heptathlon14. During her next Olympic games Joyner won the gold in the long jump. This medal was actually a record for the United States as

she was the first American woman to ever win the gold medal for the high jump event. During her next two olympics Joyner won one more gold medal as well as two bronze, bringing her total medal count in her olympic game history to six. Joyner had a rough childhood, having to fight through financial distress and poverty with her athletic abilities in order to succeed and live a better life. She succeeded throughout high schools in many sports including track, basketball, and volleyball. For track, Joyner was able to win the National Junior Pentathlon championships four years straight. Along with these championships, Joyner also broke the Illinois state record for high jump. This is the time that she just began to break the surface into the top tier of the athletic world. Joyner played basketball and track at UCLA on a full scholarship, later stopping her play in order to start training for the olympics that she wanted to compete in 1984.

Mia Hamm was definitely the first big international star that women's soccer has come across. In

fact, she is widely considered the best female soccer player ever. Hamm broke into the scene when she was only a teenager. When Hamm was 15 she was a player on the women's national team, being the youngest player to ever play for them.In 1989 went to take on her next task on the women's college stage. She would graduate in 1994 having secured four National Collegiate Athletics Association (NCAA) championships, only continuing the dominance that everybody already knew that she had. After she graduated from UNC her professional soccer career truly started. She had won the Women's World Cup in 1991 while still attending UNC and later followed up the win with another title during 1999. During her career, she was also able to win two gold medals as a part of the women's team during the 1996 and 2004 Olympics. Because of her dominance on the international stage, Hamm also secured the 2001 and 2002 Woman's Player of the Year Award, presented by Fifa which is considered one of the biggest honors for international soccer players. Hamm was able to play a total of 17 years during her career, allowing her a lot of time to score many goals, actually securing the record for most international goals scored by a woman or a man. This record would later be broken by fellow American, Abby Wambach but is still a record nonetheless. Her success led Hamm to have a large amount of fame paralleled to the fame that men soccer players received. This was a big step for female athletes as it gave women a bigger stage in the sports world.

Serena Williams has had to work extremely hard and endure many hardships to become one of the top female athletes to ever live. She had to work through many injuries during her career, as well as a pregnancy, to battle to the top of the tennis world. She had to also fight the hardships that come along with being a black woman in America, similar to what Jackie Joyner Kersee had to endure during her whole career. Serena began her career in 1995 but it did not take off until 1999 when she secured her first major championship. Not long after she crossed her first major championship off her list, she secured the sixth career slam in women's open era history when she did it in 2003. This really jump started her career as she has gone on to capture the most major grand slams by a women in open era history with a whopping total of 23. Her athletic prowess is so far above the rest of the competition as when she captured her 23rd grand slam title she was pregnant with her daughter. Since giving birth, she has come back to win many games but has not captured another title. During her career, Williams has also been able to dominate on the doubles stage with her older sister Venus. Her resume of the many singles and doubles titles during her career has secured her spot on this selective list of top women's athletes. 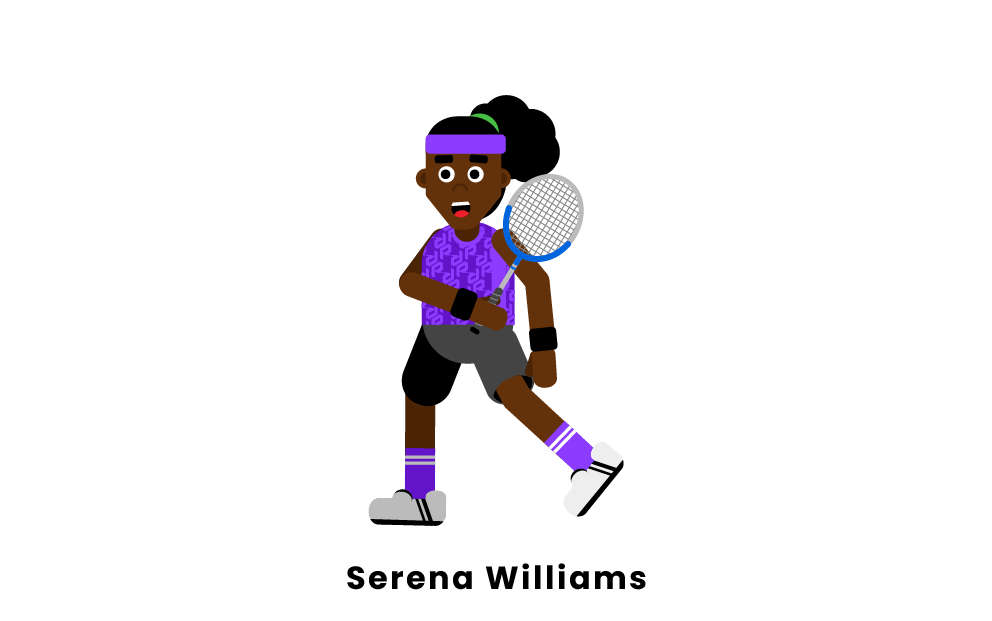 Billie Jean King earned her spot due to both her accolades and success on the court as well as what she did for women and their rights off of it. From the time she was young, King knew that she wanted to be the top women's player in the game. Following her first career grand slam victory at Wimbledon in 1966, she accomplished her goal. After she became the number one player in the work in 1966, she did not look back but instead put the pedal to the medal winning a total of 39 singles and doubles grand slams during her career. Of the 39 championships, 20 were Wimbledon titles, 13 were U.S. open titles, 4 French Open titles, and 2 Australian Open titles. During her career, King was the first woman to win $100,000 but she still received less prize money than men when she would win her championships. Because of this, she took a stand against women getting paid less and decided to speak out about it in order to spark change. King was challenged to a match by former tennis player Bobby Riggs so that he could try to prove that women were superior to men, thus explaining the prize money wage gap. King would go onto defeat Riggs in straight sets and the "Battle of the Sexes" became the most watched tennis match ever. This did spark the change that King desired as women are now paid equal to men and women are now also are looked at on a level playing field compared to men.

Coming out of high school, Cheryl Miller was the top basketball player in the country and decided to continue playing basketball at the University of Southern California. Miller was able to continue her dominance on the next level winning the NCAA women's tournament and the tournament's Most Outstanding Player award in both her freshman and sophomore seasons. While playing for USC Miller claimed the Naismith College Player of the Year three times while also being named an All-American all four years she played. After she helped USC win two

titles, she was the star on the United States Women's National Basketball team when they won their first ever gold medal at the 1984 Olympic games in Los Angeles. After leaving college, Miller was well regarded as the the best basketball player in USC's history; her jersey eventually became the first player that the school ever retired. After her playing career ended, Cheryl Miller returned to her alma mater to become the head coach of the women's team. From 1993-1995 she compiled a 44-14 record, winning the 1994 Pac-12 Conference championship. When the WNBA was created in 1997, Miller stepped in as the coach and general manager of one of their teams: Phoenix Mercury. During 1995, Miller received one of the highest honors that any basketball player can receive. She was inducted into the Naismith Basketball Hall of Fame.