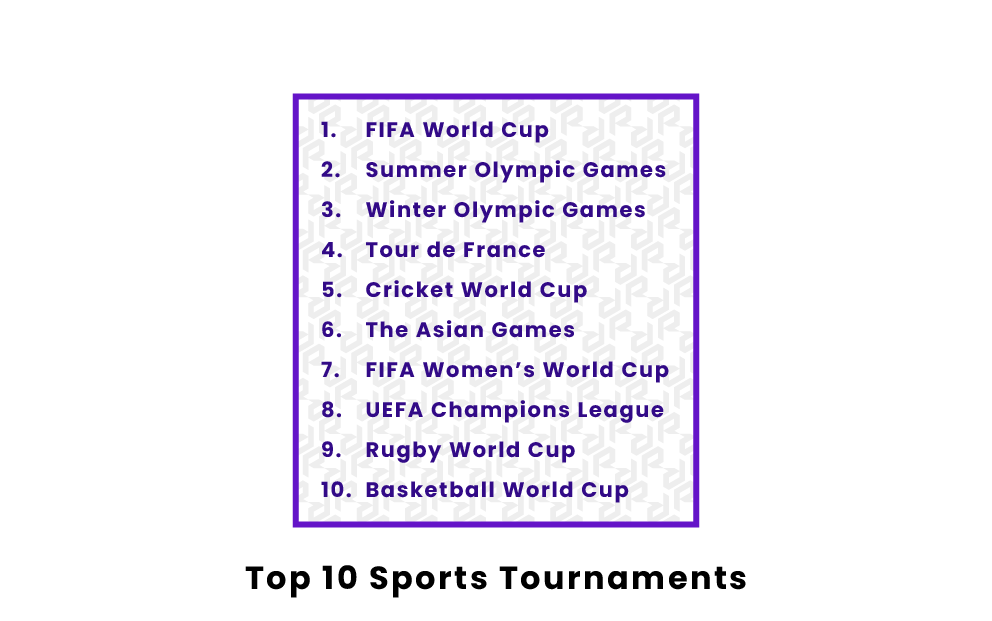 Sports tournaments attract billions of viewers every year, being some of the most popular events around the world. There are many different international sports tournaments, though 10 competitions have proven their impressive global reach through their massive viewership. Read on to learn all about the top 10 biggest sports tournaments in the world!

What Are The Biggest Sports Tournaments In The World?

The Tour de France is an annual sports tournament in which the world’s best cycling teams compete in a long-distance race that spans multiple weeks. The first Tour de France was held in 1903 and was contested by 60 different European cyclists. Today, the Tour de France includes riders from all around the globe, cycling in teams. It is estimated that each year, the event attracts roughly 3 billion viewers tuning in for at least one minute of viewing, an impressive audience.

Like the FIFA World Cup and both Olympic Games, the ICC Cricket World Cup is held every four years. One of the most popular sports on Earth, cricket’s premier international tournament draws over a billion viewers. The first ICC Cricket World Cup was hosted in England in 1975 and was won by the West Indies. So far, the most successful national cricket team has been Australia, winning three World Cups in a row in 1999, 2003, and 2007.

The Asian Games is the second-largest multi-sport tournament, behind the Olympics Games. Held every four years, the Asian Games allows athletes from every Asian country to compete across a diverse array of sports events. The first Asian Games were held in 1951 in New Delhi, India. Each day of the tournament, the Asian Games attracts tens of millions of viewers, making it one of the biggest sports tournaments on Earth.

The UEFA Champions League is a soccer tournament that is held in Europe. The tournament spans from the fall through the spring each year and pits Europe’s best soccer clubs against each other to determine Europe’s best club. The first UEFA Champions League tournament was held in 1956 and was won by club soccer legends Real Madrid. Each year, over 300 million people tune in to support their favorite soccer club as they face off against other European powerhouses.

The FIBA Basketball World Cup is the premier international basketball tournament. The competition was created in 1950 and is hosted every four years. The United States is the most successful participant in the tournament, holding five gold, three silver, and four bronze medals. Amazingly, the 2010 FIBA World Cup racked up more than 800 million views during the competition, demonstrating the popularity of basketball around the globe.

What is the biggest sports tournament in the world?

The biggest sports tournament in the world is the FIFA World Cup. Every four years, the event is held in a different FIFA member nation, and the world’s 32 best national soccer teams face off for the trophy. In the 2018 FIFA World Cup, an estimated 3.57 billion viewers tuned in to watch the tournament. That number is expected to increase to 5 billion in the 2022 FIFA World Cup in Qatar.