Top 10 Scariest Athletes of All Time 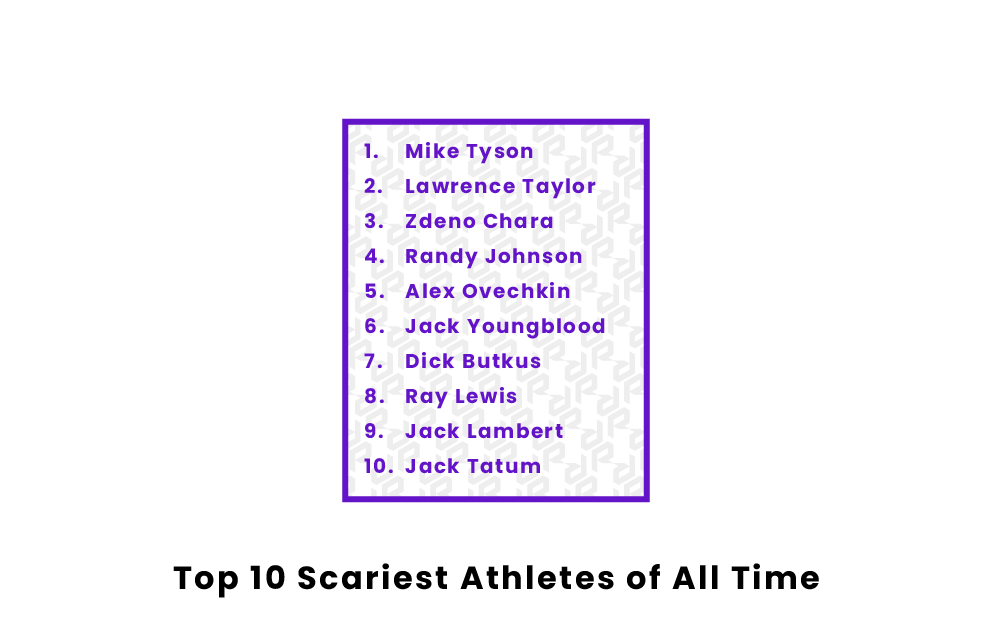 Professional athletes are bigger and stronger than the average human– and some of them are downright scary. The athletes on this list made a name for themselves by placing fear in their opponents, thanks to their performances and their personalities. From boxers to baseball players, who are the top 10 scariest athletes to ever play?

Who are the Scariest Athletes Ever?

Mike Tyson was a violent, scary competitor. Nicknamed “Iron Mike” and “The Baddest Man on the Planet,” Tyson had quite the reputation. He backed up this image in the ring as one of the greatest fighters of all time.

Much of Tyson’s legacy is based on his ruthlessness, thanks to his behavior in boxing and in real life. His most famous moment may be biting off part of Evander Holyfield’s ear in a heavyweight championship fight.

Lawrence Taylor is the first of many football players on this list, thanks to the hard-knocks nature of football. Taylor was a beast on the field, paving the way for pass rushers to come. He was also terrifying: he was stronger and bigger than the average player.

Taylor wasn’t just scary, though. He racked up over 1,000 tackles, 142 sacks, 56 forced fumbles, and nine interceptions in his 13-year career.

Zdeno Chara, on skates, stands seven feet tall. The Slovakian defenseman towered over his competition, playing in the NHL for 25 seasons. Chara was the captain of the Boston Bruins for 14 years, winning a Stanley Cup in 2011.

Chara was not as much of a fighter as one might expect, considering his impressive stature. However, if he ever felt somebody took a cheap shot on one of his teammates, the “Big Man” would drop the gloves. Fighting Chara is almost never a good idea, as his long wingspan allows him to pound opponents without them being able to even touch him.

Randy Johnson was an old-school baseball player: he wasn’t afraid to brush hitters back if they crowded the plate, making use of his intimidating fastball. It helped his image that Johnson was 6 ft 10 in and claimed the title of “tallest MLB player ever” the day he entered the MLB.

Similar to the others on this list, Johnson was made only scarier by his athletic ability: Johnson’s all-time record of 303-166 makes for one of the best winning percentages in MLB history.

Alex Ovechkin is not a fighter, but boy, can he score goals and land body checks. The Russian winger is often called “the greatest goal scorer of all time,” and he is chasing down Wayne Gretzky for the goal-scoring record.

Part of Ovechkin’s greatness comes from how hard it is to stop him, even if you know exactly what he is doing. Ovechkin is famous for scoring goals on one-timers from the faceoff circles to the right of the goaltender. Many have called this area of the ice “Ovi’s Office” since nobody hammers pucks in from there like he does.

Jack Youngblood’s intimidation starts with his name and ends with him playing three playoff games on a broken leg. Yes, you read that right: Youngblood played in the 1979 NFC Championship, Superbowl, and Pro-Bowl with a broken leg!

Youngblood was a defensive end who played 14 seasons for the Rams from 1971 to 1984. Youngblood, who stood 6 foot 4 inches, was a five-time first-team All-pro, a three-time second-team All-pro, and made the 1970’s NFL All-Decade team.

Dick Butkus was a ruthless football player who spent his entire nine-year career with the Chicago Bears. Butkus, who some called the “Most Feared Man,” relied on his image to strike fear into opponents.

Butkus played college football for Illinois, where he played both offense and defense. When he got to the NFL, he settled in as a middle linebacker. Butkus was the defensive player of the year in 1969 and 1970 and was drafted third overall in the NFL in 1965.

Michael Jordan, or “MJ,” is one of the best athletes of all time. Unlike some other players on this list, Jordan is on here mostly for his athletic ability. Jordan was so good, it was scary.

There’s no question that Jack Lambert was a great player, but what really made him scary was his appearance. Lambert lost his four front teeth in high school and never had them replaced. As a result, his smile left opponents shivering with fear.

Jack Tatum was not a nice man: he once paralyzed an opponent in a pre-season game, and then refused to apologize. Many called him “The Assassin,” because of his vicious style.

Tatum had a successful college football career and was a unanimous All-American in 1969 and 1970. He was then drafted in the first round of the 1971 NFL draft by the Oakland Raiders. Despite playing safety, Tatum was one of the hardest hitters to ever play football.

Who is the scariest athlete in the world currently playing?

Out of the athletes actively playing professional sports, Alex Ovechkin is the scariest. Ovechkin, nicknamed “Ovi,” has a slapshot that can surpass 100 miles per hour. He is on pace to score the most career goals in NHL history and still looks lethal even in the twilight years of his career. He may not punch like Mike Tyson, but Ovi can bring it.

Pages Related to Top 10 Scariest Athletes of All Time