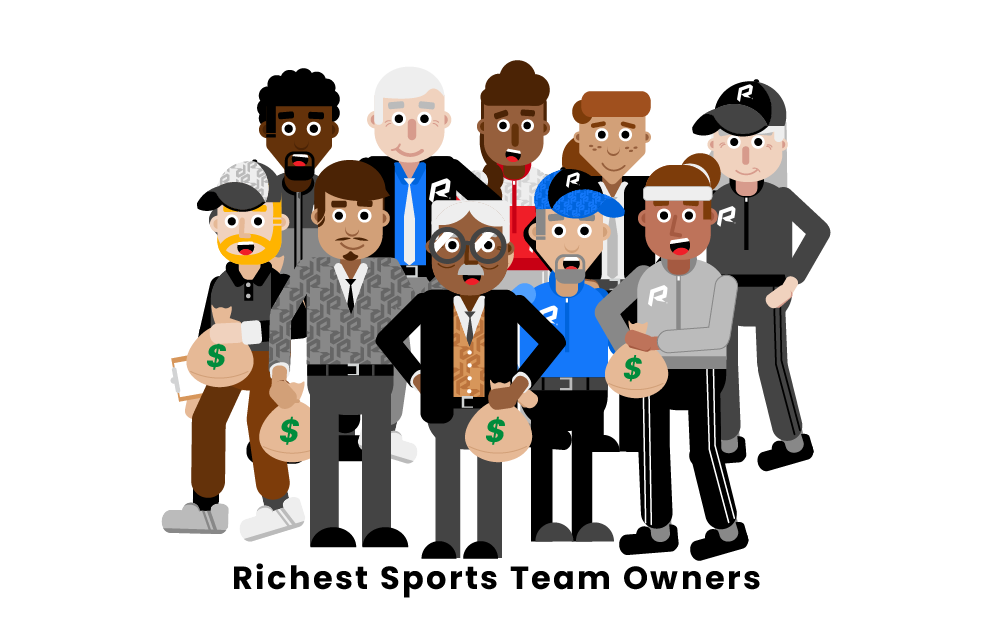 Sports franchises have become money machines whose pricing is rising every year. As most franchises, especially in the US five major leagues, go for amounts north of a billion, only the wealthiest people in the world can afford to invest in a team. Let’s now look at the ten richest sports team owners in the world!

Who Are The Richest Sports Owners Currently?

With a net worth of over $90 billion, Mukesh Ambani is not only the richest sports team owner but is also the richest person in all of Asia. The Yemen-born businessman owes his fortune to his shares of Reliance Industries Ltd., the most valuable company in India. Ambani is the CEO and major shareholder of Reliance Industries Ltd., a conglomerate company that, through its subsidiaries, controls great shares of the energy, retail, and telecommunications sectors in India. This fortune has helped Ambani purchase the Mumbai Indians in 2008, the winningest team in the Indian Premier Cricket League.

Former Microsoft CEO Steve Ballmer sits at second place of the richest sports team owner rankings with a net worth of over $85 billion dollars. In 30 years at Microsoft, Ballmer accumulated a net worth of over $50 million, which makes him one of the 20 richest people in the world. Although he has been retired from Microsoft for almost 10 years, his net worth is still growing thanks to his shares in the company and his investment in the Los Angeles Clippers. As of 2022, Ballmer’s net worth is over $85 billion dollars, while the Clippers have almost doubled in value since he purchased them for $2 billion in 2014.

Rob Walton is the CEO and heir of Walmart, one of the world’s largest retail chains, and has a current net worth of around $60 billion. Walton recently made history with his 2022 acquisition of the Denver Broncos, an NFL team whom he purchased for a whopping $4.6 billion, the largest amount ever spent on a sports team. While his net worth may not be quite as high as Mukesh Ambani’s or Steve Ballmer’s, Walton sits comfortably on the ever-growing fortunes of the Walmart brand, and also owns a 25.5% share of Arvest Bank, the largest bank in the state of Arkansas.

Having amassed a net worth of around $40 billion, François Pinault is among the top five richest people in France. Pinault’s success is tied to Kering, a luxury group that was founded in 1963 as a building material company. In 1999, a year after purchasing soccer club Rennes FC, Pinault started the process of turning Kering into a luxury group by purchasing a majority stake in the Gucci Group. Kering’s portfolio now also includes Saint Laurent, Alexander McQueen, Balenciaga, and many other top-tier designer brands. Pinault is also a great art collector and owns Christie’s, one of the major auction houses in the world.

As the largest stakeholder in Red Bull GmBH, Dietrich Mateschitz has a net worth of around $23 billion, and is at the helm of one of the biggest sports empires in the world, which includes many teams in different sports. In 1987 Mateschitz founded Red Bull GmBH, which has now become the world leader in energy drinks, giving the Austrian a net worth of $27 billion. Mateschitz’ great fortune is tied to the brand image that he has been able to create. The Red Bull brand is now also an iconic sports brand, as the group owns eight soccer teams, a title-winning F1 team, and organizes or sponsors most of the extreme sports competitions in the world.

Masayoshi Son is a Korean-Japanese businessman who has accumulated a net worth of around $21 billion thanks to successful investments in the technology sector. In 2005, Son purchased the Fukuoka Softbank Hawks, who are now among the winningest teams in Nippon Professional Baseball. Son also founded Softbank upon his return from UC Berkeley in 1981. The company is one of the leaders in the technology sectors in Asia and has kept on expanding over the years thanks to Son’s merger-and-acquisition tactics. Softbank also owns Vision Fund, a venture capital fund founded in 2017 whose clients include Apple and Qualcomm, among other technology giants.

The sister of Microsoft founder Paul Allen, Jody Allen has a net worth of around $20 billion. She is the chairperson and majority owner of the Seattle Seahawks. Paul Allen had owned the Seahawks since 1997. He was planning to give away most of his $20 billion fortune to charitable causes when he died unexpectedly in 2018. His sister, Jody, then assumed the role of trustee of his foundation, the Paul G. Allen Trust, and primary heir to Paul’s fortune. Just like her brother was, Jody Allen is a lifelong Seahawks fan and she executes her role of chair of the organization with pride. Although she came into the role by chance, Jody Allen has no plans of stepping down as chair or selling the team.

Owner of the one-time NBA Champions Cleveland Cavaliers, Daniel Gilbert has around an $18 billion net worth that comes from the success of Quicken Loans, the largest mortgage lender in the United States. After obtaining great success with Quicken Loans, Daniel Gilbert founded StockX in 2015, a company that has become the biggest online sale platform of collector’s goods such as sneakers and luxury products. The net worth he’s accrued in almost 40 years places Dan Gilbert among the top 100 wealthiest people in the world.

Wharton graduate Steve Cohen has accumulated a net worth of $17 billion through his hedge funds, despite fines received from the Security and Exchange Commission. Although he already owned a minority stake in the franchise, Cohen is the most recent member of this list, as he purchased a controlling stake in the New York Mets in 2020.  Cohen is now the CEO of Point72 Asset Management, which replaced SAC Capital Advisors in 2018, one of the biggest hedge funds in recent history. His aggressive investment tactics make him the wealthiest owner in the MLB and one of the top 50 wealthiest people in the United States.

Similarly to Steve Cohen, David Tepper’s fortune comes from the great performances of his hedge fund Appaloosa Management, which manages over $13 billion of assets, giving him a total net worth of around $16 billion. After years as a minority stakeholder in the Pittsburgh Steelers, David Tepper purchased the Carolina Panthers in the NFL in 2018 and founded Charlotte FC in 2019, the first North Carolina-based MLS franchise. Tepper constantly figures in the annual ranking of highest-earning hedge fund managers. In 2021, the Pittsburgh native earned $1.6 billion, making him the sixth highest-earning hedge fund manager in the world.

A former Apple hardware engineer, Robert Pera is now the CEO of Ubiquiti Inc., a technology company he founded in 2015, which has led him to a net worth of around $14 billion. Pera, who was 34 when he became team governor of the Memphis Grizzlies in the NBA, is the youngest in the top ten richest sports team owners. Pera’s Ubiquiti Inc. is among the leaders in the United States in the production of wireless products, such as antennas and wifi routers. Ubiquiti Inc. has contributed to bringing stable wireless connections to some of America’s most rural and underprivileged areas.

Los Angeles Kings and LA Galaxy owner Philip Anschutz possesses a net worth of around $13 billion. The 82-year-old from Kansas has recently sold his 27% stake in the Los Angeles Lakers. Anschutz owns various companies in the railroad, oil, and entertainment businesses, including Anschutz Entertainment Group, which controls the operation of over 100 stadiums and concerts worldwide. The owner of the music festival Coachella, he is also one of the two Americans to make the Forbes top 400 wealthiest people in the world list every year since 1982.

Who is the richest sports team owner?

Who is the youngest sports team owner?

In 2012, Robert Pera became the youngest sports team owner when he purchased the Memphis Grizzlies at the age of 34 years old. The founder and CEO of wireless network devices company Ubiquiti Inc. is still the youngest on the list of the wealthiest sports team owners in the world. The Memphis Grizzlies’ value has increased by almost five times since Pera became the governor of the franchise.