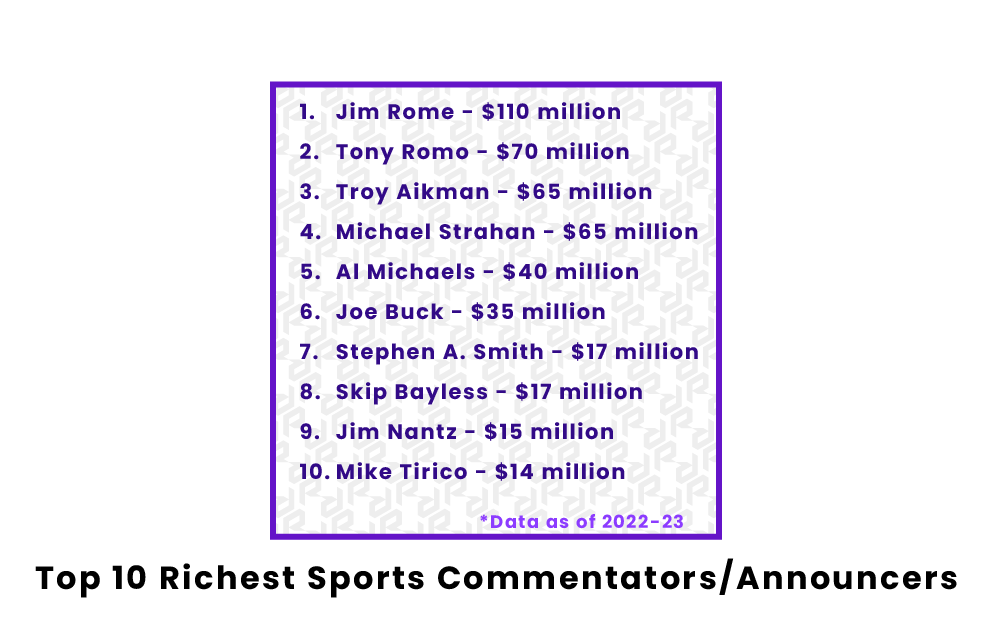 When watching a sporting event on television, the number-one attraction is obviously the action on the court or field. However, one aspect of the broadcast that can make the event even more fun to watch is an entertaining announcer. The most talented of these commentators can make millions of dollars. Below, the 10 richest sports commentators/announcers are ranked and discussed.

Who Are The Richest Sports Announcers/Commentators?

The richest sports commentator in the world is Jim Rome of CBS Sports, who has an estimated net worth of $110 million. Rome makes over $10 million more than the next-closest competitor on this list, with an annual salary of $30 million. Currently, his main job is hosting The Jim Rome Show, a radio show that airs daily and is carried by CBS Sports. Rome began his career working for KCSB-FM, a college radio station, while he was attending UC Santa Barbara. Rome then worked his way up through the radio ranks and became one of the most well-known voices in the business.

The first in-game announcer on this list, Tony Romo is the second-richest sportscaster, with a net worth of $70 million. A broadcaster for CBS, Romo has an annual salary of $18 million. He currently works with Jim Nantz, who will be seen later on this list, on CBS’s number-one team for NFL coverage. Romo is a former NFL quarterback who played for the Dallas Cowboys from 2003-2016. Immediately following his retirement, he moved into the broadcast booth, and he has thrived there ever since.

Similar to Romo, Troy Aikman is a former quarterback from the Dallas Cowboys who moved into the broadcast booth upon retirement, and he has a current estimated net worth of $65 million. Currently an analyst for ESPN’s coverage of Monday Night Football alongside Joe Buck, Aikman has a salary of $18 million.  Prior to joining ESPN this year, Aikman had served as the number-one analyst for FOX’s NFL coverage for the previous 20 seasons and had called multiple Super Bowls with FOX alongside Buck.

Unlike his fellow members on this list, Michael Strahan makes a good portion of his money outside of sports, contributing to his estimated $65 million net worth. With an annual salary of $17 million, he is one of the lead anchors for ABC’s Good Morning America and hosts other non-sports shows such as the gameshow Pyramid. Nonetheless, Strahan’s roots are in football; he is a former NFL linebacker, and his background will always be in sports. His current sports jobs include working for FOX’s NFL pregame show FOX NFL Sunday, as well as covering the NFL on other channels throughout the season.

One of the most legendary broadcasters of all-time, Al Michaels, whose net worth is estimated at $40 million, is the first play-by-play commentator on this list. His current annual salary of $15 million comes from his coverage of Thursday Night Football on Amazon Prime Video. Michaels has had several broadcasting gigs throughout his career, including Monday Night Football on ESPN, Sunday Night Football on NBC, the Olympics, and the World Series. One of his most famous calls was the United States’ upset of the Soviet Union in hockey at the 1980 Winter Olympics, dubbed “The Miracle on Ice.”

Troy Aikman’s partner for ESPN’s coverage of Monday Night Football, Joe Buck is the second straight play-by-play announcer on this list, with a net worth of $35 million. Like Aikman, Buck moved from FOX to ESPN for the 2022 NFL season, and his salary currently sits at $15 million a year. While with FOX, Buck served as their lead play-by-play announcer for both NFL and MLB coverage, calling several Super Bowls and World Series. Buck’s father was legendary announcer Jack Buck, who was one of the most famous announcers during his years.

The highest-paid employee at ESPN before Buck and Aikman arrived, Stephen A. Smith is known as one of the most entertaining individuals in the sports world and has a current net worth of $17 million. He currently is making $12 million a year. His main role is serving as a commentator on ESPN’s daily debate show First Take, but he also serves several other roles for the network by appearing on SportsCenter, NBA Countdown, Stephen A’s World, and the Stephen A. Smith Show on ESPN radio.

Skip Bayless, whose net worth currently sits on par with Stephen A. Smith’s at $17 million, is also similar to his former TV partner in that his main role is partaking in a daily debate show. He currently makes $8 million a year. Along with Shannon Sharpe, he hosts Skip and Shannon: Undisputed on FOX Sports daily. He previously worked alongside Stephen A. Smith on First Take before leaving ESPN to join FOX in 2016. He also was a sports journalist for several years before switching to television full-time.

Serving as Tony Romo’s partner for CBS’s NFL coverage, Jim Nantz is another all-time great sports broadcaster whose net worth is estimated at $15 million. He currently makes $10.5 million in annual salary. Nantz has been with CBS since 1985, and while he was initially just a studio host, he has worked his way up the ranks and covered just about every sport the network covers. He has called NFL games, March Madness College Basketball, PGA Golf tournaments such as The Masters, and several other big events.

The final play-by-play announcer on this list, Mike Tirico also takes the ultimate spot on our overall ranking of richest commentators, having an estimated net worth of $14 million. Tirico currently works for NBC, calling Sunday Night Football and Notre Dame football games. He also helps the network cover the Winter and Summer Olympics. His salary sits at $10 million per year. Tirico previously worked for ESPN for 25 years before joining NBC in 2016. He called Monday Night Football for ESPN from 2006-2015. He has been a studio host and a radio host in addition to his great work as a play-by-play announcer.

While the individuals below did not make the top 10, they still deserve some recognition as honorable mentions. They are listed in alphabetical order by last name.

Who is the richest sports announcer?

The richest sports commentator/announcer is Jim Rome of CBS Sports, with a net worth of $110 million. He currently makes around $30 million a year for his radio and television work. As for in-game announcers, Tony Romo and Troy Aikman both make $18 million a year, which is the highest number of any analyst. Lastly, Al Michaels and Joe Buck are the richest play-by-play announcers in the world, making $15 million a year for their respective jobs.