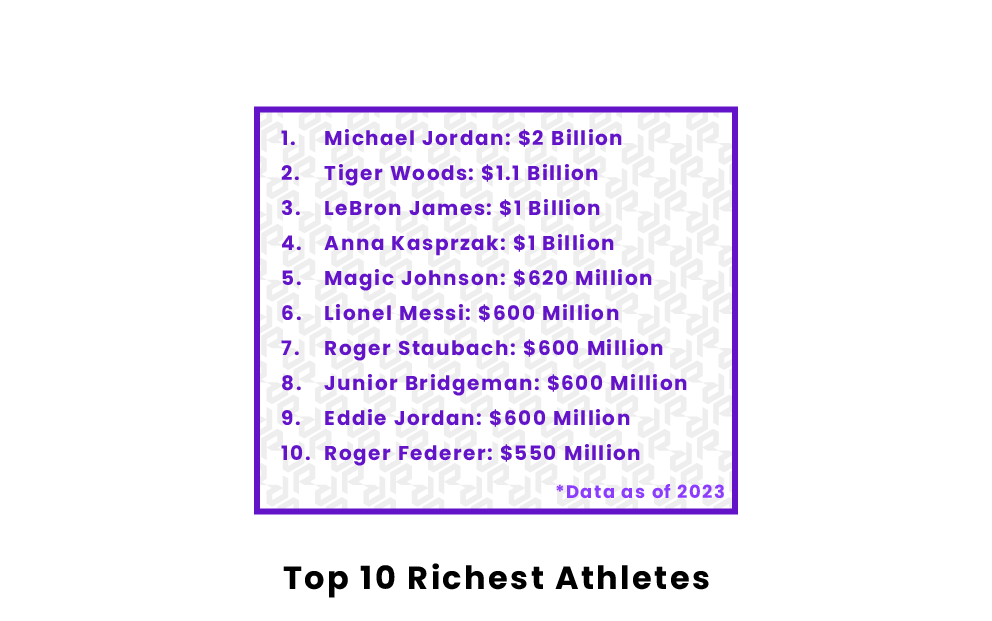 It is no secret that athletes today are some of the richest individuals in the world. When endorsements and salaries are taken into account, athletes can be worth hundreds of millions of dollars, and even up to one billion dollars in some cases. Below, the ten richest athletes in the world are ranked and discussed. The list includes both active and retired players.

Who are the Richest Athletes in Sports?

Considered by many to be the greatest basketball player of all time and possibly the greatest athlete of all time, it is not surprising that the richest athlete in the world is Michael Jordan, who has a net worth of approximately $1.9 billion.  During his NBA career, MJ, as he is often nicknamed, “only” earned around $90 million in salary, so the vast majority of his wealth came from outside the game. His major sponsorship deals are with Gatorade and Nike, with whom he owns the Jordan shoe brand. Moreover, Jordan starred in the popular movie Space Jam, and he is now the owner of the NBA’s Charlotte Hornets. Clearly, Jordan has succeeded in all areas of life and has earned his spot at number one on this list.

Another athlete who is widely considered to be the greatest player in the history of his sport, golfer Eldrick “Tiger” Woods comes in at number two on this list, with a net worth currently around $1 billion. He earned slightly more than Jordan from his athletic performance, obtaining over $110 million from his golf on-course winnings. Off the course, Tiger has several sponsorship deals, including with Nike, Gatorade, American Express, Rolex, Golf Digest, and Buick. Just with Gatorade alone, Woods has his own drink, called “Gatorade Tiger,” that pays him $100 million over five years. Additionally, Tiger owns tens of millions of dollars in real estate.

If you find someone who says that Michael Jordan is not the greatest basketball player of all time, chances are they will say it is LeBron James, who, like Tiger Woods, has a net worth of over $1 billion. While Jordan became a billionaire long after his playing days, Tiger and LeBron are the only two athletes to reach this status while still playing their sport. Due to the rapid growth of the NBA, LeBron has earned over $428 million in salary, significantly more than Jordan did. On the business side, Lebron has earned millions from sponsorships with Nike, Coke, McDonald’s, Samsung, and Dunkin, among others. Furthermore, LeBron’s SpringHill Company, which includes a marketing agency and an entertainment company, adds over $300 million to his net worth.

The first athlete on this list who is not yet a billionaire, tennis player Roger Federer nonetheless has a high net worth of around $700 million. A 20-time Grand Slam champion, Federer has made close to $130 million from his performance on the tennis court. In endorsements, he has earned close to $450 million from companies such as Rolex, Mercedes-Benz, and Uniqlo. Lastly, Federer is currently a global ambassador and part-owner of the Swiss company On-Cloud. While he only has a 3% stake, the company is valued at over $10 billion, meaning Roger owns close to $300 million from On-Cloud. Federer is the most recently retired athlete on this list, announcing the end of his career on September 15, 2022.

The third basketball player to make this list, Magic Johnson has an estimated net worth of around $600 million.  Since he played the majority of his career in the 1980s, well before the NBA’s expansion, Magic’s career earnings amassed to only $18 million. Since his retirement, however, Magic has become quite the businessman. His company, Magic Johnson Enterprises, has earned him the most of his wealth, as it has partnered with giants such as Sony Pictures and Starbucks. In 2012, he became a partial owner of the Los Angeles Dodgers after a group he was a part of purchased the team.  Finally, Magic has earned some money-making television appearances on networks such as ESPN and TNT.

The richest boxer in the world, Floyd “Money” Mayweather has a net worth of around $565 million. What makes Floyd unique compared to the rest of the athletes on this list is that the majority of his wealth comes from his boxing, not endorsements or other business ventures. When he was at the top of his game, Mayweather earned anywhere from $150-300 million a year from his fights. From one fight alone, where he faced UFC legend Conor McGregor in 2017, Floyd earned over $200 million. From the limited endorsements he does have, Floyd still earns around $10 million per year.

Three soccer players make up the final four spots on this list, and the first is Cristiano Ronaldo, whose net worth is approximately $500 million. His salary is often among the highest in the world, such as in 2019, when he earned $65 million playing for the Italian soccer club Juventus. In total, between salary and endorsements, Ronaldo earns around $100-150 million per year. His endorsements include companies like Nike, Herbalife, and Clear Shampoo. With Nike in particular, Ronaldo has a lifetime deal that is believed to be worth close to $1 billion. If Ronaldo’s off-field earnings are any indication, he will likely move up this list as time goes on.

The second of the three soccer players, David Beckham’s net worth is just behind Ronaldo’s at $450 million. In terms of his salary, Beckham earned around $50 million throughout his career. He has been extremely well-rounded on the business side, earning endorsement money from companies involved in fashion, food, television, entertainment, and several others. In 2018, Beckham and his business partners created an expansion team in the MLS, Inter Miami, which began play in 2020. When Beckham himself joined the MLS in 2007, it was in his contract that he had the right to own a franchise if he wanted to when he was done playing, and that helped get the Miami team into place.

The second golfer in the top 10 richest athletes, Phil Mickelson has a net worth of around $400 million. Known to some by his nickname “Lefty” due to his left-handed golf swing, Phil earned $80-100 million between endorsements and on-the-course earnings during his best days. While he is no longer the golfer he once was, he still makes in the range of $40-50 million a year. His main endorsements are Workday and Barclays, whom he often wears on his shirt when he’s playing in tournaments. Recently, Mickelson signed a contract worth over $200 million to join the new golf tour LIV Golf.

The final member of this list, soccer player Lionel Messi has a net worth of around $280 million. To date, he has earned over $900 million in salary, including his current contract with French side Paris Saint-Germain (PSG), which pays him roughly $75 million per year. His previous contract with Spanish club FC Barcelona earned him a staggering $168 million per year. As for endorsements, one of his major ones is with Adidas, and Adidas has produced soccer cleats bearing his name, called the Adidas Messi cleats. He has also been the cover athlete for several soccer video games, including Pro Evolution Soccer (2009-2011) and EA Sports’ FIFA 2012, 2013, 2014, 2015, and 2016.

While the athletes listed below did not quite make the top 10, their wealth still deserves recognition as honorable mentions.

Who is the richest athlete ever?

The richest sports athlete of all-time is basketball player Michael Jordan. Jordan’s net worth is approaching $2 billion, sitting at $1.9 billion, to be exact. As is the case with most athletes, the vast majority of his wealth has come from outside of his salary from playing. His major endorsements include Nike and Gatorade. Additionally, he is the owner of an NBA team, the Charlotte Hornets, so that only adds to his net worth.