Top 10 Most Intimidating Athletes of All Time 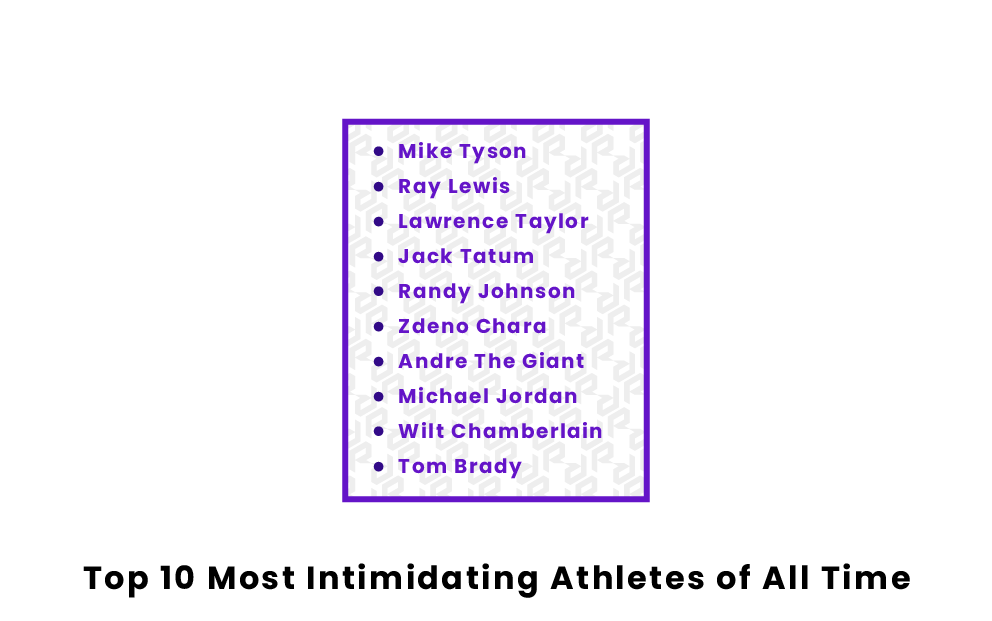 Few would disagree that intimidation is an advantage in sports. Mike Tyson, and many other athletes, made a name for themselves by scaring the competition into submission. For some athletes, the challenge lay not in appearing scary, but in knowing when to slow their savage ways. For other athletes, their impressive skills are enough to intimidate their opponents. Listed below are the top ten most intimidating athletes of all time.

Who are the most intimidating athletes ever?

Mike Tyson earns the top spot on this list for his historic boxing career, where he earned the nicknames “The Baddest Man on the Planet” and “Iron Mike.” Tyson built his reputation as an intimidating force through brutal fighting and an infamous craving for violence. Many even know Tyson as the man who bit off another boxer’s ear. In June of 1997, Tyson faced off with Evander Holyfield for the WBA Heavyweight Championship. During the fight, Tyson bit Holyfield’s ear, ripping part of it off and spitting it out. Although extremely illegal, this is perhaps one of the most intimidating actions that sports has ever seen.

Ray Lewis gets second honors on this list, thanks to his ferocious NFL career. Lewis spent his entire 17 years in the NFL with the Baltimore Ravens and is considered one of the best middle linebackers of all time.

Lewis dominated his whole career: he led his team in tackles as a rookie and led his squad in tackles for 14 of the 17 years he played., Lewis was a dominant run stopper and managed 31 interceptions, just six shy of the record for most interceptions as a linebacker.

Lawrence Taylor was an outside linebacker for the New York Giants from 1981-1993. Taylor also played college ball at the University of North Carolina and is regarded as one of the best college and pro football players of all time.

Taylor was the number two overall pick in the 1981 draft, selected after only George Rogers. John Madden credited Lawrence Taylor, or L.T. as many called him, with revolutionizing the way pass-rushing was played.

Taylor struggled to separate his wild nature on the field from the outside world, often battling drug abuse and personal misconduct. Many claim Taylor could have reached a much higher level of athletic ability if not for his rowdy lifestyle.

Jack Tatum, known as “The Assassin,” was an NFL safety from 1971 to 1980. Tatum played for the Oakland Raiders for nine years and the Houston Oilers for one.

Tatum’s most memorable play occurred in a 1978 preseason game against the New England Patriots. Darryl Stingley caught a pass in the middle of the field and was blown up by a hard hit from Tatum. Tatum’s impact left Stingley paralyzed from the chest down. To make matters worse, Tatum never apologized.

Randy Johnson, nicknamed “The Big Unit,” pitched in the MLB from 1988 to 2009. Johnson, 6 feet 10 inches, was intimidating on the rubber thanks in part to his dominating fastball-slider combo. Johnson’s fastball, which clocked above 100 MPH, often had batters quivering in the box. Johnson hit batters with a pitch 190 times in his career.

Johnson was also intimidating thanks to his dominance as a pitcher. Over his 22-season career, Johnson racked up a total 4,875 strikeouts and 37 shutouts.

Much of Zdeno Chara’s intimidation came from his size: 6 foot 9 inches, without skates. Throw him on the ice, and he’s suddenly 7 feet tall! Chara, nicknamed “Big Z,” played 24 NHL seasons. 14 of those seasons were with the Boston Bruins, during which he served as their captain and appeared in three Stanley Cup championships.

Chara is the tallest person to ever play in the NHL, but he didn’t look out of place thanks to his immense speed., Despite the rigorous athletic demands of hockey, Chara kept up with even the fastest players. He was a premier defender in the league, and players certainly did not want to drop the mitts with Big Z.

Born in France in 1946, Roussimoff was first brought into the wrestling world by Vincent McMahon as a “special attraction.” In addition to a wrestling career, Roussimoff appeared in 13 films, many of which the character he played was simply himself.

Unfortunately, Roussimoff’s stature eventually caught up with him. At age 46, he died due to a heart irregularity in Paris, France.

Michael Jordan is a bit different from the other athletes on this list: Jordan didn’t intimidate opponents with his brute size or strength, but rather his tremendous athletic ability and competitive mentality.

Jordan is often said to be the greatest basketball player of all time, although this topic has been heavily debated in recent years. Either way, there is no denying Jordan’s legacy: he has the most career points per game in both the regular season and playoffs and led his team to win six NBA championships.

Wilt Chamberlain is perhaps the greatest offensive basketball player ever. Standing 7 foot 1 inch, Chamberlain was a force at the center position. Chamberlain holds countless scoring records for the NBA, including being the only player to do any of the following:

Some argue that Chamberlain is the greatest NBA player of all time, with others citing the era he played in as a part of his success. Either way, Chamberlain holds many records that will never be broken, and he retired as a two-time NBA champion.

Tom Brady is not scary in the way Mike Tyson or Ray Lewis was, but he is certainly intimidating. Nicknamed “The GOAT,” Brady has dominated the NFL for nearly 23 seasons. Despite being 45 years old and having children, Brady continues to compete in the NFL.

Brady was not a highly touted player, drafted 199th overall in 2000. He was even originally the Patriots’ backup quarterback but replaced an injured Drew Bledsoe, who experienced internal bleeding after being hit by Mo Lewis., Brady quickly earned the respect of his teammates and famously took the reins in New England.

Brady is the only NFL player to win seven championships in the Super Bowl era. Perhaps his most notable one came in the 2020-21 season, when he left the Patriots and won a Super Bowl in his first year with the Tampa Bay Buccaneers at age 43.

Who is the most intimidating athlete right now?

Perhaps the most intimidating athlete right now is Aaron Judge, an outfielder for the New York Yankees. Judge, 30 years old, just broke Roger Marris’ record for most home runs hit in the American League in baseball. He has been on a tear, putting together what some say to be the best offensive season in MLB history. Aaron Judge is also physically intimidating, coming in at 6’7”, 282 pounds.

Pages Related to Top 10 Most Intimidating Athletes of All Time