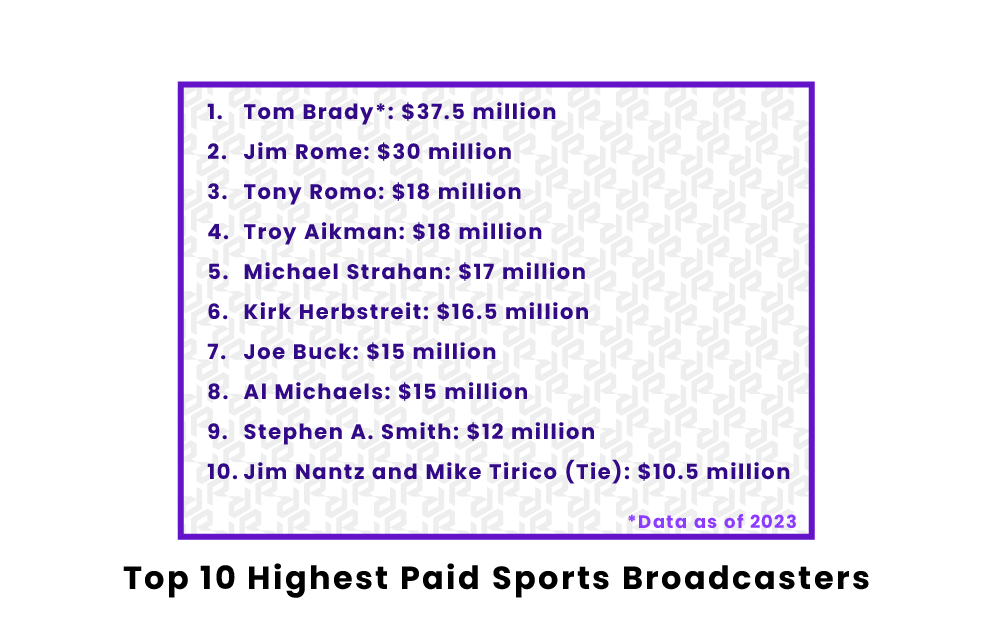 Sports broadcasters have become one of the most important jobs in the sports entertainment industry. They contribute to making some of the best plays in sports history even more memorable with real-time information and valuable context. A good announcer can make all the difference for fans watching a game, and some of the most prized ones are paid handsomely for it. Listed below are the top ten highest paid sports broadcasters in the world by annual salary.

Who are the highest paid sports broadcasters in the world?

Tom Brady is known as the best football player of all time and will be the highest paid sports broadcaster once he retires, making $37.5 million a year. His seven Super Bowl rings and other record-breaking accolades led to one of the biggest bidding wars in television history. Fox ultimately signed him to a landmark 10-year $375 million contract in 2022. The contract only begins after Brady retires, which is why it has an asterisk for now. Since he decided to come out of retirement, the contract has been indefinitely pushed.

Tony Romo is the second highest paid sports broadcaster, making $18 million annually. Romo played quarterback for the Dallas Cowboys from 2003-2016. He was a great quarterback but is now an even better broadcaster. He is currently under a 10-year $180 million contract with CBS in 2020. He is especially known for his ability to predict plays before they happen. He broadcasts football every Sunday with Jim Nantz.

Tied with Romo, Troy Aikman makes an impressive $18 million every year as a sports broadcaster. Aikman played quarterback for the Cowboys from 1989-2000, won three Super Bowls, and made six Pro Bowl appearances. He started working with FOX Sports in 2001 and stayed there for two decades. At FOX, he made an estimated $8 million per year in his last contract. In 2022, he signed a five-year $90 million contract with ESPN. He now joins Joe Buck on Monday night football every week. As a result, Aikman makes just under $1 million per game.

Just behind Romo and Aikman, Michael Strahan makes $17 million annually as a sports broadcaster. Strahan played defensive end for the New York Giants from 1993-2007, won a Super Bowl and was once even declared the defensive player of the year. In 2008, he began working with the FOX NFL crew. He was a member of the pregame show for Thursday Night Football. Since Amazon bought the rights to Thursday Night Football, Strahan transferred to FOX NFL Sunday, the most-watched pregame show in all of sports entertainment.

Kirk Herbstreit is one of the busiest broadcasters in the football industry and makes $16.5 million a year for his efforts. He is mainly known for his role on ESPN’s College Gameday, which he has been doing since 1996. In 2022, he also signed a contract with Amazon to be the color commentator on Thursday Night Football alongside Al Michaels. He doesn't have the glory of being a former professional athlete like most broadcasters nowadays, but he did play quarterback at Ohio State from 1989-1993.

Joining Troy Aikman for Monday Night Football, Joe Buck has recently signed a $15 million a year contract with ESPN. Buck began his career by doing play-by-play for the Louisville Redbirds, a minor league affiliate of the St. Louis Cardinals. Soon after, he began broadcasting the Cardinals. Buck began working for Fox Sports in the early 1990s and has been a leading play-by-play announcer for both the NFL and MLB ever since. In 1994, he became the youngest person to ever announce an NFL game.

Al Michaels is one of the most iconic voices on this list and makes a yearly salary of $15 million. He began working in television in 1971, where he was a baseball commentator. In 1976, he began working with ABC and stayed with them for thirty years. While at ABC, he was the play-by-play commentator for Monday Night Football. After this, he went to NBC Sports and broadcast Sunday Night Football from 2006-2021. In 2022, Michaels signed a three-year contract with Amazon to do play-by-play for Thursday Night Football.

Stephen A. Smith isn’t the stereotypical sports broadcaster, but he is paid $12 million annually for his work. He is better described as a television personality featured on the hit ESPN sports talk show First Take. In the show, Smith states his opinion on news happening in the sports world. He began his career in 1999 and has become one of the most recognizable personalities in sports television today.

As mainly an NFL sports broadcaster, Jim Nantz makes around $10.5 million every year. Nantz began his career in the early 1980s as a play-by-play announcer in Utah for the Jazz and BYU football. He has the largest variety of sports on this list. He commentates on NCAA March Madness, PGA, and the NFL. His main sport is football, where he does the Sunday CBS broadcast with Tony Romo. He has won two Emmy awards for most outstanding sports personality. In the summer of 2021, he signed a new contract with CBS that has him making around $10.5 million per year.

As the play-by-play announcer for Sunday Night Football on NBC, Mike Tirico makes a respectable $10.5 million annual salary. He is especially known for his work with color commentator Chris Collinsworth. He started his career in 1991 with ESPN, where he called all kinds of different sports. He started out by broadcasting golf and the Olympics but also ended up doing Thursday Night Football when it was on NBC. In 2016, he then signed a deal with NBC Sports and has been there ever since. In 2022, he was picked as the successor of Al Michaels for Sunday Night Football and signed a contract worth $10.5 million annually.

Who is the highest paid sports broadcaster?

The highest paid current sports broadcaster is Tony Romo. Romo played quarterback for the Dallas Cowboys from 2003-2016. He was a great quarterback but is an even better broadcaster. He is also currently under a 10-year $180 million contract with CBS in 2020 thanks to his remarkable ability to predict plays before they happen and to give a knowledgeable analysis of the game. Tom Brady will become the highest paid broadcaster once he retires from playing in the NFL.