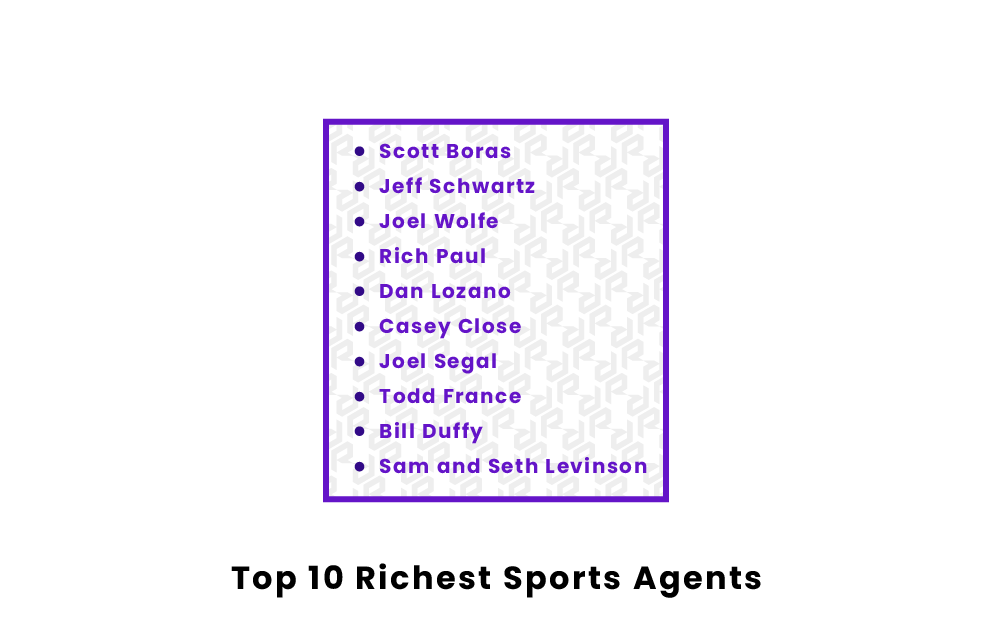 As the contracts in professional sports increase every season, top sports agents are becoming richer and more powerful. Some make millions in commissions every year, especially in leagues like the MLB, the NFL, and the NBA. Let’s find out who the highest paid sports agents are!

Who are the Highest Paid Sports Agents Currently?

Having earned $191 million in commissions as of 2022, Scott Boras easily tops the list of the richest agents in sports. The California native started his career as an agent in 1985 and started rising to the top of the rankings in the early 2000s as Alex Rodriguez’ agent. Boras negotiated two record-breaking deals for A-Rod in both 2000 and 2007, which were the largest deals in MLB history at the time.

Boras, who is the owner and president of Boras Corporation, currently represents other top MLB players such as Bryce Harper, Corey Seager, and Gerrit Cole, whose latest contracts have a combined total value of over $1 billion.

With an estimated net commissions earnings of $68 million, top NBA agent Jeff Schwartz is currently the second richest sports agent in the world. Schwartz started out at IMG in the early 1990s, where he became familiar with player representation as the agent of tennis legend Pete Sampras.

In 2002, Schwartz founded Excel Sports Management, an agency that has redefined athlete representation across several sports. Schwartz’ focus with Excel was to provide a full service to players by representing them even off the field in their marketing campaigns and sponsorship deals. Schwartz currently represents former and current players across different leagues, but his top clients are all NBA players like Russell Westbrook and Kevin Love.

With a net commissions earnings of $58 million, former Oakland Athletics draftee Joel Wolfe closes out the podium of the three highest paid sports agents in the world. Just like Scott Boras, Wolfe specializes in MLB players, as he heads the baseball section at Wasserman, where he is also an executive vice-president.

As the head of the baseball department at Wasserman, Schwartz represents top-caliber players such as Nolan Arenado, Javier Baez, and Marcus Siemen. His most famous deal is the $325 million thirteen-year contract extension between Giancarlo Stanton and the Miami Marlins in 2014, which is still one of the top ten largest contracts in sports history.

With an estimated net commissions earnings of $55 million, Rich Paul is currently the fourth highest paid sports agent. Having started out as Lebron James’ agent in 2003, Rich Paul has quickly climbed up the ladder of player representation in basketball and is now one of the most famous personalities in the entire NBA.

In 2012, Rich Paul founded Klutch Sports, which is now one of the top agencies in the NBA and even in the NFL, counting on some top prospects like Jeff Okudah, Kayvon Thibodeaux, and Mekhi Becton. Rich Paul’s top NBA clients include Lebron James, Anthony Davis, Draymond Green, and Zach Lavine. A series of free agency moves and contract renewals has earned Rich Paul $55 million in commissions in 2022.

Albert Pujols’ longtime agent Dan Lozano closes out the top five of the richest sports agents in the world, having a net commissions earning of $52 million (as of 2022). After twenty-two years of service at the Beverly Hills Sports Council, Lozano decided to create his own agency and founded MVP Sports Group in 2010.

With an estimated net commissions earnings of $48 million, Casey Close is one of the richest sports agents out there. Just like Joel Wolfe, Casey Close is a former minor league player that decided to turn to player representation after not being able to make it to the major league. The Ohio native joined IMG in 1992 and stayed for fourteen years before moving to CAA.

Close then moved to Excel in 2011 to create a baseball division, which he has now been heading for over ten years. Mostly known for representing New York Yankees legend Derek Jeter during his playing career, Casey Close now represents some of the other top players in the MLB, including Kyle Schwarber and Clayton Kershaw.

With a net commissions earnings of $42 million, George Washington University alum Joel Segal lands at number seven in the rankings of the richest sports agents in the world. After heading the football department at SportFive, Segal moved to WME Sports, where he is the managing director of all team sports.

Under WME’s banner, Segal represents the rights of some of the top players in the NFL, such as Khalil Mack, Minkah Fitzpatrick, DeForest Buckner, and Jaylen Waddle. In total, Segal represents sixty-five NFL players whose contracts value exceeds a combined $1.4 billion in value, making WME Sports one of the most powerful agencies in American football.

Todd France is tied with Joel Segal as the seventh richest sports agent in the world, as they both have an estimated net commissions earnings of $42 million. France started out at CAA before moving to Athletes First, which has become a powerhouse in player representation for the NFL.

As head of the football division at Athletes First, Segal has negotiated forty-four contracts and represents some of the biggest stars in the NFL, such as Dak Prescott, DK Metcalf, and Bud Dupree. France most recently negotiated Aaron Donald and Josh Allen’s contract renewals, which are respectively worth $95 and $258 million each.

With net commissions of $41 million, former Utah Jazz draftee Bill Duffy is the third richest basketball agent of all time. After starting out as an NFL agent, Bill Duffy founded BDA Sports Management, which soon became one of the most powerful agencies in the NBA. Duffy sold BDA Sports Management to Endeavor and is now the head of the basketball division at WME Sports.

Brothers Sam and Seth Levinson close out the list of the richest agents in sports with their combined commissions of $40 million. In 1985, the two created ACES, which has become one of the most powerful independently owned agencies in professional baseball history.

ACES and the Levinson brothers have represented hundreds of MLB players in over thirty years of activity and are now representing over fifty players. Some of the biggest names under contract at ACES include David Wright, Justin Pedroia, and Brandon Philips. The Levinson Brothers also negotiated Charlie Blackmon’s $108 million six-year extension to keep him on the Rockies.

Who is the richest Sports Agent?

With $191 million in commissions as of 2022, Scott Boras is the richest sports agent in the world. As the largest contracts in sports are signed in baseball, most of the richest sports agents in the world come from the MLB. The president and owner of Boras Corporation manages almost $4 billion worth of contracts for top MLB players such as Bryce Harper, Corey Seager, and Gerrit Cole, and he has signed some of the largest deals in the league’s history.