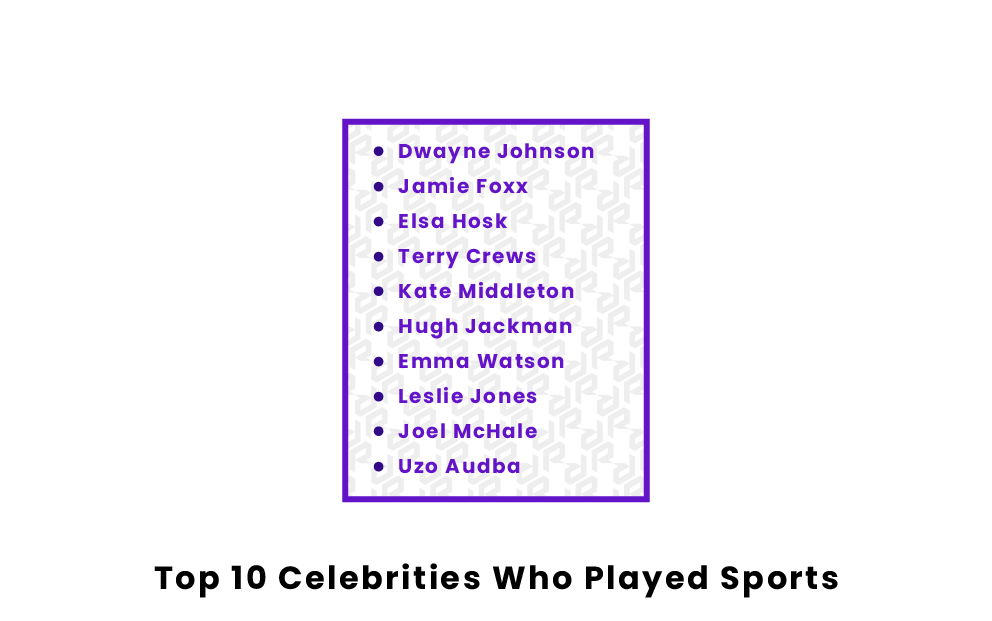 While we know many celebrities for their roles in the entertainment industry, some of the most famous celebrities of our time started out as athletes. Whether they played professionally or in college, below are the top ten celebrities who played sports before they became the actors we know and love.

Before we knew him as an actor, Dwayne Johnson was a professional football player and wrestler. After starting his football career in high school, he accepted a full-ride scholarship from the University of Miami. After an injury, Johnson’s playing time was cut short, and he received no offers from any NFL team. He briefly played for a Canadian league before being cut yet again. Following his father’s and grandfather's footsteps, Johnson made his WWF debut in 1996 as Rocky Mavia (a combination of his father’s and grandfather’s names). Soon after, Rocky Mavia would become known simply as “the Rock,” and would become a legendary wrestler and actor in his own right.

Best known for his Academy Award-winning role as Ray Charles, Jamie Foxx has been a force to be reckoned with on screen and on the field. The Spider-Man: No Way Home actor was even the quarterback at his high school. While honing his musical ability, Foxx also became the first player at his school to pass for more than 1,000 yards. Shortly after, he decided to pursue a career in comedy, and the rest is history.

Victoria’s Secret supermodel Elsa Hosk began playing basketball at age seven. She even joined the Swedish basketball team after graduating high school. Alongside her dedication to the sport, she also began modeling during her teenage years. Due to the intense nature of both passions, she was forced to make a choice. After winning Sweden’s Next Top Model, she became one of the world’s most successful models and left her basketball dreams behind.

Crews' character on Brooklyn Nine-Nine was considered the squad’s gentle giant. Prior to such acting performances, Crews was anything but gentle. His reputation comes from the years Crews spent at the gym and on the field during his six-year NFL career. In 1990, after graduating, Crews was drafted as a linebacker for the Rams. After his time there, Crews played for three more teams (the Chargers, the Commanders, and the Eagles) before briefly playing abroad. Soon after, he quit and became the prolific comedian and actor that we know today.

Prior to her fairytale wedding to Prince William, Kate Middleton was quite the field hockey player. The now Princess of Wales began playing during high school and continued her hockey career in college. She was so talented that she even became the captain of her team at Marlborough College. Aside from her field hockey prowess, Middleton is also known to have a secret talent for running and tennis, and has more than earned her reputation as the most athletic British royal.

It only takes one look at Hugh Jackman in any of the X-Men movies to know that he’s athletic. However, most people don’t know that the Les Miserables star is also an ardent sports fan and former player. In his high school years, Jackman was an avid rugby player, cricket player, swimmer, and high jumper. After graduation, Jackman traveled to England, where he continued to demonstrate his love for sports by teaching PE and coaching sports teams at the Uppingham School until he had his big break.

When most people think of Hermione Granger, athletic is not the first word that comes to mind. Emma Watson, on the other hand, is quite the opposite. The He for She founder played field hockey growing up and brought her love of the sport to the US when she matriculated to Brown University. Watson, in fact, loves field hockey so much that she played a quick game with students at Thorpe Hall Primary School in England to launch a hockey-centric charity.

Known for doing anything for a laugh, Leslie Jones is most famous for her time on Saturday Night Live. Before she was a comedian, she was a successful collegiate athlete. After playing basketball throughout her childhood, the Ghostbusters actress briefly attended Chapman University on a basketball scholarship before transferring to play at Colorado State. Not only is she an avid Knicks fan, she proudly displays her love of sports by sharing her own commentary on TikTok.

Jeff Winger wouldn’t be caught dead playing any sport for Greendale in the show Community, but Joel McHale was more than proud to play football at the University of Washington. McHale had initially been recruited to row, and had never really been interested in football. During his freshman year, everything changed. He walked on to the UW football team as a tight end and played for a fairly successful year and a half. McHale never played a game again but often attributes his time spent on the team to his success in the acting world.

During her time at Boston University, the Orange is the New Black actress loved performing both on stage and on the track. Even though she majored in opera singing, Uzo Aduba was considered one of the best sprinters at BU. Her best events were usually the 55-meter, 100-meter, and 200-meter. As a senior, she even won the Aldo “Buff” Donelli Leadership award. Aduba is still an avid runner and completed the Boston Marathon in a little over five hours.

There are many famous celebrities who played sports well, but a few standouts are Mark Harmon, Mahershala Ali, Channing Tatum, and Billy Crystal. Mark Harmon was a starting quarterback of his college football team. Mahershala Ali went to college on a basketball scholarship. Channing Tatum played football for his college before dropping out to pursue acting. Billy Crystal attended college on a baseball scholarship before transferring schools.

Three of the most famous celebrities to play basketball are the rappers 2 Chainz and Master P, as well as the actor Denzel Washington. 2 Chainz went to Alabama State on a D1 basketball scholarship. Master P attended University of Houston for basketball before stopping shortly after due to a knee injury. Denzel Washington played basketball at Fordham.