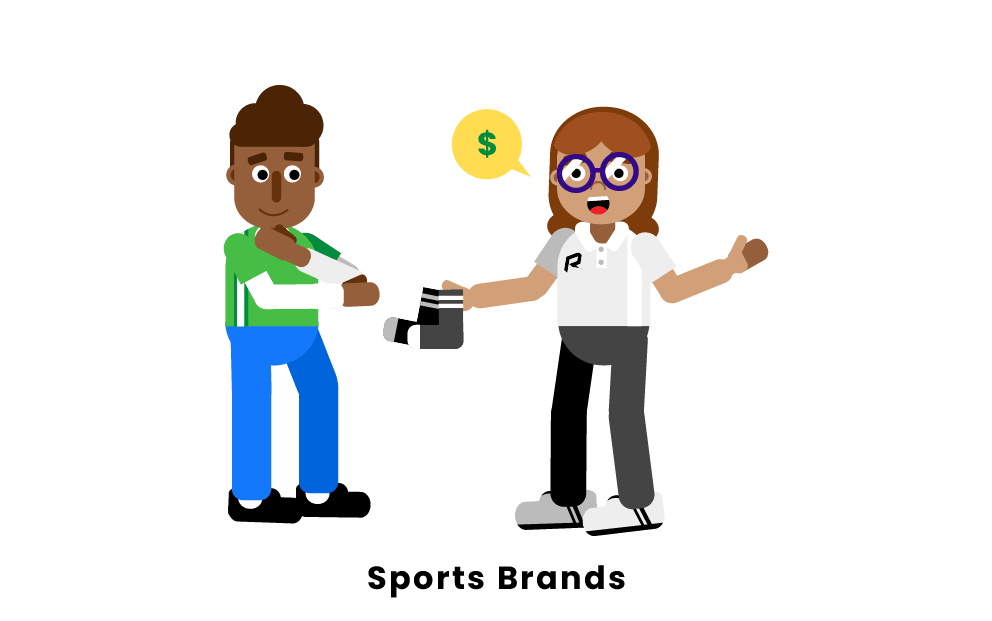 If you are an athlete, chances are that you have a favorite brand you purchase most of your equipment from. Many brands specialize in sports equipment, as some sports require personal protective gear. Some sports brands sell more than just equipment and others have been involved in the business of sports for over a century. Famous sports brands that almost everyone has heard of are Nike, Adidas, Under Armor, and Puma. Other brands thrive in only a single sport such as Everlast, Easton, and Louisville Slugger.

This list compiles the ten most popular sports brands for fans and athletes alike. The world of sports would not be complete without a discussion of the businesses that co-exist with the games.

What are the most popular sports brands?

Nike is known as the biggest sports brand in the world. With an estimated net worth of 36.8 billion dollars, Nike is by far the most valuable sportswear company, more than doubling the net worth of Adidas, it's closest competitor. Known primarily for their shoes, Nike has expanded into clothing and sports equipment. Priding itself on innovation, Nike has been at the forefront of sports technology since its founding in 1964 as a track and field shoe company. Nike is also known for its endorsements with big names like Lebron James, Cristiano Ronaldo, Tiger Woods, and Colin Kaepernick. Nike has diversified itself in university sponsorships. The University of Oregon is the most well-known Nike sponsor as the school was also the brand's founding location. Nike has a sponsorship with over 52% of FBS College Football programs and is the sole manufacturer of jerseys for Major League Baseball, the National Basketball Association, and the National Football League.

Founded in 1949 as a European sports shoe brand, Adidas has been a staple of international sports for years, especially European Football (soccer). In recent years Adidas has been a close competitor to Nike and a secondary brand in terms of finances and popularity. Adidas began with footwear exclusively with a focus on soccer, but the brand has expanded to all sports equipment and clothing over the years. Adidas's focus has continued to be soccer, designing and manufacturing the official FIFA World Cup ball starting in 1970. Adidas is most famous for sponsoring Lionel Messi, one of the most decorated soccer players in history. Other sponsored athletes include baseball's Kris Bryant, hockey's Sidney Crosby, and football's Von Miller. Adidas has university sponsorships as well, including Louisville University, The University of Miami, and Mississippi State. Adidas has established itself as a fashion brand as well as a sports brand, most recently collaborating with the artist Beyonce Knowles on a fashion line. Though it plays second-fiddle to the more popular Nike, Adidas is a well established sports brand in its own right.

Puma has had a resurgence in recent years. In 2019 Puma made Forbes Fab 40 for the first time and reported a 74% increase in shares as opposed to 46% for Adidas and 25% for Nike. Founded by the Dassler brothers in 1919 in their home in Germany, Puma took a few years to become a major shoe brand. Famously, Jesse Owens wore Dassler brand spikes in his historic victories at the 1936 Berlin Olympic Games. In 1948 the official Puma brand was born and began the production of soccer cleats. These grew in popularity both within Germany and internationally. Considered the best soccer player of all time, Pele wore the Puma brand in his World Cup matches for Brazil. Today Puma still specializes in shoes, especially soccer, track, and field, but has developed into a major international clothing brand. For instance, Rihanna has a deal with Puma and has produced her Fenty line of clothing with the company. Though Puma works with the London College of Fashion on their designs, they do not have major university sponsorships. On the professional level, Puma's most famous athlete is Usain Bolt, who has worn Puma spikes in multiple World Record Olympic races.

Under Armour was born in 1996 out of one product, a skintight shirt called "the shorty" , designed to wick off sweat faster than other athletic shirts. The Baltimore-based company was born, specializing in clothing meant to keep athletes dry, cool or warm, depending on the product and situation. After an appearance in the film "Friday Night Lights," its products began to soar. In the two decades since its inception, Under Armour has expanded into footwear, starting with a football cleat and ultimately growing to running shoes, basketball sneakers, and more. Under Armour penned a college sponsorship with the University of Maryland, where the company was born, and has expanded to other schools; UCLA, Notre Dame, Army, Hawaii and Wisconsin to name a few. Famous athletes sponsored by the company include Tom Brady of the NFL, Stephen Curry of the NBA, and Bryce Harper in the MLB. Tom Brady's wife, Gisele Bundchen is a sponsored non-athlete, as is Dwayne "The Rock" Johnson, the former WWE wrestler and movie star.

Along with Nike, Adidas, and Puma, Reebok is considered one of the major sports shoe ware companies of the twentieth century. Founded under a different name in 1895, "Reebok" was born in 1958, named after an African Antelope. In the 1970s and 80s Reebok expanded into the US and its profits began to boom. Reebok made clear that it had three focuses for growth. The first was exercise, the second was the increase of women in sports, and third was streetwear or casual wear. In 2005 Adidas bought Reebok but the two brands, now merged, continued to be branded separately. Reebok's boom occured in the 1990s and famous athletic sponsorships include Shaquille O'neal of the NBA, Venus Williams, and the Manning brothers, Peyton and Eli. Today Reebok is still the official sponsor of the Ultimate Fighting Championship (UFC). Currently Reebok has no collegiate sponsorships though for a brief period in the early 2000's Reebok was the uniform designer for Boston College.

Unlike other major sportswear brands, New Balance was not founded with sports in mind. In 1906 it was founded by William J. Riley and focused on orthopedics and foot support for working class people such as police officers. In the late 1950s athletes started to ask for New Balance. In 1961 the company, under new management, released the New Balance Trackster, a shoe for running built with traction in mind. The company was sold once again but maintained its focus on high performance running shoes. Today, New Balance has footwear in running, baseball, and basketball to name a few. The British founded company has sponsorships with many of UK's track athletes and recently signed star basketball player Kawhi Leonard for a basketball shoe deal, making him one of the faces of the company. New Balance provides equipment to some universities but does not have a sponsorship with any today, having a deal with Central Michigan University until 2009.

Jordan is perhaps the most well-known shoe brand in the world. Founded when Michael Jordan created the Air Jordan 1 with Nike, the Jordan Brand has grown into one of the biggest in the world. Though owned by Nike, the Jordan Brand alone reported over 3 billion dollars of revenue in 2019. When a new Jordan shoe is released, lines form in shoe stores worldwide for people to get a chance to buy the shoes. With rare Jordans going for thousands of dollars on different sneaker markets, the brand revolutionized the sneaker business and made Michael Jordan the most money on a sneaker deal by more than double his nearest competitor. Michael Jordan, the brand's face and logo, is their most famous athlete, but others representing the brand include Zion Williamson and Jason Taytum of the NBA, and Derek Jeter in the MLB. Famous people all over the world wear Jordans. Spike Lee is known to wear colorful pairs courtside at Knicks games and donned golden Jordan shoes at the Oscar Awards. Schools affiliated directly with Jordan include the alma matter of the brand's namesake, North Carolina, and the University of Michigan.

Though in 2020 Champion is known as a more upscale streetwear brand with tracksuits and jackets, it was founded in 1919 for the University of Michigan. Champion quickly became known for being the brand of choice for collegiate bookstores across the country. The brand was known for knitwear; socks, sweatpants and sweatshirts especially. In the 1960s the brand partnered with the NCAA and NFL to provide uniforms to their teams. More recently, in the early 2000s, the brand was the official equipment provider for Purdue University as well as Notre Dame and Minnesota. Celebrities such as Chance the Rapper have been seen sporting the Champion brand, as have countless athletes who, though not sponsored, have worn the clothing on their way into a stadium. With earnings of over two billion in its centennial year, the Hanesbrand owned clothing brand exceeded expectations and has cemented itself as a brand at the forefront of the sportswear fashion industry, making a comeback that few could have seen coming.

Unlike other sportswear companies, Columbia emphasizes the outdoors and hiking in their products. Started in 1938 in Oregon as a hat manufacturer, Columbia grew into an apparel empire, accumulating a net worth of 6.3 Billion in early 2020. Columbia apparel owns other mountaineering sports apparel companies, including HardWare, SOREL, and PrAna. Hiking boots are a large draw of Columbia Sportswear's profits, as outdoor sports' popularity continues to grow. Columbia also sells cold weather gear, watches, backpacks, and other necessities for outdoor activities. Columbia's biggest sponsorship deals are with professional sports fishers and golfers, though none are considered household names. Some may argue its place on a list of sports brands, but Columbia is an international powerhouse in the outdoor sports market and rightfully belongs on this list.

Much like Columbia Sportswear, Patagonia is a brand most well known for their outdoor adventure clothing. Founded by climber Yvon Chouinard in 1953, the brand was unlike others in that it did not start with clothing, starting instead with climbing pitons. Before Chouinard, pitons were placed into a rock for climbing and left there, but his invention of sturdy pitons that could be reused fueled a business that boomed in the second half of the twentieth century. The well-known climber decided to start wearing more colorful clothing when he climbed, something that spiked his climbing friends' interest. Soon a clothing brand was born, one that he named Patagonia. From that day forward Patagonia has been at the forefront of colorful, weather resistan,t and environmentally friendly clothing for outdoor activities such as climbing. Yvon Chouinard built his company until he was worth just over a billion dollars, with Patagonia at the forefront of sustainable clothing manufacturing. Today Patagonia sponsored athletes include climbers, flyfishers, surfers, snowboarders, and ultra-marathon runners. The company has maintained popularity over the years as a leading brand for outdoor sports.