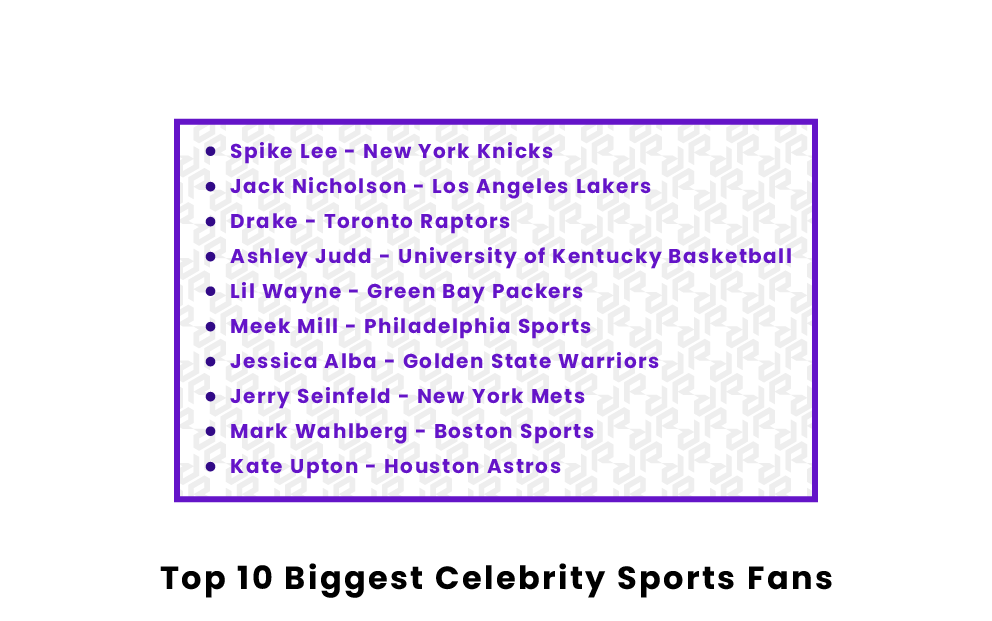 There is no cooler experience at a sports game than when you see one of your favorite celebrities enjoying the same game that you are. It is even cooler to see the celebrity show just as much, or even more passion than you are for your favorite team. Every team has celebrity fans that represent their fan base in a way. Below are the top 10 biggest celebrity sports fans.

Who are the Biggest Celebrity Sports Fans of All Time?

Spike Lee is easily the biggest celebrity fan on this list. He can be seen courtside at almost every iconic Knicks game. The film director estimates that he has spent over $10 million on Knicks tickets over the past 30 seasons. He has been a part of many infamous feuds with NBA players. His most famous was in 1994, when he chirped Indiana Pacers Hall of Famer Reggie Miller. After trash-talking and antagonizing Miller for the entire game, he proceeded to score 25 points in the fourth quarter, including his iconic eight points in nine seconds. Lee has also been on the wrong side of feuds with Michael Jordan, Lebron James, Kobe Bryant, and many more. He recently had an incident with Knicks owner James Dolan in 2020. Despite all of this, there is no bigger Knicks fan than Spike Lee.

The stars often come out for Lakers games, but none have been more consistent than Jack Nicholson. He has been the star of the Staples Center and the Forum since the Showtime Era in the 1980s. He is always seen wearing iconic sunglasses and an outfit that stands up. No other celebrity on this list has stood out at games like Nicholson. Through the Lakers’ ups and downs, he has always been a diehard fan. He is estimated to have spent over a million dollars on tickets in his lifetime. Since Nicholson is well into his 80s, he hasn’t been able to attend as many games as he once did. Despite this, he will still go down as one of the greatest Lakers fans of all time.

The Raptors are one of the newest teams in the NBA. Due to this, they don’t really have lifelong legacy fans like Spike Lee or Jack Nicholson. Instead they have Drake. Drake is from Toronto and had an iconic run as a fan of the Raptors during their 2019 championship season. He is most known for wearing a Dell Curry jersey (the father of Warriors superstar Stephen Curry) to chirp the Warriors in the finals. It all clearly worked, because the Raptors went on to win the finals.

Drake has a great relationship with the team as a whole. In 2015, center Jonas Valančiūnas broke his hand in a game in Los Angeles. Since it was so far away, team president Masai Ujiri wasn’t at the game. Drake texted him the updates on Valančiūnas from his courtside seat. Drake’s OVO brand has even inspired some of the Raptors’ recent City Edition jerseys and courts. Drake is not just a fan…he is a part of the team.

Unlike the others on this list, Ashley Judd is not a diehard fan of any professional sports team. Instead, she dedicates it all to her college alma mater, The University of Kentucky. Celebrities can be found at most big professional sports events, but it’s not too common in college. Judd expresses her pride at every game. She is loud and always cheering. She basically blends in with any current student at the school. Despite acting in various TV shows and movies, she hasn’t shied away from the place that made her. She may not be the flashiest celebrity fan, but she certainly makes it known that she is a superfan.

Many question why Lil Wayne is a Packers fan, given that he was born in New Orleans. However, New Orleans may be the only reason why he is a Packers fan at all. Lil Wayne’s father attended Super Bowl XXXI in New Orleans, which featured the Packers beating the Patriots. He came home with all kinds of Packers merchandise. One year later, the first Madden game was released, and because of all the Packers merchandise in his house, it was very simple. Wayne has since been an extremely loyal Packers fan, and is a regular at Lambeau Field. He even has a song about the Packers called “Green and Yellow.”

If there was one man to represent the entirety of the city of Philadelphia, it would probably be Meek Mill. The rapper is easily one of the most dedicated fans in all of Philly sports. He has been seen at many different 76ers, Eagles, and Phillies games. He even has a mixtape cover where he is playing hockey for the Flyers in full uniform. Not only does he make his presence known at the games, but he makes great effort to help out the Philly youth sports fans, and the city welcomes him with a standing ovation at every game.

The Warriors are known for gaining a ton of bandwagon fans during the Stephen Curry era. Warriors fans were a rare breed, but that never stopped Jessica Alba from showing her support and passion. A lot of this has to do with the fact that she went to prom with former Warriors point guard Baron Davis. She would often attend games to support her friend. This led to her becoming a superfan. Many Warriors fans can’t say they are true ride-or-die fans, but Alba certainly can.

Jerry Seinfeld is not only a lifelong Mets fan, but is also a massive fan of the sport of baseball. He does everything he can to be at as many Mets games as possible. He made tons of references to the Mets, Yankees, and other baseball teams in his show Seinfeld. On the day of Game Six of the 1986 World Series, Seinfeld had a show in Montana. He hopped on four different flights in order to make it to the game just in time.

If there was one person in the world who could represent all of New England, it would be Mark Wahlberg. New Englanders love their sports teams, but Mark is very passionate and really gets into the games. He has been seen at so many Celtics and Red Sox games, but his number one team is the Patriots. Thus, it is no surprise that Wahlberg is friends with Tom Brady. He also had Rob Gronkowski on his family reality show. A lot of his movies involve Boston sports references, like the suspenseful ending of Ted in Fenway Park, or the short Tom Brady scene in Ted 2. There is no question that Wahlberg is a passionate, but maybe stereotypical Boston sports fan.

Kate Upton is a little bit different than everyone else on this list. She is more of a fan of athletes than a fan of a team. But her husband, Justin Verlander, just won the 2022 World Series with the Astros, and she was at every game cheering him on. They have won two World Series while the couple has been together, which has contributed to her fandom. They started dating when he was on the Detroit Tigers, but he claims that she helped him with his free-agent decision. Whether she is actually a diehard Astros fan or not, she belongs on this list because of her loving support for her husband.

Who is the biggest celebrity hockey sports fan?

Jon Hamm is the biggest celebrity hockey sports fan. He is a St. Louis native and a Blues superfan. When the Blues won the Stanley Cup in 2019, they invited Hamm to the afterparty. He was seen hoisting the Stanley Cup over his head and drinking beer out of it with the players. He was also given the opportunity to call a game that the Blues coincidently won.

Who is the biggest celebrity baseball sports fan?

Jerry Seinfeld is the biggest celebrity baseball sports fan. He is a diehard Mets fan, but overall, he is just a fan of the sport itself. He has experience calling multiple games on the radio and even called four innings of a game on live television in 2010. He made tons of references to the Mets, Yankees, and baseball in his hit show Seinfeld. One of his stated retirement goals was to watch baseball every day.

Who is the biggest celebrity football sports fan?

The biggest celebrity football sports fan is Lil Wayne. He is a huge fan of the Green Bay Packers and a frequent visitor at Lambeau Field. In 2021, Lil Wayne released a track called “Green and Yellow.” This song has been deemed the Packers’ theme song. As a kid, his dad brought home Packers-themed cups and bowls when he was a kid. He always used them even though he had no knowledge of football at all. He has since fallen in love with the team.