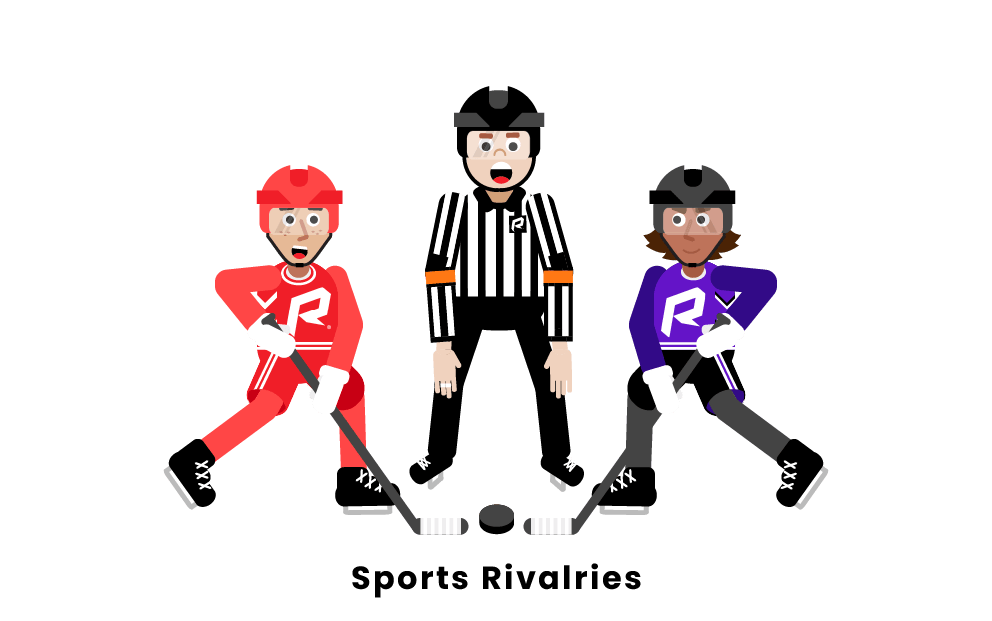 The banter between rival teams and athletes represents one of the most exciting aspects of sports for both fans and insiders. While most rivalries are usually among teams from the same city, some of the greatest rivalries of all time are among single athletes, national teams, and universities from the same conference.

What Are The Best Sports Rivalries of All Time?

No rivalry in the world creates the same tension as the “Superclasico,” the rivalry between the two winningest teams in Argentina, Boca Juniors and River Plate, who account for 75% of the soccer fans in the country.

“Los Xeneizes (Boca Juniors)” and “Los Millonarios (River Plate)” have been rivals since they were both founded in the same neighborhood, “El Barrio de La Boca,” over 100 years ago. In 257 matches through the end of the 2021-2022 season, Boca has won 90, River 84, and there have been 83 ties. The show on the field never disappoints, but the core of the rivalry is in the constant chirping between the organized fans groups (“Las Barras Bravas”) of the two teams.

Based only 10 miles apart from each other, UNC and Duke have created the greatest rivalry in college sports. Both teams are among the best sides in men’s college basketball every year and have a great tradition of developing NBA all-time greats such as Michael Jordan and Grant Hill.

As of the end of the 2021-2022 season, the Blue Devils and Tar Heels have faced each other 258 times, with UNC leading with 143 wins. The level of intensity in their head-to-head contests reaches NBA levels, while the fans cheer the whole time after camping outside the stadium the days before the games.

Regarded as the most anticipated match in international club soccer every year, “El Clasico” is the rivalry between FC Barcelona and Real Madrid CF, two of the winningest teams in soccer history. At the end of the 2021-2022 season, “Los Culers (FC Barcelona)” lead the way with 117 wins, while Real Madrid has won 104 and there have been 62 ties.

The rivalry between the two teams has a deep political meaning that goes beyond the show that they can put on the field, as FC Barcelona represents the Catalonian independentist movement that clashes against the Spanish Crown represented by Real Madrid.

Over the years, there have been many rivalries between athletes, but none has been as fierce and, at the same time, spectacular as the one between Joe Frazier and Muhammad Ali, two of the greatest boxers of all time.

The rivalry started in 1971 when the two agreed to meet for the “Fight of the Century.” The two used to be great friends, but some comments made by Ali prior to the fight sparked hostility between the two. Frazier would go on to win the fight, which led to a rematch in 1974 that saw Ali triumphing. The two met again for a final third fight in Manila, Philippines. After 14 rounds of one of the most intense bouts of all time, Ali triumphed again, getting the edge on his greatest rival.

Rivalries between Boston and New York teams are a tradition in American sports. Among these rivalries, the one between the Red Sox and the Yankees was the first one to surge, going all the way back to Babe Ruth’s move to New York in 1919. Due to the history of both teams and the level of tension on the field in each game, this rivalry is also considered as one of the best in all American sports. The Red Sox and Yankees have faced each other over 2,000 times.

The rivalry game is one of the most awaited days of the year on any college campus, especially at Ann Arbor or Columbus, the homes of University of Michigan and the Ohio State University, respectively. Similarly to the Red Sox-Yankees case, this rivalry started due to the proximity between the two states, who already share many other rivalries.

Since their first meeting in 1987, Ohio State versus Michigan has become “The Game'' due to the intensity of the rivalry and the quality of the players on the field. As of the end of the 2021-2022 season, Michigan leads with 59 to 51 wins, while “The Game” has ended in a tie only six times.

Similarly to “El Clásico,” the “Old Firm,” the rivalry between Celtic and Rangers, the two greatest Scottish soccer clubs, goes beyond the playing field. The rivalry between the two clubs reflects the great division in Scotland between the unionist and Protestant side, represented by Rangers, and the independentists and Catholics, who support Celtic.

Despite the mediocre level of Scottish football, each “Old Firm” is a must-watch for any soccer fan due to the intensity and violence of the matches. As of the end of the 2021-2022 season, Rangers lead the series with 168 wins, six more than their rivals Celtic, while there have been 101 draws in the history of the “Old Firm”.

India versus Pakistan in cricket represents the greatest rivalry in national team competitions, as the historical conflict is reflected on the playing field of the main sport in the region.

The memories of the Indo-Pakistani war have increased the ideological difference between the two countries, whose national teams never spare each other in their long and exhausting cricket contests. As of 2022, the teams have met each other 202 times in all three cricket formats (Test, ODI, and T20I). Pakistan leads with 88 wins against 71 from India, while draws have occurred 43 times.

All throughout the sixties, the eighties, and the end of the 2000s, games between the Los Angeles Lakers and the Boston Celtics were the highest display of basketball in the world. NBA legends such as Kobe Bryant, Magic Johnson, Larry Bird, Kevin Garnett, and Ray Allen have all delighted basketball fans with all-time performances during the history of this rivalry.

Often overlooked even by sports experts, the rivalry between Chris Evert and Martina Navratilova is the greatest in tennis history. The two played each other 80 times between 1973 and 1988, as they constantly met in the finals at all four grand slam tournaments.

While each match between the two was always extremely hard fought, Navratilova has the edge in almost every stat, as she has won 43 matches out of 80 and 36 finals out of 60, including 10 finals at Grand Slam tournaments. However, Evert has won more French Open finals (three to two), a tournament she won seven times in her career.

Pages Related to Top 10 Best Sports Rivalries of All Time