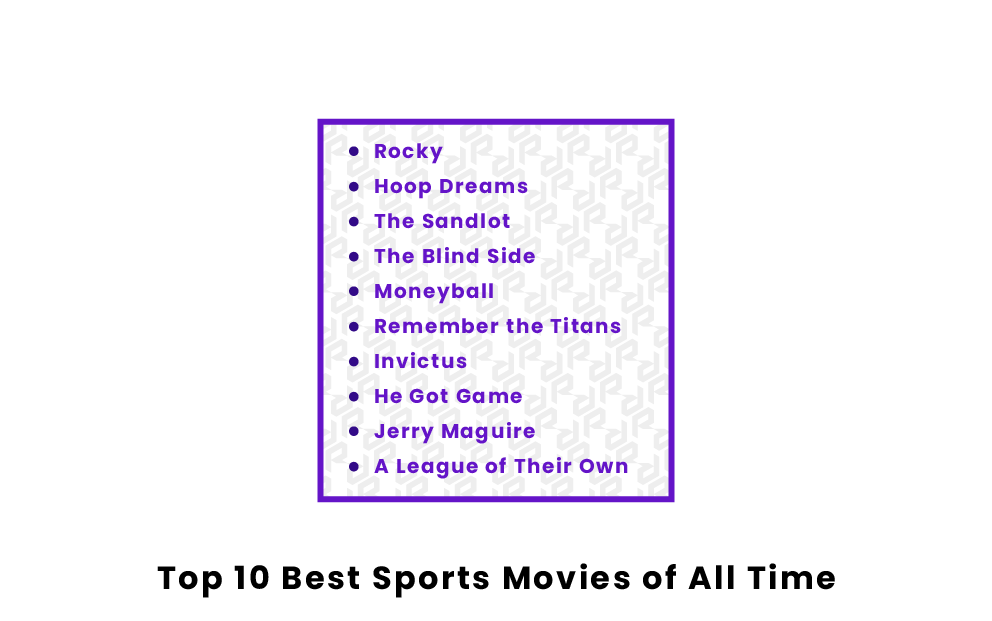 Often considered feel-good movies, sports movies have great success thanks to their inspirational storylines. Sports movies are about athletes or teams that reach glory despite the great challenges that they face due to the social context they live in or the superiority of their opponents. Now, let’s look at the ten best sports movies of all time!

What Are The Best Sports Movies Ever?

An all-time classic, “Rocky” is regarded as the greatest sports movie franchise ever thanks to the great turnout received by each of the six movies and the spin-off series “Creed.” Set in North Philadelphia, the series narrates Robert “Rocky” Balboa’s rise to the top of the boxing scene. Released in 1976, the first installment, “Rocky,” is the most iconic of the six movies. Rocky’s humility and resilience immediately stole the hearts of the audience around the world, especially those of the Italian immigrants in the United States that saw an inspiration in the character played by Sylvester Stallone.

The only documentary on this list, “Hoop Dreams” tells the heart melting story of William Gates and Arthur Agee, two of the best prospects in the high school basketball scene in Chicago.

“Hoop Dreams” is a story of sacrifice, adversity and pure love for the game, as Gates and Agee are both top recruits at St. Joseph High School, one of the best basketball high school programs in a traditionally white neighborhood. This is a challenging environment for the two African American basketball stars, who come from some of the most underprivileged areas of Chicago. Their talent and infectious smiles soon end up erasing the differences of one of the most divided social contexts in the country.

Many baseball-themed movies figure in this list, but none is as established in American pop culture as “The Sandlot.” Every year, people of all ages pick the “Squints’ or “Timmy Timmons” outfit as their Halloween costume to pay tribute to two of the main characters of this iconic sports movie.

“The Sandlot,” which takes place in the early 1960s, depicts the summer adventures of Scotty Smalls and his new crew of baseball friends in the outskirts of Los Angeles. The movie is considered a coming-of-age story, as it shows Scotty’s maturing process during the summer.

Nominated for “Best Picture” at the 2009 Academy Awards, “The Blind Side” is based on Michael Oher’s rise from homelessness to football stardom. Set in Tennessee in the early 2000s, the picture touches on themes such as racism and social disparities, and even gives an overview of the college recruiting process.

Although the movie is about Michael Oher’s story, the real star of “The Blind Side” is Leigh Anne Tuohy, played by Sandra Bullock, who becomes Michael’s guardian angel. Thanks to her, Michael goes from being forced to sleep in the high school gym to a star offensive lineman loved by the whole community, all in a span of a few months.

Inspired by the true story of former Oakland Athletics general manager Billy Bean, “Moneyball” has inspired thousands of young fans to turn their passion into a career in sports management.

Beane, played by Brad Pitt, is the general manager of a franchise that is struggling on and off the field. His unconventional thinking leads him to fire most of his staff and put all of his chips on Peter Brand, played by Jonah Hill, a young statistician with no baseball experience who will lead him to build a team purely based on metrics. Their revolutionary method will shock the MLB in a movie that has shed new light on the importance of statistics in sports.

Starring Denzel Washington as Herman Boone, the African-American high school coach hired in 1971 to coach the legendary T.C. Williams High School, “Remember the Titans” is among the best football-themed movies ever.

Similarly to other movies on this list, “Remember the Titans” portrays the coming-of-age story of a high school football team in the first season after the abolition of racial segregation in Virginia. The passion for the game and the commitment to winning unites an extremely racially-divided locker room inspired by some legendary motivational speeches from their head coach Herman Boone.

Newly-elected president Nelson Mandela, played by Morgan Freeman, has the task of creating a new national identity after decades of segregation, and finds in the 1994 Rugby World Cup the solution to bring South Africa together. Thanks to his improbable relationship with Springbok captain Francois Pienaar, played by Matt Damon in “Invictus,” Mandela will start changing minds in the country and rallying opposing social groups around the national team, which will soon become the reflection of a new and integrated country.

Among the top sports movies of all time, Spike Lee’s “He Got Game” is the only one to feature a top professional athlete as one of the main characters, as Hall of Famer Ray Allen plays Jesus Shuttlesworth, the hottest prospect in high school basketball.

In “He Got Game,” basketball is the pathway to a new life for Jesus Shuttlesworth, and the only thing that still ties him to his dad, Jake, played by Denzel Washington, who was sent to jail for the accidental killing of his wife. The two will develop a whole new relationship thanks to the game and their competitiveness.

“Jerry Maguire” is the revenge story of a top sports agent who decided to go against the system to create change and protect his athletes. After having lost his job and his clients, Jerry Maguire, played by Tom Cruise, is left with just Rod Tidwell (Cuba Gooding Jr.), with whom he will start their mutual rise back to the top.

The movie is a celebration of principles such as hard work, thinking out of the box, and standing for the right causes. Furthermore, “Jerry Maguire” sheds light on the commercial exploitation by many agents of their athletes.

Madonna (Mae Mordabito), Tom Hanks (Jimmy Dugan), and Geena Davis (Dottie Hinson) all star in a stacked cast. Their adventures around the country and their talent soon end up inspiring their coach Jimmy Dugan to change his life and help his team shock the country, delighting the audience with a lively comedy.

Hoosiers is one of the greatest basketball movies to this date, which is saying a lot considering its competition. The movie was released in 1986 from director David Anspaugh. Its’ story was written by Angelo Pizzo and is loosely based on the Milan High School team that won the Indiana state championship in 1954. In Hoosiers, it tells the story of a small Indiana high school basketball team and its coach, who overcome seemingly impossible odds to win the state championship. Norman Dale, the team's head coach, arrives at the school following the death of the team’s previous coach. At first, he faces controversy with both his players and the townspeople over whether he is fit to coach. However, in the end, the Huskers defeat a much more talented opponent to take home the state championship and relieve the hardship they all overcame.

The movie earned actor Dennis Hopper an Oscar nomination and Jerry Goldsmith an Academy Award nomination. It was chosen to be preserved by the United States National Film Registry in 2001 because of its cultural significance.

Miracle depicts one of the most amazing sports moments in all of United States history. The movie tells the real-life story of the 1980 United States Olympic Men’s Hockey Team that won the gold medal in the 1980 Winter Olympics. Released in 2004, it was directed by Gavin O’Connor and written by Eric Guggenheim and Mike Rich.

In the movie, the United States Men’s Hockey team faces a tough road filled with controversy but is eventually able to unite in an inspirational manner to advance to the gold medal round after a tough win over the heavily favored Soviet Union team. Nobody expected the U.S. team to make it that far, as they entered the tournament as heavy underdogs, let alone to stand a chance against the Soviets. However, the American team shocked the world by coming back from behind in the final period of the semi-final game, defeating the favored Soviet Union in an exciting game. The team goes on to defeat Finland and win the gold medal, ending with a message of American pride and accomplishment.

Bull Durham adds something new to the typical sports movie by mixing in a romantic comedy twist. The film was written and directed by Ron Shelton and is based on experiences in minor league baseball. It depicts the fans, players, and coaches of the Durham Bulls, a minor league team based in Durham, North Carolina. Kevin Costner stars as “Crash” Davis, the team's veteran catcher, and Tim Robbins plays “Nuke,” the team’s rookie pitcher. In the movie, Crash is sent down to the Durham Bulls, a Single A minor league team. His mission is to educate and train their new pitcher, Nuke, in order to groom him for the MLB. The two get off to a rocky start, but Crash successfully molds Nuke into a top-notch pitcher, which earns him the promotion of being called up to the big leagues. Along the way, Annie, played by Susan Sarandon, forms a romantic triangle with both of the players, adding some tension. The movie ends with a satisfying and romantic ending to the story. After Bull Durham’s release, Sports Illustrated rated the movie as the greatest sports movie of all time.

Raging Bull is an iconic American boxing film directed by Martin Scorsese. It stars Robert De Niro as Jake LaMotta, an Italian-American boxer. In the movie, Jake LaMotta faces numerous problems due to the destructive nature of his actions which have negative effects on those around him, including his brother Joey and wife Vickie. The story follows Jake through his ups and downs surrounding his impulsive and violent actions that eventually lead him to retirement, criminal charges, and significant family problems. Jake’s troubled story is emotional and captivating to witness throughout the entire movie. Despite some criticism for the movie’s intense violence, it was nominated for eight Academy Awards and won two of those. De Niro’s role in Raging Bull is highly acclaimed as one of his most infamous performances.

Pages Related to Top 10 Best Sports Movies of All Time