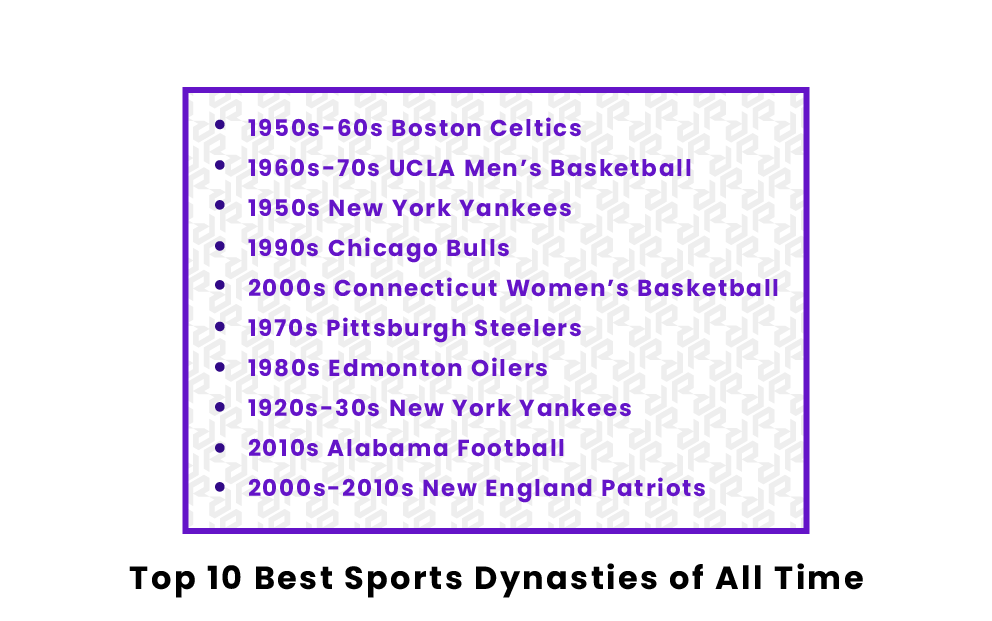 Throughout sports history, individual teams have had some incredible runs of success. Across all different sports, dynasties have popped up time and time again. A dynasty can be defined as an organization that has exhibited excellence over a long period of time. Below, ten of the greatest sports dynasties are ranked and discussed. The number of championships won as well as longevity were the main two considerations.

What are the best sports dynasties of all time?

While there have been lots of successful sports dynasties throughout history, it is hard to argue against the Boston Celtics of the 1950s and 1960s being considered the greatest of them all. From 1957-1969, the Celtics won an incredible 11 NBA championships out of 13 possible. This run included eight straight from 1959-1966 and ten straight trips to the NBA finals from 1959-1968. Throughout this time, the Celtics were led by all-time great Bill Russell. Not only was Russell an incredible player, but for the Celtics’ final two championships in 1968 and 1969, Russell was the player-coach. In other words, Russell was coaching the team and playing at the same time. Other important contributors include Sam Jones and John Havlicek.

While the Celtics dominated professional basketball in the 1960s, the UCLA men’s basketball team dominated college basketball. From 1964 to 1975, UCLA won an incredible 10 out of 12 NCAA titles. This run of ten out of twelve included seven straight championships from 1967-1973 and nine straight Final Fours from 1967-1975. Perhaps just as incredible during this time frame, UCLA won a men’s NCAA record 88 games in a row from 1971-1974. Ironically, the streak started after a loss to Notre Dame and ended with a loss to Notre Dame. At the head of this dynasty was legendary coach John Wooden. Wooden’s ten titles are still the most of any coach.

The first of two New York Yankees teams to make this list, the Yankees of the 1950s take the number three spot. Including 1949, since it was a lot of the same players, the Yankees won 7 World Series in 10 years from 1949-1958. Not only did they win seven titles, but they lost in game seven of the World Series in 1955 and 1957. Furthermore, the one year they did not make the World Series was actually their best regular season of the stretch. In 1954, they won 103 games (out of 154), but unfortunately for them, the Cleveland Indians won 111 games that year to make the World Series. Some of the Yankees’ key players included Mickey Mantle, Yogi Berra, and Whitey Ford.

The third basketball team on this list, the Chicago Bulls dominated the NBA in the 1990s. Led by arguably the greatest player in NBA history in Michael Jordan, the Bulls won six titles in an eight-year stretch from 1991-1998. These six titles were made up of two separate “three-peats,” winning three in a row from 1991-1993 and again from 1996-1998. Not coincidentally, the two years they did not win, Michael Jordan was retired from basketball and playing professional baseball. Once he un-retired, the Bulls were back to their winning ways. Other important members of this dynasty included Scottie Pippen, Dennis Rodman, and head coach Phil Jackson.

Almost as impressive as UCLA on the men’s side, the Connecticut women’s basketball team has dominated women’s basketball since the turn of the 21st century. Starting in 2000, they won four out of five NCAA titles from 2000-2004. They would go on to win back-to-back titles in 2009 and 2010, and then finished off their championship stretch winning four in a row from 2013-2016. Moreover, since 2008, Connecticut has made fourteen straight trips to the Final Four, a streak that is still active today. The leader of this dominant stretch has been head coach Geno Auriemma, who has been the coach for this entire stretch and since 1985. Some of their most talented players over the years include Dianna Taurasi, Sue Bird, Maya Moore, and Breanna Stewart.

The first football team on this list, the 1970s Pittsburgh Steelers were one the most dominant teams in NFL history. Thanks in large part to their legendary “Steel Curtain” defense and quarterback Terry Bradshaw, the Steelers won four Super Bowls in a six year stretch from 1975-1980. Additionally, the Steelers made the playoffs every year during that stretch and made it to at least the AFC championship game in five out of the six seasons. Not surprisingly, they had regular season success as well, winning at least ten out of their fourteen games every year except 1977. While Bradshaw led the offense, Jack Ham, Joe Greene, Mel Blount, and Jack Lambert anchored the aforementioned defense.

Arguably the greatest dynasty in NHL history, the Edmonton Oilers of the 1980s had an amazing seven-year stretch. After losing in the Stanley Cup Finals to the New York Islanders in 1983, the Oilers went on to win the championship five times in the next seven seasons. During the regular season, the Oilers were just as dominant, finishing in the top two in their division in six out of the seven seasons and leading the NHL in goals scored every year from 1983-1986. Similarly to the 1990s Bulls, the Oilers were led by arguably the greatest player in NHL history in Wayne Gretzky. Other valuable players included Mark Messier, Grant Fuhr, Paul Coffey, and Jari Kurri.

While not quite as impressive of a run as their 1950s counterparts, the New York Yankees of the 1920s and 1930s still were immensely talented and successful. From 1927-1939, they won seven out of thirteen World Series titles, including four straight at the end of the run from 1936-1939. The first of these teams, the 1927 Yankees, are considered by some to be the greatest baseball team ever assembled. Moreover, they finished in the top three of their American League standings every year during this stretch and won 100+ games six times (and 99 in 1938). The best players on these all-time great teams included legends Babe Ruth and Lou Gehrig.

The second dynasty on this list that is ongoing, along with the Connecticut women’s basketball team, is the football team at Alabama that continues to dominate college football. Since 2009, they have won six national titles. Of those six, three were BCS National Championships, which no longer take place, and three are College Football Playoff (CFP) Championships, which has been in place since 2015. Since the CFP’s inception, Alabama has made the playoffs every year except in 2020. In total, Alabama has made the national championship game nine times since 2009, stretching over the two championship formats. Led by legendary coach Nick Saban, Alabama has produced dozens of successful NFL players over this stretch as well.

The final team on this list, the New England Patriots of the 2000s and 2010s are without question the most successful NFL team of the 21st century. Starting in 2001, the Patriots made it to nine Super Bowls and won six of them from 2001-2018. Moreover, from 2001-2019, they won the AFC East division a ridiculous 17 times in 19 years and thus made the playoffs 17 times in that same stretch. While there were obviously a lot of key parts due to the length of this dynasty, all-time greats Tom Brady (quarterback) and Bill Belichick (head coach) were the anchors of this impressive run.

While the fifteen dynasties listed below did not quite make the cut for the top ten, they still deserve some recognition as honorable mentions. They are listed in chronological order.

Pages Related to Top 10 Best Sports Dynasties of All Time