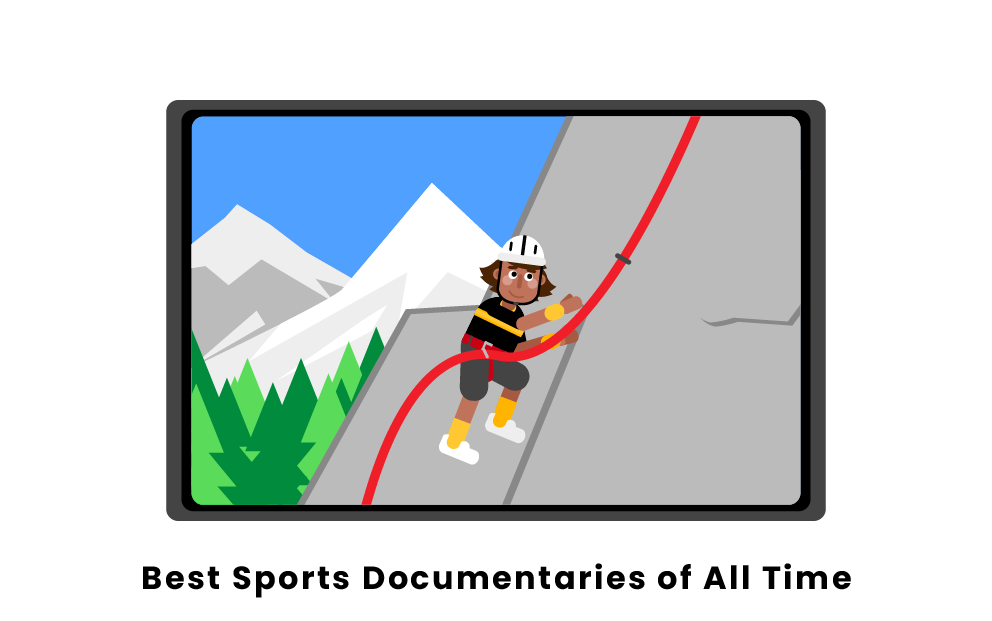 What are the best sports documentaries ever?

Free Solo is a documentary directed by Elizabeth Chai Vasarhelyi and Jimmy Chin, and released in 2018. It won the Academy Award that year for Best Documentary Feature. The film documents Alex Honnold’s free solo of El Capitan (free soloing means rock climbing without harnesses, ropes, or other equipment). El Capitan is a 3000+ foot wall of granite in California’s Yosemite valley. It’s likely the most famous climbing destination in the entire world, and one of the tallest too. Alex Honnold’s feat of climbing it without ropes is one of the great athletic feats in all of human history. Combined with stunning cinematography and a deeply moving human story, it makes for an unforgettable documentary.

2. When We Were Kings

The 1996 documentary, When We Were Kings, directed by Leon Gast, documents the legendary “Rumble in the Jungle” boxing match between Muhammed Ali and George Foreman. The match was a controversial one set in what is now the Democratic Republic of Congo and was funded in part by the dictator Mobutu Sese Seko, who had overseen widespread human rights violations across the country. The documentary features much of the lead-up to the fight, including extensive interviews with Ali. It culminates with footage of the actual fight itself, which was intensely exciting. Leon Gast took over 20 years to finish editing the film, but it was worth the wait, as When We Were Kings took home the academy award for Best Documentary Feature in 1996.

Being one the most iconic documentaries of all time, Hoop Dreams is an essential watch among sports documentary fans. The film chronicles the story of two African-American teenagers, both of whom aspire to make a career of playing professional basketball. Hoop Dreams is enormously dramatic and an incredibly moving cinematic experience. In fact, it’s one of the most critically-acclaimed documentaries ever made, having won the Audience Award for Best Documentary Feature at the 1994 Sundance Film Festival, among many other awards. It has also been included in the Library of Congress’ National Film Registry, which only includes films that have been deemed of enormous cultural significance.

When Icarus was released, it created a wave of international shock and outrage. Icarus was released in 2017 and directed by Bryan Fogel. The film documents the director’s journey learning about how doping (performance-enhancing drugs) is used in amateur cycling. But when Fogel solicited advice from the head of the Russian anti-doping agency, he happened upon a massive doping scandal that revealed that Russia had been conducting a state-sponsored doping program for its Olympic athletes for years. The film stirred a massive controversy in the sports world and received massive critical acclaim, including the Oscar for Best Documentary Feature in 2017.

In baseball, one of the greatest feats a pitcher can achieve is known as a “no-hitter.” A no-hitter is quite simple - it’s when a pitcher doesn’t allow a single hit over the course of an entire game. It’s an incredibly difficult feat, and many great pitchers will go their entire lives without ever throwing one. Dock Ellis, the subject of No No: A Dockumentary, managed to throw a no-hitter, although Dock’s was thrown under extraordinary circumstances: he was high on LSD. The documentary chronicles the life of a fantastic pitcher and culminates in the most surprising no-hitter ever thrown. The 2014 film, directed by Jeff Radice, is one of the most fascinating sports documentaries around.

Senna is a 2010 documentary that examines the life and achievements of the legendary motorsport driver Ayrton Senna. The film is directed by Asif Kapadia, who also directed other critically-acclaimed documentaries such as Amy and Diego Maradona. Senna documents the astonishingly-successful career of one of the great Formula One drivers of all time, but it also offers a behind-the-scenes glimpse into some of the complex relationships that guided Senna’s career. One of the key narratives in the film is the super-rivalry between Senna and Alain Prost - another one of Formula One’s all-time greats. Senna is dramatic, moving, and features footage that ranges from intense to heartwarming.

Directed by Billy Corben and released in 2009, The U premiered on TV with massive anticipation. In fact, the premiere garnered over two million viewers at the time of its release. The film was part of ESPN’s “30 for 30” campaign, which oversaw the production of 30 sports documentary features in celebration of the network’s thirtieth anniversary. The series was a huge hit, though The U was likely the most popular of all of them. The film outlines the culture of the University of Miami football team in the 1980s, which saw a massive shift amidst events and societal changes in both Miami and the University.

A ten-episode miniseries, The Last Dance tells the story of the ever-fascinating life and career of one of basketball's greatest players: Michael Jordan. Despite being a household name, not many people know the man, Michael Jordan, as much as the name. The Last Dance offers a glimpse behind the curtain of one of the most successful people in sports, and tells the story of how he came to be one of the greats. The series was produced by both ESPN and Netflix and was directed by Jason Hehir. It was released in 2020 to widespread acclaim.

In terms of sports documentaries, A Sunday in Hell was well ahead of its time. The film follows one cycling race in Paris, France, the 1976 Paris–Roubaix. The race is one of the most difficult single-day cycling races in the world, as much of it takes place over cobbled roads that are narrow and far from ideal for cycling. A Sunday in Hell documents the chaos of the race through every twist and turn, and does so with incredible visual style and a compelling soundtrack. The film was directed by Jørgen Leth and released in 1976. It still has a loyal following and remains beloved even to this day.

The soccer star Diego Maradona achieved a level of superstardom that only few can dream of. When he signed with the Napoli football club in 1984, it was truly an earth-shattering event for the Italian city of Naples. What transpired was a level of skill and dominance that had the entire world on notice. The 2010 documentary bearing his name chronicles Maradona’s incredible career from beginning to end, and there’s no shortage of drama at any point. Like Senna, Diego Maradona was directed by the prolific Asif Kapadia. The Maradona story is one of the most fascinating in all of sports, and the documentary is absolutely worth a watch.

Pages Related to Top 10 Best Sports Documentaries of All Time