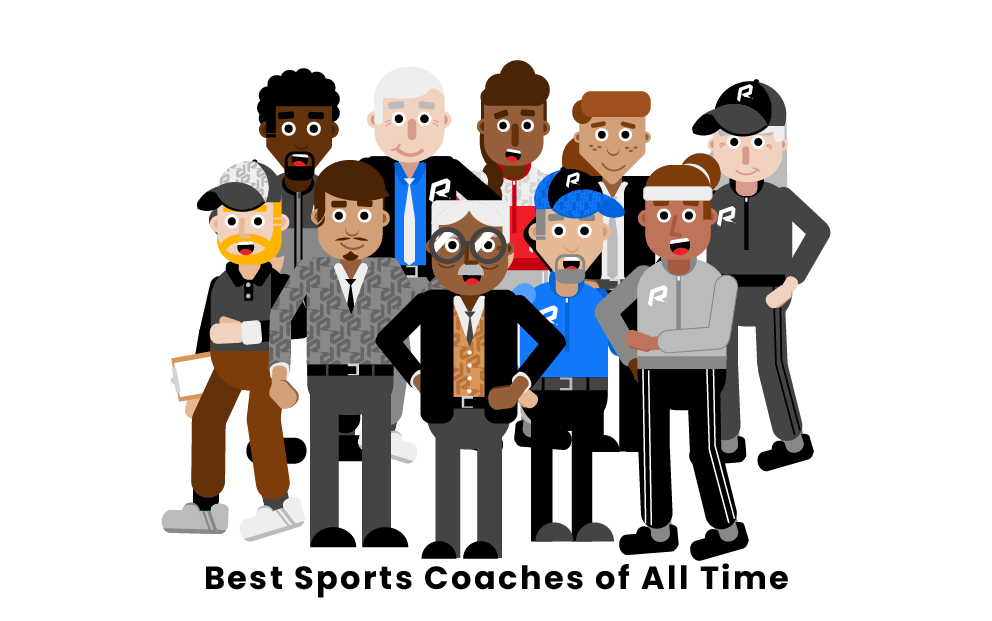 The greatest sports teams would not be the same without a coach to call the plays and lead the players. Coaches play a special role in sports: they must be respected and knowledgeable about their sport while also thinking on their feet. This list includes the top ten coaches across all sports.

Who are the best sports coaches of all time?

John Wooden, nicknamed the “Wizard of Westwood,” is undoubtedly one of the most successful sports coaches ever. Wooden became famous as head coach of the UCLA men’s basketball team. Between 1964 and 1975, Wooden coached the Bruins to 10 national championships in 12 seasons, including a run of seven straight national championships. Never before has a coach displayed such dominance in any sport.

Wooden’s teams performed at a level consistently higher than that of their competition. While Wooden was coach of the UCLA Bruins, they won 620 of their 767 games, an astonishing 80% of their games.

Vince Lombardi was easily one of the best football coaches of all time, who made his legacy with the Green Bay Packers. Lombardi was born in June of 1913 and passed away in September of 1970.

Before being an NFL coach, Lombardi coached at St. Cecilia High School and two colleges: Fordham and West Point. Fordham held a special place in Lombardi’s heart, as that’s where he studied. Lombardi got his professional coaching start with the New York Giants when he was 41 years old. Lombardi was with the Giants for five years.

When Vince Lombardi arrived in Green Bay, the Packers were coming off a season where they only won a single game. Lombardi quickly turned that around, posting a 7-5 record in his first season. The winning culture he employed in Green Bay played a big part in the years of success to follow, including five NFL Championships and two Super Bowl victories.

William Scott Bowman, better known as Scotty Bowman, is a retired NHL coach. Bowman is easily the greatest hockey coach of all time, famous for winning nine Stanley Cups, more than any other NHL coach in history. He also has the most wins by any NHL coach ever with 1,244; nobody else even has 1,000 wins.,

He also coached the St. Louis Blues, Montreal Canadiens, Buffalo Sabers, Pittsburgh Penguins, and Detroit Red Wings from 1967-2002. Bowman won Stanley Cups with three different NHL franchises, five with the Canadiens, one with the Penguins, and three with the Red Wings.,

William “Bill” Belichick is the head coach for the New England Patriots of the NFL. In addition to being the head coach of the Patriots, he is also the general manager, meaning he has full roster control.

Belichick has coached for a few different NFL teams, starting with the New York Giants (1979-1990). After that, he coached the Cleveland Browns from 1991-1995, followed by a one-year stint with the Patriots in 1996. Belichick spent 1997-1999 with the New York Jets before returning to the Patriots in 2000, where he has been ever since. Bill Belichick and Tom Brady were arguably the greatest player-coach duo football has ever seen, winning six Super Bowls together between 2002 and 2019.

Finally, in 1958, Bryant became the head coach of his alma mater: Alabama., He ruled with an iron fist, causing many players to quit the team. However, he led the Crimson Tide to massive success, including six National Championship and 13 Conference championship victories, that established the excellence that remains with the program to this day.

Phil Jackson is most well-known for coaching Michael Jordan and the Bulls, who were arguably the greatest basketball team of all time. However, Jackson did not merely ride the success of his players: he is also perhaps the best NBA coach of all time. Jackson won 11 NBA Championships as a head coach: six with the Bulls, five with the Lakers. He also won over 70% of the NBA games he coached, with a final record of 1155-485.

Jackson attributes his phenomenal success to his life and coaching philosophy. He was even nicknamed the “Zen Master” thanks to his affinity for Eastern Philosophy and his overall holistic approach.

Patricia Susan Summitt (1952 -2016) was a women’s college basketball head coach. Summitt got her start as coach of the University of Tennessee Volunteers when she was only 22 years old. Her early coaching days were humbling as her team was underfunded, and she was forced to take on many extra responsibilities.

Pat Summitt rallied though and coached the University of Tennessee for 38 years, winning 8 NCAA championships and an amazing 84% of her games. She is credited with building the foundation of Tennessee’s women’s basketball program and garnering national respect for her astonishing tenure.

Popovich credits much of his success to Larry Brown. Brown coached at the University of Kansas, and Popovich actually took a year away from Pomona-Pitzer to work under Brown. During this season, they formed a strong bond, and Brown helped Popovich earn his assistant coaching role with San Antonio, his first gig with an NBA squad.

Michael William Krzyzewski, nicknamed “Coach K,” is a retired men’s basketball coach. Coach K was the head coach of the Duke Blue Devils from 1980 to 2022, where he won five national championships, the second most NCAA championships of all time.

After serving in the U.S. Army from 1969 to 1974, Krzyzewski began his coaching career with the Indiana Hoosiers in 1974. Then, he briefly returned to West Point, his alma mater, to be the head coach of the men’s basketball team. After five years coaching with West Point, he was named head coach of the Duke University Blue Devils in 1980. Krzyzewski spent the rest of his coaching career with Duke, dominating the ACC (Atlantic Coast Conference) with 15 total championship titles. Krzyzewski retired following the 2021-22 season with an remarkable record of 1,202 wins and 368 losses.

Pat Riley was born and raised in 1940s upstate New York. After college, Riley played in the NBA from 1967-1976 for the San Diego Rockets, Los Angeles Lakers, and finally for the Phoenix Suns. Just a few years after retiring, Riley became an NBA assistant coach for the Lakers. After two years (1979-1981), he began a 10-year tenure as head coach of the Lakers. With powerhouse talents like Magic Johnson and Kareem Abdul-Jabbar, Riley led the Lakers to five NBA championships in what is now known as the Showtime Era (1981-1990).

Riley also coached for the New York Knicks (1991-1995) and Miami Heat (1995-2003). Once Riley retired from coaching, he became an NBA team executive for the Heat, winning two NBA championships and one NBA Executive of the Year award.

Pages Related to Top 10 Best Sports Coaches of All Time