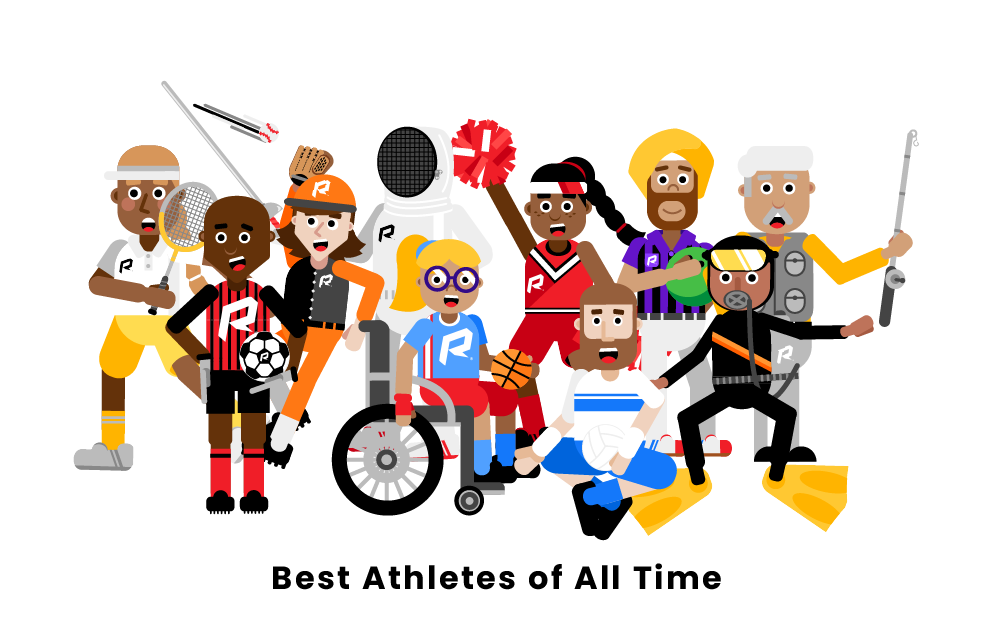 Athletes spend countless hours dedicated to their sport(s) to be the best at what they do. There are more than 85,000 professional athletes in the world, and it is very difficult to pick ten people who are better than the rest. However, these ten athletes are arguably some of the most decorated and respected athletes of their time.

Who Are the Best Sports Athletes of All Time?

Jim Brown, born in 1936, was drafted sixth overall by the Cleveland Browns in 1957. Brown was a decorated athlete, as he played football, lacrosse, basketball, baseball, and track throughout college at Syracuse University. He is considered one of the greatest athletes of all time because of the long list of accomplishments he has obtained in the many sports he’s played. He played professional football from 1957-1965 and is still considered the greatest running back of all time due to him leading the NFL in rushing yards in eight of the nine seasons he played. However, many people think Jim Brown was a better lacrosse athlete than a football player. After his time playing football, Brown pursued an acting career until 2004.

Michael Jordan is well known for being one of the greatest basketball players of all time after not getting much success during his high school years. However, after Jordan got to UNC, he never looked back. In 1982, Jordan scored the game-winning shot in the NCAA Championship as a freshman. After his junior season, he was drafted third overall by the Chicago Bulls. Michael changed the style of professional basketball and also played a couple of years in minor league baseball before retiring from sports in 2003. Jordan has two Olympic gold medals, five NBA Championships, nine NBA All-Defensive First Team honors, and ten All-NBA First Team honors.

Tom Brady was a sixth-round New England Patriots draft pick in 2000. He attended the University of Michigan after being drafted in 1995 by the MLB’s Montreal Expos, in which he declined. After not playing his first two years at Michigan, Brady took the Wolverines to their Orange Bowl victory in 1999. After being drafted, Brady was back to sitting on the bench until Drew Bledsoe got injured in the second game of the 2001 season. Once Brady started, he could not be stopped, winning three Super Bowls in four years. Brady is also the first player to be unanimously chosen as league MVP and still holds the most Super Bowls won by a player, with seven.

Serena Williams is the oldest women’s tennis player to win a Grand Slam title. She began her professional tennis career at 14 and won her first Grand Slam at 17 years old. She has been playing professional tennis for the last 26 years and has decided that 2022 would be her last. She is one of the most transformational tennis players, and many newcomers have striven to match her aggressive and powerful play style. Williams has also won four Olympic gold medals (three in doubles, one in singles). She has also won the Best Female Tennis Player ESPY award, BET Award for Female Athlete of the Year, and Harris Poll Top 10 Favorite Female Sports Star.

Wayne Gretzky began his NHL hockey career in 1979 for the Edmonton Oilers. His career flourished, and he made the sport of hockey look easy. He is still the all-time NHL leading scorer with 2,857 points and is the only player to reach 2,000 points. It only took Gretzky 11 seasons to pass this record that was set by Gordie Howe after the 26 seasons it took for him to set the record. Wayne holds or shares 61 NHL records, including most goals and most assists. He was also the leading scorer in six international tournaments, including all four Canada Cups he played in. Gretzky retired in June of 1999, and, two months later, he was inducted into the Hockey Hall of Fame after the three-year induction waiting period was waived.

Babe Ruth began his MLB career in 1915 at 20 years old after playing on the Baltimore Orioles minor league team for a year. He played for the Boston Red Sox from 1915-1919 as a pitcher, where he won 87 games and three World Series Championships. However, Babe Ruth is best known for his time playing for the New York Yankees. As a Yankee, Ruth moved to the outfield and hit 25 more home runs than his season before, becoming the first batter to hit 50 home runs in a season, hitting 54 total. He won four more World Series with the Yankees before retiring in 1935.

Simone Biles is the most decorated female gymnast in the United States. She became the first woman in 42 years to win four straight U.S. all-around titles. At 19 years old, she attended her first Olympics, where she won four gold medals and one bronze. She also competed in the World Championship for the first time at 16 years old, where she won three gold medals, one silver, and one bronze, and she continued to compete until 2019. Simone retired from the gymnastic world after the 2020 Olympics, where she only competed in two events, winning one silver and one bronze medal. Biles has since taken a break from gymnastics for two reasons: the immense pressure of perfection placed on her at such a young age and other mental health reasons, and because she developed the “twisties,” where gymnasts lose spatial awareness while competing.

Muhammad Ali began his boxing training at 12 years old. He did not make his first amateur debut until 1954, when he won by a split decision. Four years later, Ali won the light heavyweight division in the 1960 Rome Summer Olympics from two unanimous decisions, one knockout, and one comeback against three-time European champion Zbigniew Pietrzykowski. His amateur record was more than 100 wins and eight losses. He began his professional career in October of 1960, and until 1963, Muhammad’s record was 19-0 with 15 wins by knockout. He retired at age 39 with a record of 56-5 with 37 wins by knockout.

Michael Phelps began his Olympic debut at 15 years old at the 2000 Sydney Olympics. He placed fifth in the 200m fly. Four years later, Phelps left Athens with six gold medals and two bronze, falling just short of breaking the record for most gold medals won at the Olympics. Instead, he broke this record by winning eight gold medals in the 2008 Beijing Olympics, where he broke seven world records, one of which he still holds. Phelps retired in 2016 after becoming the most decorated men’s Olympian of all time. He now runs the Michael Phelps Foundation, where he tries to influence the sport of swimming and promotes healthy life choices.

Bo Jackson was a phenomenal athlete in both baseball and football, landing spots on professional teams in both sports. Jackson wanted to make sure he could be his best at both sports and turned down several offers before he was confident about his abilities. Right out of high school, Bo was drafted by the New York Yankees but declined so he could attend Auburn University to play football. There, he won the Heisman Trophy in 1985 and was an All-American running back in 1983 and 1985. He was then drafted first overall by the Tampa Bay Buccaneers but declined and reentered the draft in 1987, where he was drafted by the Oakland Raiders. From 1987 to 1991, Bo Jackson played two professional sports before injuring his hip, forcing him to retire from football and play three partial seasons in baseball.

Pages Related to Top 10 Best Sports Athletes of All Time