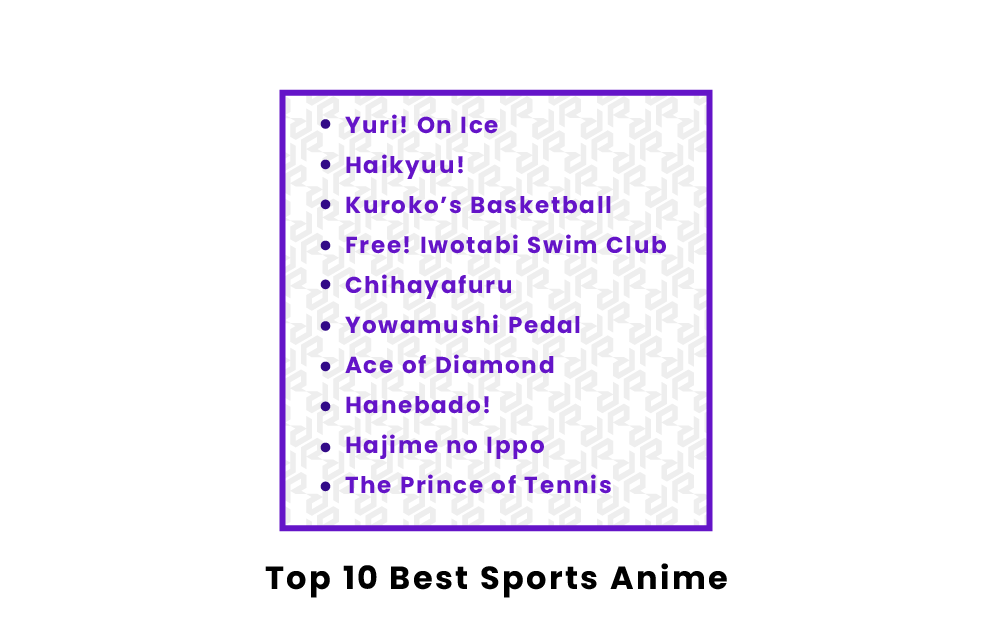 Anime is a style of Japanese animation known for portraying a blend of drama, comedy, romance, and slice-of-life narratives. One genre in particular that fans love is sports anime. From ice skating to baseball, tennis to boxing, sports anime illustrate the drama of team rivalry, the aching disappointment of losing, and the thrill of winning and being dubbed the best player. Listed below are the top 10 best sports animes to watch on platforms like Crunchyroll, Netflix, and Hulu.

What is the best sports anime ever?

Yuri! On Ice follows the story of Yuri Katsuki, a 23-year-old figure skater who reflects on his future in the sport after a disappointing finish at his latest skating event. While navigating feelings of inadequacy, the protagonist develops a heartwarming relationship with his skating idol, Victor Nikiforov, while training to become one of the best ice-skating stars. Yuri! On Ice, which was first released in 2016, was written by Sayo Yamamoto and directed by Jun Shishido.

Haikyuu! centers around Shouyou Hinata, a young boy who plays on a highly competitive volleyball team at Karasuno High School. Created by Wakana Okamura, each episode is filled with intense drama as Hinata and his teammates play volleyball against many opposing teams. Based on Haruichi Furudate’s manga, the anime includes three seasons of adrenaline-filled action to see who is the best volleyball team in the league.

Kuroko’s Basketball, which premiered in 2012, follows the story of five players who competed on the same basketball team at Teiko Middle School. Years later, Ryota Kise, Shintaro Midoriama, Daiki Aomine, Atsushi Murasakibara, and Seijuro Akashi end up competing against each other at other high schools. Each episode pumps fans’ adrenaline as they sit on the edge of their seat to see who will win each basketball game. Kuroko’s Basketball, which aired from 2012 to 2015, stars Chiwa Saito (as Riko Aida) and Junichi Suwabe (as Daiki Aomine).

Free! Iwatobi Swim Club, which premiered in 2013, focuses on Rin, the protagonist, as he competes against his old swim mates Nagisa, Makoto, and Haruka at the Prefectural Tournament. This anime is filled with on-the-edge-of-your-seat action as the high schoolers compete against each other in rigorous swim matches. Free! Iwatobi Swim Club stars Jamie Marchi (who voices Gou Matsuoka), Mamoru Miyano (as Rin Matsuoka), and Johnny Yong Bosch (as Makoto Tachibana).

In Chihayafuru, Chihaya Ayase is introduced to karuta, a card game, and becomes obsessed with it after joining the Shiranami Society. Fans enjoy watching Chihaya compete in hopes of becoming dubbed the Queen of Karuta while also reconciling her friendship with Taichi, an old acquaintance. This anime, which is inspired by the Ogura Hundred Poets series, premiered in 2013, and the manga won an award in the shoujo category.

Yowamushi Pedal follows the tale of Sakamichi Onoda, a young teen who attempts to revive an anime club at his high school and, while doing so, enters a 90-kilometer bicycling race against Shusuke Imaizumi. Each episode is filled with intense drama and competition as Sakamichi and Shusuke compete against one another. The anime, which was first produced in 2013, stars Daiki Yamashita (who voices Sakamichi Onoda), Kosuke Toriumi (as Shunsuke Imaizumi), and Kentarou Itou (as Jin Tadokoro).

In Ace of Diamond, Eijun Sawamura joins Seidou High School in hopes of becoming the best baseball pitcher in Japan. As Eijun adjusts to his new team, he competes for the number one spot against Satoru Furuya, another talented pitcher. Fans of this anime are enthralled by the fast-paced narrative and competition among several baseball teams. Ace of Diamond, which ran between 2013 and 2015, includes 75 episodes and stars Ryouta Oosaka (as Eijun Sawamura) and Nobunaga Shimazaki (as Satoru Furuya).

Nagisa Aragaki, a female badminton player in Hanebado!, mistreats other players on her high school badminton team after she loses a match at the National Junior Badminton Tournament. She, however, must fully face her anger and fear of loss when she is forced to team up with Ayano Hanesaki, the player who beat her at the tournament. This anime is not only filled with intense competition but also heartwarming moments between Nagisa and Ayano, who try to heal each other’s hearts. Hanebado! premiered in 2018 and has a total of 13 episodes that star Hitomi Ohwada (as Ayano Hanesaki) and Miyuri Shimabukuro (as Nagisa Aragaki).

In Hajime no Ippo, Ippo Makunouchi, a teen who is constantly bullied, becomes trained by infamous boxer Mamoru Takamura at the Kamogawa Boxing Gym. Ippo’s hard-work ethic helps him quickly become a great fighter in the ring. Airing between 2000 and 2002, Hajime no Ippo provides a blend of drama, romance, and comedy in each episode. This anime, which has a large cult following, stars Kohei Kiyasu (who voices Ippo Makunouchi) and Rikiya Koyama (as Mamoru Takamura).

10. The Prince of Tennis

Ryouma Echizen, a talented tennis player, leaves America and moves back to Japan to join the Seishun Boys’ tennis team. He must learn how to cooperate with his new teammates in order to win the Kanto Regionals and Tokyo Prefectural tournament. The anime, which ran between 2001 and 2005, provides in-depth backgrounds on each character as they train and compete to win. The Prince of Tennis, a beloved sports anime, was created by Takeshi Konomi and directed by Takayuki Hamana.