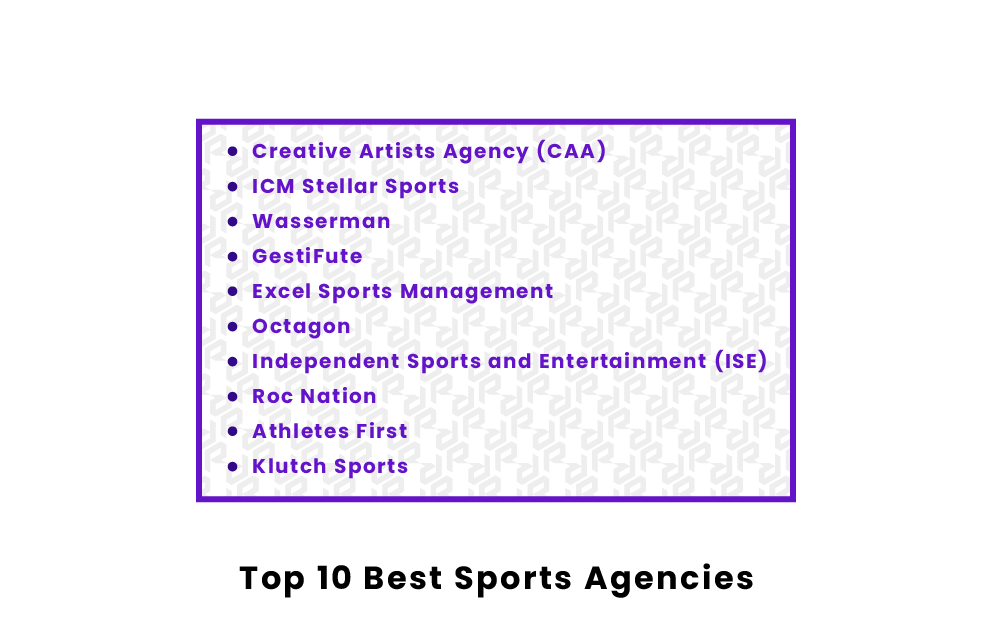 As athletes are constantly among the top earners in the entertainment industry every year, agencies are starting to acquire a fundamental role in the sports world. Players have become money-making machines, meaning that agents also have to take care of their personal brands, rather than just negotiate contracts. Let’s now take a look at the 10 best sports agencies in the world!

What are the Best Sports Agencies in the World?

Founded in 1975, Creative Artists Agency (CAA) has become a true powerhouse in American sports. The agency, currently headed by James Burston, can count on almost 2,000 employees and over 3,000 clients. The CAA headquarters are in Beverly Hills, California, a strategic location, as the agency has clients not only in the sports industry but also in the music and film sectors. On the sports side, most clients are among the top performers in the five biggest US professional leagues. These include NBA stars Chris Paul, Zion Williamson and Paul George, and baseball sensation Shoei Ohtani from the Los Angeles Angels.

ICM Stellar Sports was created in 2001 as a soccer agency based out of London. Now, 21 years later, the agency is still headquartered in London, and has expanded to other sports, such as football, rugby, golf and even esports. Captained by legendary agent Johnathan Barnett, ICM Stellar Sports represents 694 soccer players, including French prodigy Eduardo Camavinga and England starting goalkeeper Jordan Pickford. Barnett and ICM Stellar Sports are best known for the $100 million transfer of Welsh legend Gareth Bale from Tottenham Hotspur to Real Madrid and the transfer of Jack Grealish from Aston Villa to Manchester City.

Located minutes away from the CAA headquarters, Wasserman is one of the biggest agencies in the Los Angeles area. Similarly to CAA, the agency has clients across the whole entertainment industry, including actors and singers. The agency was founded in 1998 by current president Casey Wasserman, and now represents athletes in the top five professional US leagues, golf, international soccer, and even action sports. Specialized in the promotion of brand and advertising initiatives, Wasserman’s clients include top sports clubs such as Brighton Football Club and the Dallas Cowboys, while also working for tournaments such as Wimbledon.

GestiFute is one of the most popular soccer agencies in the world. Founded in 1996 by legendary sports agent Jorge Mendes, GestiFute is headquartered in Porto, Portugal, and can count on 135 clients across Europe’s top soccer leagues. Following his tactic of mainly targeting young talent coming up in the Primeira Liga, the top-flight league in Portugal, Jorge Mendes has quickly become one of the most influential people in the sport. His clients include stars such as Bernando Silva, Rafael Leão, and Darwin Núñez. However, Mendes and GestiFute are best known for representing the interests of all-time great Cristiano Ronaldo during his whole career.

Excel Sports Management is among the youngest sports agencies, as it was founded only 20 years ago. In a short time, Excel has become one of the leaders in the representation of sports brands, properties, and athletes. The agency, founded by top basketball agent Jeff Schwartz has now opened offices in New York, Los Angeles, Miami, Dallas, Chicago, and even London. Excel clients include NBA stars like Kevin Love and Brandon Ingram and golf player Justin Thomas. However, the agency is mostly specialized in the representation of franchises, counting on the Boston Celtics, the Chicago Bulls, and Austin FC among their top properties.

In 40 years of activity, Octagon has conquered the whole US sports market, opening almost 50 locations across the country. In recent years, the agency has gone global, creating offices all over Asia, Europe, the Middle East, and even South Africa. Octagon is present in almost any sport, as the agency has clients in almost all sports, even representing coaches such as Stanford Football head coach David Shaw and Washington Nationals manager Dave Martinez. The NBA is the league where Octagon has its biggest influence, representing stars like Bam Adebayo and future Hall of Famers such as Giannis Antetokounmpo and Stephen Curry.

Headquartered in Beverly Hills, just like CAA and Wasserman, Independent Sports and Entertainment is among the sports marketing agencies that are rising in the US market. Unlike other agencies, ISE is mainly focused on American sports at all levels. ISE’s top athletes include baseball Hall of Famer David Ortiz and former Heisman winner Devonta Smith. Most of the agency’s premier clients are, however, on the properties side, especially in college sports. ISE not only represents professional teams such as the Chicago Fire or the whole WNBA but is also really present in college sports with clients such as College Football Playoff and the Sugar Bowl.

Established by rapper Jay-Z in 2008, Roc Nation is one of the most global sports and entertainment industries, having a great influence on both American and European sports. The agency currently has offices in three locations: New York, Los Angeles and London. Thanks to Jay-Z’s vast influence, Roc Nation has ties with the music industry, including Rihanna and Meghan Thee Stallion. Most RocNation clients are spread across the NBA with players such as LaMelo Ball and in the NFL with Jaire Alexander and Saquon Barkley. International soccer stars such as Romelu Lukaku and Kevin de Bruyne are also represented by Jay-Z’s agency.

In recent years, top football agent David Mulugheta has converted Athletes First into one of the top agencies for NFL players. Athletes First was founded in 2001 and has its headquarters in Orange County, California, and offices in New York, Georgia and Texas. Each year, Athletes First adds some of the best talents coming out of college football, as shown by the fact that the agency has 100 first-round picks among its clients. The agency has also negotiated the largest contract in the league’s history five times, including the deal to keep Aaron Rodgers on the Packers in 2022.

Similarly to GestiFute in soccer, Klutch Sports owes a great share of its success to an all-time great of the game, LeBron James. After years as LeBron’s agent, Rich Paul created Klutch Sports in 2012, and is now established in Los Angeles. Most of Klutch Sports’ activity is concentrated in the NFL and in the NBA, where the agency is constantly negotiating multi-millionaire contracts every summer. Klutch Sports’ clients include NFL All-Pro Myles Garrett, NBA All-Stars Draymond Green, Zach Lavine, Dejounte Murray, and Anthony Davis. WNBA stars like A’Ja Wilson headline the women’s division of the agency.